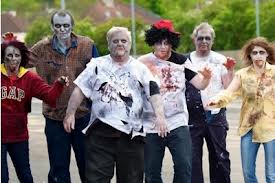 An award-winning youth arts project in Paisley based on zombies has gained a new lease of life.

The outcome was a film and graphic novel that scooped two awards: the national Creative Scotland Awards 2012 for ‘the best community arts project’ and the ‘Youth project of the year’ at the Positive About Youth Awards. Now, the success of the project has led to a youth arts group continuing its work in developing graphic novels to encourage more young people to take part in creative arts.

Councillor Jim Harte, Convener of Renfrewshire Council’s Sport, Leisure and Culture Policy Board said: “The staggering success of the original Zombie project has lead to the creation of a youth arts group in Ferguslie Park area.

“Young people are now working with a professional illustrator to create their next graphic novel and this will be used by school libraries throughout Renfrewshire to support young people with literacy issues.

“This project has been funded by the Scottish Book Trust Live Literature Fund and the novel will be launched in April 2013. This is a great example of how community involvement generates even more opportunities.”

These sessions were designed to inspire young people to consider a career in the creative sector.