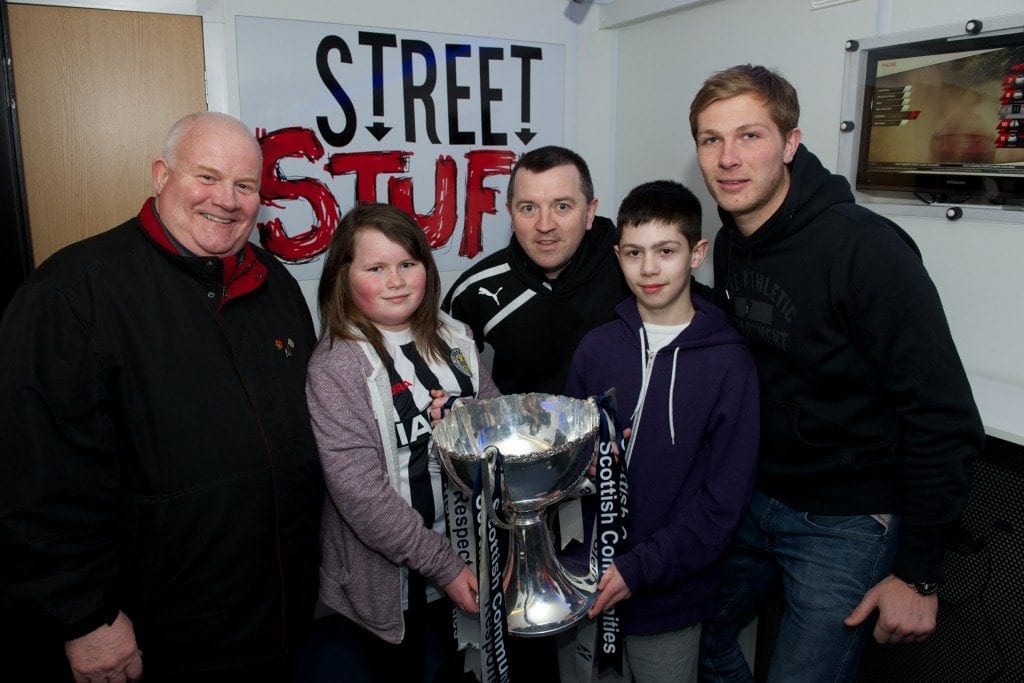 Street Stuff thinks outside The Box

The award-winning youth diversionary scheme offers a range of activities for young people around the area, including The Box – a moveable venue packed with computer-game equipment, and street football with coaching from St Mirren.

And thanks to a recent cash boost, Street Stuff bosses have been able to up the number of Boxes from one to five.

The Boxes come equipped with Xbox, Playstation and Wii computer games as well as karaoke machines.

They will be stationed in areas which don’t already have similar facilities, or which have above-average rates of anti-social behaviour.

And Marc provided an extra treat for the youngsters by bringing along the Scottish Communities League Cup, ahead of St Mirren’s Hampden showdown with Hearts later this month.

They were joined by Street Stuff staff, and representatives from Strathclyde Police and Renfrewshire wardens.

Councillor Devine said: “Street Stuff really is a superb project, and deserves the praise it has been getting.

“Recently, it was the subject of discussion in the Scottish Parliament, where a motion praising it received cross-party support.

“There have also been calls for the Scottish Government to look into extending the programme nationwide, which is a great tribute to all involved.

“I would like to thank the many people who make this programme happen – both the volunteers who give up their time to help, and staff from the various organisations behind it.

“Their energy, hard work and innovation have given Renfrewshire a programme to be proud of.”

The programme attracts up to 20,000 young people a year and – working with police and council wardens – has helped reduce youth disorder by up to 40% in areas where it operates.

It also operates a Kick and Collect programme, where youngsters who take part in community clean-ups are rewarded with prizes such as tickets to sporting events.

The current Street Stuff timetable can viewed online at www.activerenfrewshire.co.uk

The Scottish Communities League Cup has been on a nationwide tour, visiting community initiatives and promoting the three values of the cup: respect responsibility and tolerance to football fans and families across Scotland.