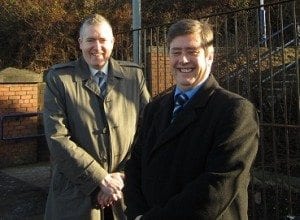 Timetable changes to trains from Glasgow to Ayr, passing through Paisley have been looked at again by the Transport Minister after George Adam intervened. Enhanced services introduced by Transport Scotland to improve the number of passengers moving between Glasgow and Ayrshire meant some trains would no longer stop at Paisley Gilmour Street. After talking to Keith Brown, the Transport Minister, George pointed out that Paisley, Scotland’s biggest town would miss out after these changes. This week George received assurances that services will be reintroduced before May of next year.

Speaking on the news, George said: This is good news for Paisley. From May this year the weekend services that were changed will revert back to stopping at Gilmour Street and the Minister has reassured me that Transport Scotland is working right now with First ScotRail to solve this issue.‘It would seem that some of the administrators involved in this decision just took their eye off the ball. No way should Paisley have been removed from the list of stops. I must say when I talked to the Transport Minister he understood straight away and worked with Transport Scotland and First ScotRail to explain to them the error of their ways.

‘I have now been assured that the enhanced services will be in place before May next year across the board. Working constructively with others always seems to me to be a better way to work that belligerent shouting from the sidelines.‘I will be keeping up to date with future developments and will make sure every Buddie is kept informed.’