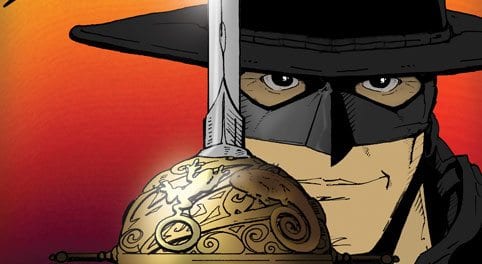 Brought to you by Glasgow-based company Visible Fictions, The Mark of Zorro is a swash buckling theatre performance for children aged 8+, taking place at Paisley Arts Centre on Thurs 4 April at 1.30pm. Incorporating clever sets and prop design, plenty of fancy footwork and a trio of very talented actors; The Mark of Zorro has been devised to teach young audiences all about justice and heroism. Written by Davey Anderson, the play is based on the 1919 story ‘The Curse of Capistrano’, which later became known under the masked superhero ‘Zorro’ name thanks to countless film and TV adaptations. In this interpretation, young theatregoers should watch out for the tell-tale flurry of a cape, the glint of a sword and Z’s scratched in to the ground – all sure signals that a thrilling escapade is about to begin!

The Mark of Zorro will arrive at Paisley Arts Centre fresh from a tour of theatres in New York, and is sure to go down just as well with audiences here as it did Stateside.