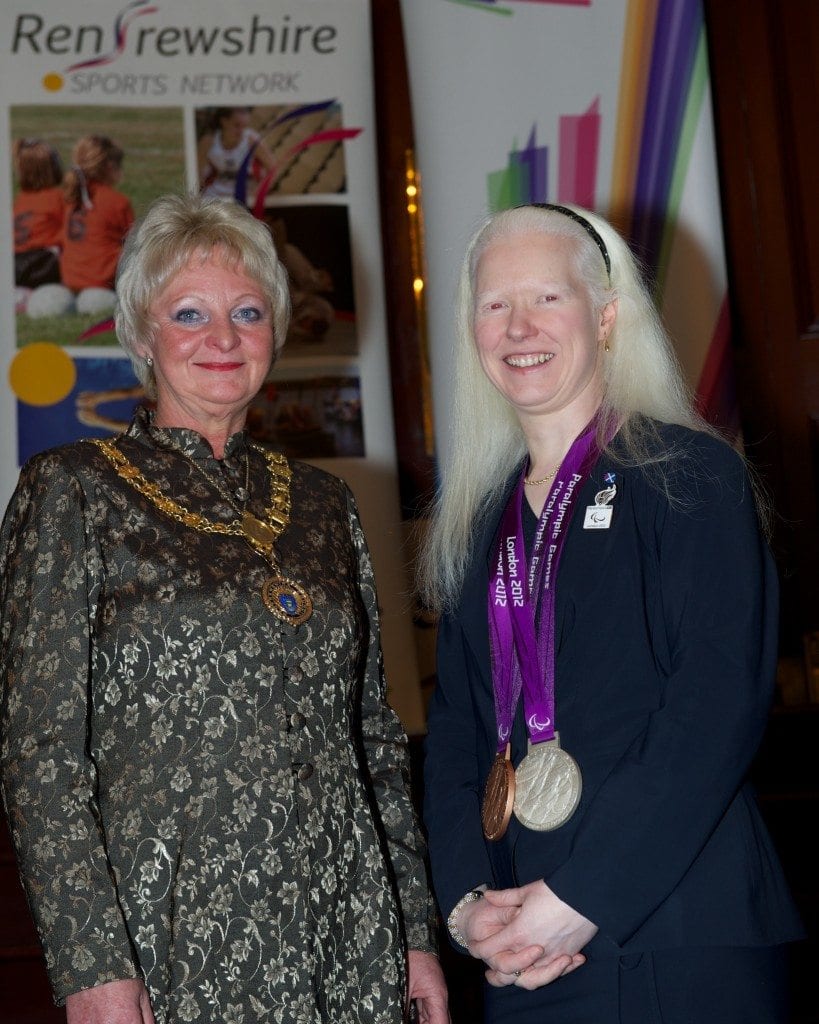 Provost teams up with Paralympian Aileen

Provost Anne Hall was at the Renfrewshire Sports Network Awards in Paisley Town Hall where she gave a speech in honour of Aileen. The Paisley-born cyclist – who was given an OBE in 2009 – is partially-sighted but rides in tandem with a fully-sighted pilot.

She picked up a silver medal in the summer to add to the three gold and one silver won at the Athens and Beijing Paralympics.

Provost Hall gave a short speech congratulating Aileen, who used to train with the Johnstone Wheelers club, while also praising her fellow Renfrewshire-connected Olympians and Paralympians

They are Emily Maguire, of Paisley, who won bronze in London as part of Team GB’s ladies’ hockey team, and 16-year-old Paralympic swimmer Andrew Mullen, who started out at the local REN96 club, and who qualified for three finals in the pool.

Provost Hall said: “The achievements of our Olympians and Paralympians this summer were so inspiring to watch.

“It was great to meet Aileen in person to hear her talk about her fantastic list of achievements over the years.

“There was a lot of talk during this summer of sport about legacy, and that’s what organisations like Renfrewshire Sports Network are there to build.

“The ultimate success of the London Olympics and Paralympics will be judged on how many of our young people are taking part in sport and living healthy lives.”

Aileen, 39, handed out awards to local sportspeople as the guest of honour at the town hall event.

Renfrewshire Sports Network offers representation and support to a range of sports clubs. A total of £5,800 was given out on the night to help aid local competitors.

John Rodger, chair of Renfrewshire Sports Network, said: “It was the first time we have held an event like this, but the Provost wanted to do something to help us mark the Olympic year and the achievements of our sporting champions.

“It was a great night and was really successful. We plan to do a lower-key version again next year.”