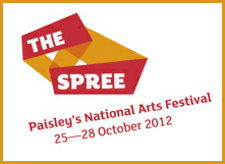 A show by one of Scotland’s top musicians is attracting international interest to a new Paisley festival.

And such has been the interest in the performance by Roddy Frame that ticket buyers from Houston, Renfrewshire, to Houston, Texas, have made the show a sell-out.

The show, in Paisley Abbey on October 27, will be one of the highlights of The Spree, Paisley’s national festival, which takes place from 25-28 October.

Organisers of the inaugural festival, which also features a range of music and comedy acts, are delighted at the response to the Roddy Frame performance which has also attracted gig-goers from Germany and Japan, as well as across the UK and Ireland.

“It’s brilliant to be part of this new festival and to learn that so many fans are willing to travel so far to see the show,” said Roddy Frame.  “I’m also looking forward to performing in a working abbey – that will be a first!”

Lisa Whytock, who is programming the Spree, said:  “We are really excited to see that news of The Spree has spread so quickly across the world.”

The concert goers from Houston in Scotland and Houston in the USA are both long-standing Roddy Frame fans.

Scott MacKay from Houston, Renfrewshire, said: “I was delighted to learn of The Spree festival in Paisley as I have travelled to gigs and festivals all over the UK and it is brilliant to see this level of talent on my doorstep.

“I have also seen Roddy Frame on three previous occasions and it is great that he is coming to see me this time rather than me travelling far to see him.”

“Since my first chance to see Roddy perform live (in London, 2002) I’ve tried to attend as many shows as I can. For me The Spree is worth a trip ‘across the pond’ to enjoy the energy, passion, and genius he delivers when performing live.

“This will be my fifth trip to the UK, and eighth live show to see Roddy.

“I saw his concert in Glasgow at the Old Fruit Market in 2006 and have wanted to return to Glasgow since then.  Another reason for making the trip is that my birthday falls on 28 October, so for me this all too rare live show from Roddy is like a birthday gift.”

The four venues to host the events include a specially erected Spiegeltent at County Square, Paisley Abbey, Wynd Centre and Paisley Arts Centre. Roddy Frame’s concert will be held in Paisley Abbey.

Tickets are now on sale for the festival and can be bought through Ticket Scotland and Renfrewshire Council’s box office-  www.tickets-scotland.com / www.renfrewshire.gov.uk/thespree.

Advertise on paisley.org.uk
Scroll to top