Renfrewshire councillors have formally congratulated Kilbarchan Pipe Band for their incredible run of success – bringing home three of the most prestigious titles in world piping so far this year.

At their recent meeting, councillors unanimously agreed a cross-party motion praising the band – who have won their grade in all three of the ‘major’ championships contested this summer. 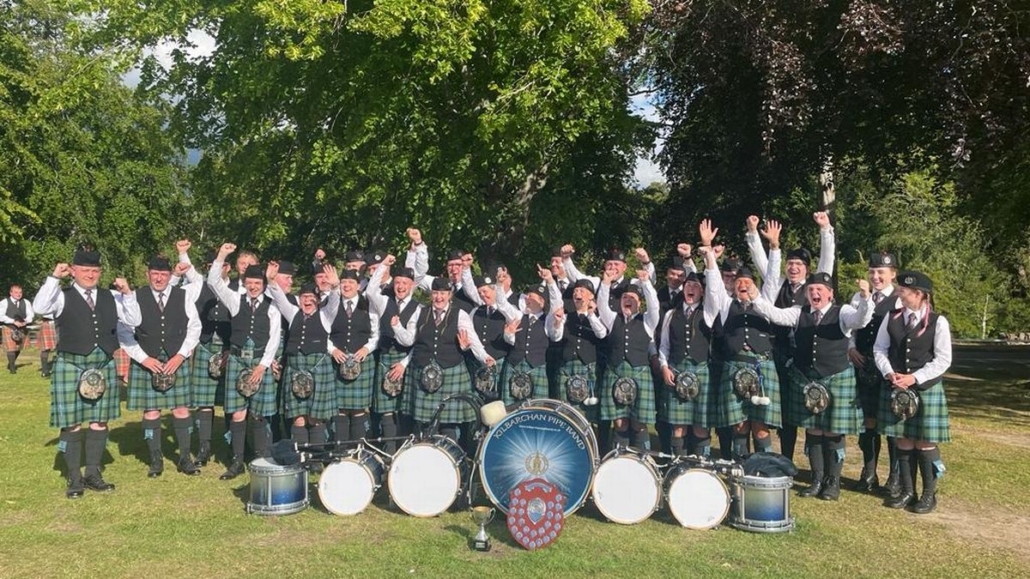 The pipe band’s run started in May when they won the Grade 4B title at the British Championships in Greenock, the first major championship to be held since 2019.

And the silverware continued when they added the UK title in Lurgan, Northern Ireland, in June, and then the European title in Inverness two weeks ago.

Independent councillor Andy Doig – whose ward covers Kilbarchan – proposed the initial motion, and members of the SNP, Labour and Conservative groups all spoke in favour before it was agreed.

The full text of the final approved motion was as follows:

Council sends its heartfelt congratulations to Kilbarchan Pipe Band for winning the Grade 4B Category in the recent British, UK and European Pipe Band Championships, their first major championship wins since the Band reformed just over twenty years ago.

Council further wishes them every success at the World Pipe Band Championships later this year. Council recognises the local renaissance in recent years in traditional Scottish music, culture, and the arts, across Renfrewshire, and looks forward to this trend developing following the return of the National Mod to Paisley in 2023.

The Kilbarchan Pipe Band’s next appearance will be closer to home – when they take to the field at the first-ever Renfrew Pipe Band Championships in Robertson Park, on Saturday 23 June.

The free event is organised as part of Renfrewshire Council’s major events programme and will include a day of family entertainment, with food village and farmers’ market. More event info can be found at www.renfrewshire.gov.uk

Renfrewshire’s Provost Lorraine Cameron, who chaired the council meeting, said: “For a village pipe band to have won three of the biggest competitions in world piping in the same year is an amazing achievement, and one which really puts Kilbarchan on the map.

“I am delighted my fellow elected members were in agreement with Cllr Doig’s motion to formally recognise the band’s dedication and achievement, and to wish them all the best at the World Championships in Glasgow later this summer.”

The local area is no stranger to pipe band success, with both the Renfrewshire Schools Pipe Band and the Johnstone Pipe Band having won at major championships in recent years.

The British Pipe Band Championships were also hosted at St James Playing Fields in Paisley from 2016 to 2019.