DROPS of CBD oil are being used to supercharge a newly-launched health drink. 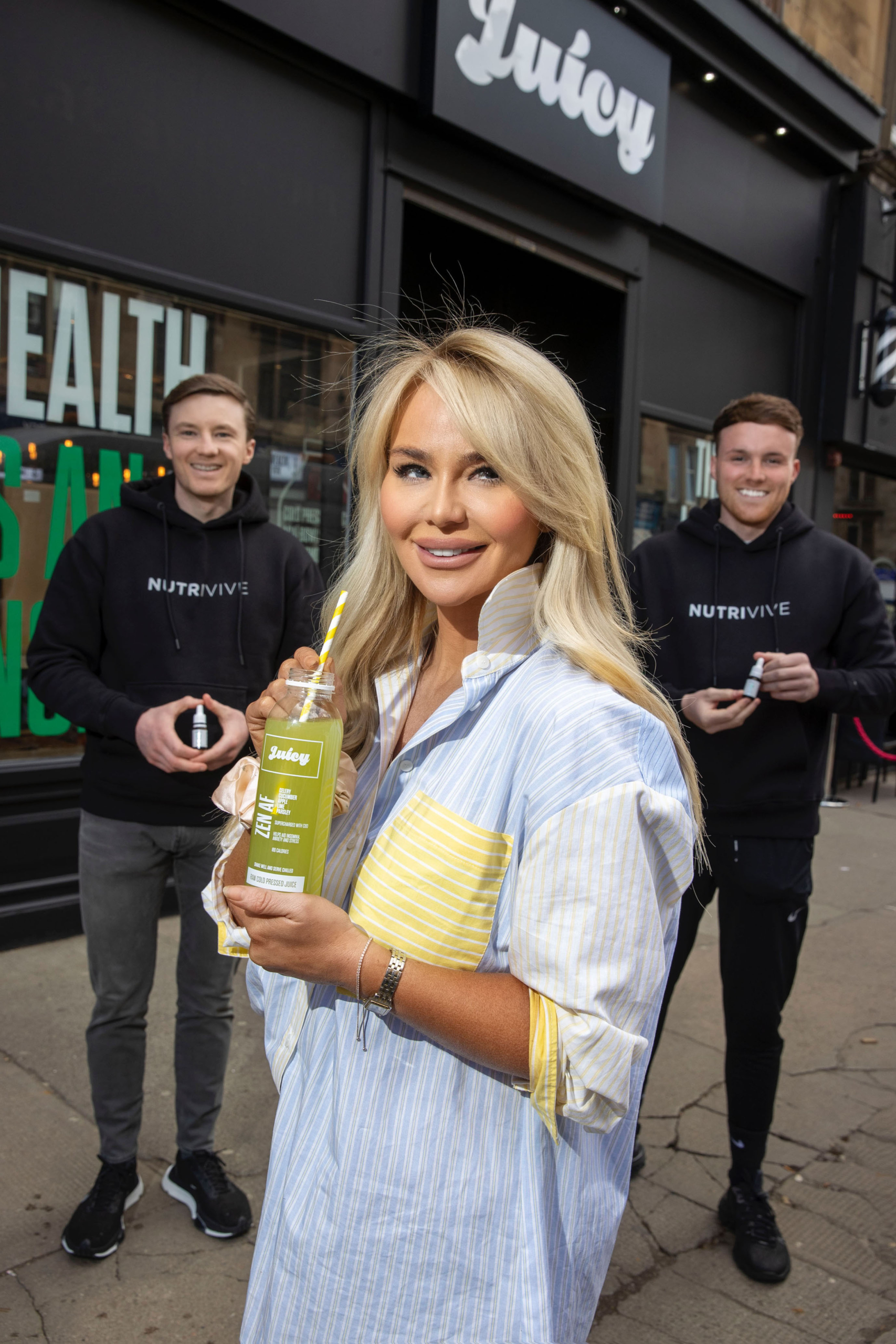 Bottles of the raw juice range are currently available to order online, but now Fallon – the entrepreneur behind the hugely successful Blow Salons throughout Glasgow – is set to open her first Juicy store in Byres Road, in the west end of the city.

In recent years, many people have been turning to CBD oil to help them relax and deal with anxiety, get a deep, restful sleep and find relief from inflammation and pain.

The Nutrivive premium CBD oil contains cannabidiol, which is the part of the cannabis plant with pain relieving, calming and healing properties. It is legal, safe and non-addictive, as it doesn’t contain the THC compound that gives the ‘high’ associated with smoking cannabis.

As well as Nutrivive CBD oil – which is triple-tested for quality of content in one of Europe’s top laboratories – the Zen AF health juice contains cold-pressed celery, cucumber, apple, lime and parsley.

Paisley-based Nutrivive co-owner, Harry McDonough said: “Usually people buy our CBD oil in bottles and take it by putting drops under their tongue.

“Although taking CBD infused in a health juice may appear to be a rather unusual way of taking the oil, it certainly works. 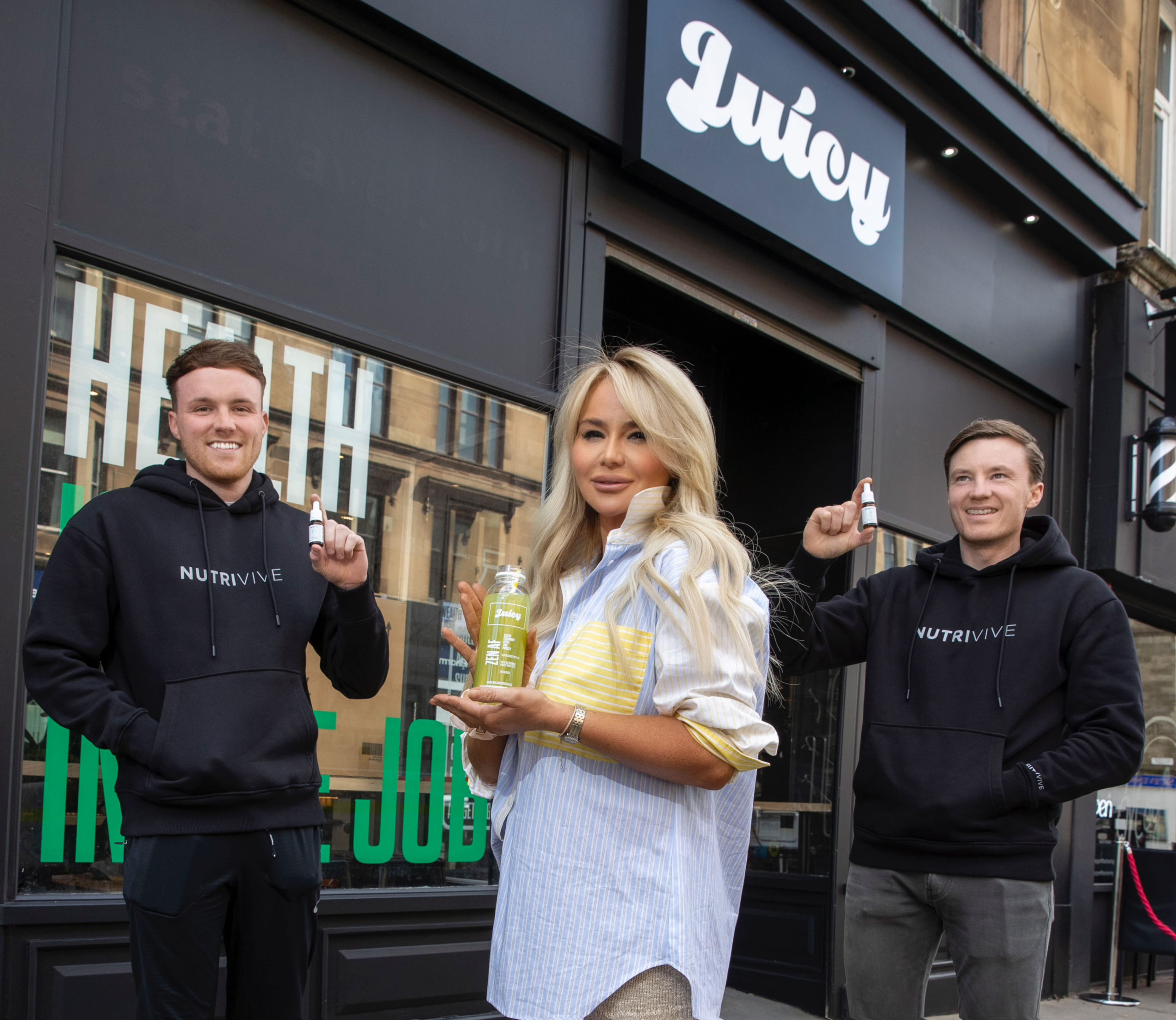 “The Zen AF juice is very tasty and people are also reaping the benefits to their well-being with all the other healthy ingredients in the juice.”

Fallon explains: “We wanted to do something to supercharge our Zen AF juice and we found the best way to do that was to infuse the drink with the Nutritive CBD oil.

“We choose Nutrivive because we were happy with the quality of their oil, which provides many benefits to people’s well-being.

“Having CBD in our drink is a very safe, accessible and fun way of getting the oil into your system as part of a daily wellness regime.

“Our Zen AF juice helps people sleep better and also aids dealing with anxiety and stress, which in turn, gives people more energy and increases their concentration. We’re sure it’s going to be really popular.”

Some of the best-known celebrities who are said to use CBD oil include Kim Kardashian, Whoopi Goldberg, Jennifer Aniston, Gwyneth Paltrow, Mike Tyson, Morgan Freeman and Tom Hanks. Even David Beckham has invested in a company using CBD in its products.

Go to www.nutrivive.co.uk for more information on their CBD oil and its health benefits.

And visit www.imgettingjuicy.com for details of the Juicy range of health drinks and foods.

MUM Kelly Tweedle has told how drops of cannabis oil from a company started by two Paisley brothers has changed her life after suffering years of excruciating pain.

Her agonising ordeal began during her second pregnancy when she developed SPD – symphysis pubis dysfunction – a condition that causes a debilitating pain in the hips, back and upper legs.

It was so bad, Kelly, 37,  spent six months of her pregnancy having to use crutches to get around.

Although for many women the condition improves and disappears after giving birth, Kelly continued to suffer the chronic pain SPD brings for nine years after her son, Alfie was born.

Kelly also has a daughter, Ava, aged 12, but she went through so much pain, it even stopped her having the third child she wanted, as she couldn’t bear the agony of severe SPD during pregnancy again.

Neither over-the-counter painkillers, nor stronger tablets that were prescribed by her doctor managed to control Kelly’s pain.

But that that all changed last summer when she started taking half-a-dozen drops of Nutrivive CBD oil under her tongue every day.

Kelly is now free from the pain and has almost completed a training programme that takes her from the couch to running a distance of 5k. She now even wants to take part in a fun run to raise money for charity. 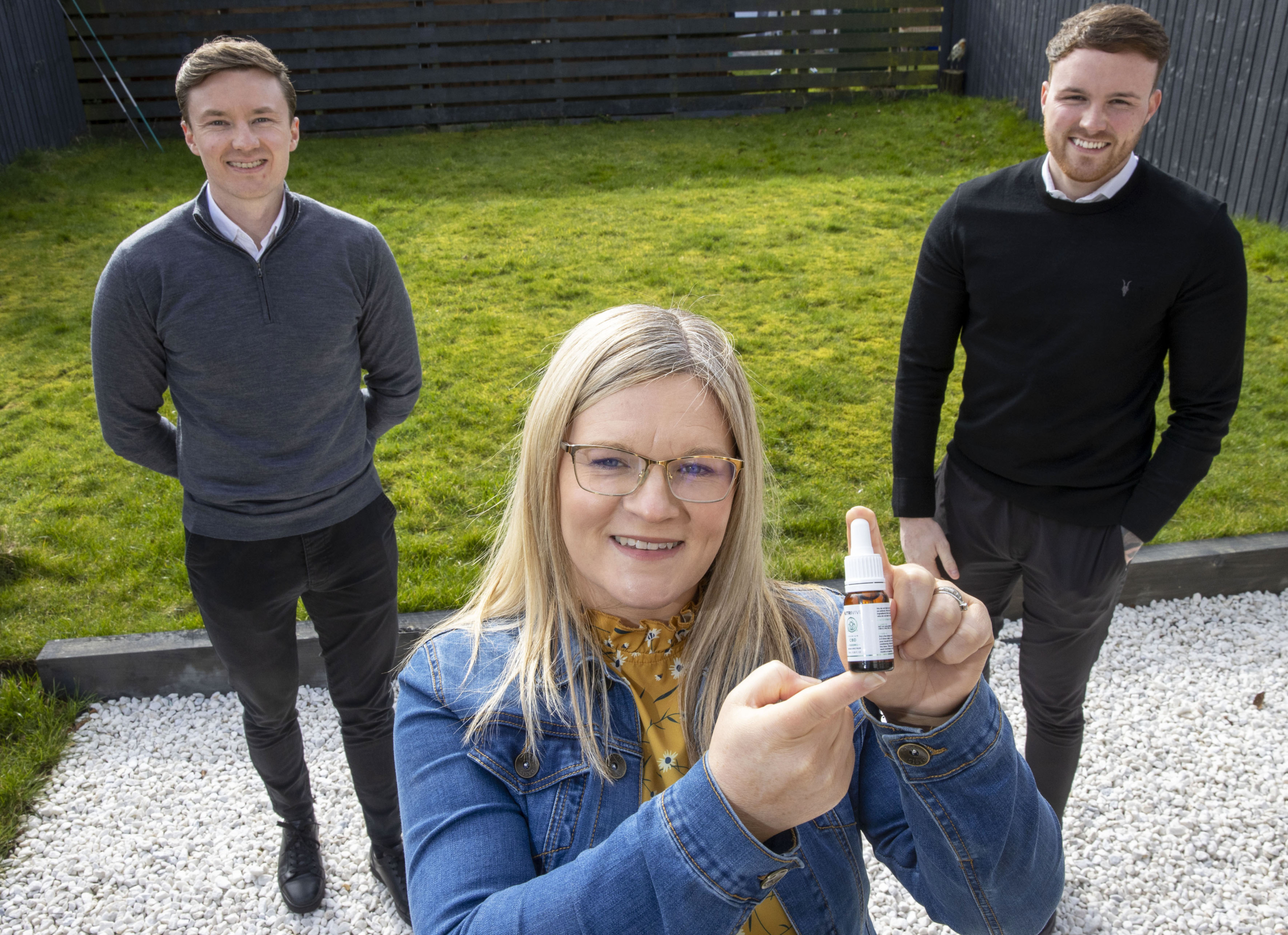 Nutrivive is a Paisley-based company – launched last year by brothers, John and Harry McDonough – and their premium CBD oil contains cannabidiol, which is the part of the cannabis plant with pain relieving, calming and healing properties.

The oil is legal, safe and non-addictive, as it doesn’t contain the THC compound that gives the ‘high’ associated with smoking cannabis, or taking the drug in other forms.  Medical cannabis was legalised in the UK in November 2018.

Every batch of Nutrivive CBD oil is triple-tested for quality of content in one of Europe’s top testing facilities.

Some of the best-known celebrities who are said to use CBD oil include Kim Kardashian, Whoopi Goldberg, Jennifer Aniston, Gwyneth Paltrow, Mike Tyson, Morgan Freeman and Tom Hanks. Even David Beckham has invested in a company using CBD in its products.

Kelly, a former midwife explains how the crippling pain from the SPD affected her and how Nutrivive CBD oil has had an amazing effect on her life:

“SPD is a condition that is very under-recognised for the amount of pain it can cause.

“I was on crutches after being six months pregnant with Alfie. The pain in my hips was unbelievable. At first I wore a belt during the day to help with the pain, but it got so bad I had no option but to get about on crutches.

“My legs wouldn’t move like I wanted them to and it would take me ages to do something simple and straightforward as get out of bed.

“I would have had another child if it wasn’t for the pain I suffered during my second pregnancy. It’s a horrible pain and I wouldn’t wish it on anyone. I now wish Nutrivive was around after I gave birth to Alfie.”

Kelly continued: “Even after Alfie was born, the pain never really went away and sometimes it would be just about bearable and I would put up with it. But whenever I’d take part in any physical activity it would flare up again and would last for weeks at a time.

“I’d sign up for a fitness class then have to stop going because the pain would come back with a vengeance. It got to the point where I would hold back from doing anything physically exerting.

“I had physiotherapy, but that didn’t cure the problem. I resigned myself that I wasn’t going to be cured of the pain and tried to accept that I had a dodgy hip.”

Kelly, from Penilee found out about Nutrivive through a relative who used their CBD oil. 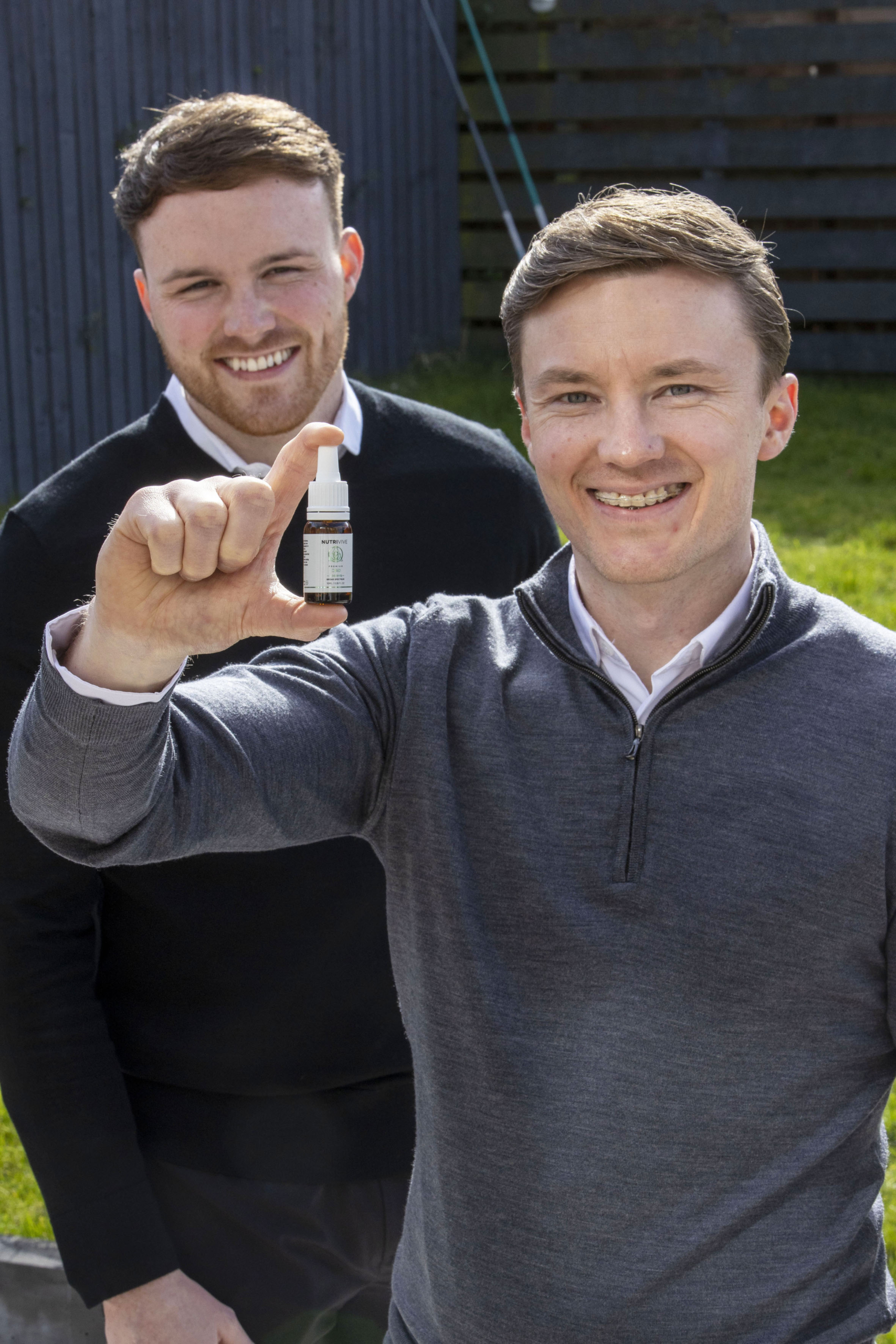 She said: “I did some research and was quite impressed, so I thought I would give it a go.

“After a couple of weeks putting half a dozen drops of Nutrivive CBD oil under my tongue, I noticed I wasn’t suffering as much pain in my hips. And by the time I’d finished my first bottle there was a massive difference and I couldn’t wait to order another bottle.

“I realised it was definitely the Nutrivive CBD that was making me pain-free because I went for a few weeks without taking the oil and my hip pain came back. As soon as I started taking the Nutrivive again, the pain disappeared. That really brought it home to me that the oil was working.”

In May last year, Kelly decided to go on the Couch to 5k Training Plan, but had to give up after a few weeks because the pain in her hips was so bad.

The following month, Kelly started taking Nutrivive CBD oil and now she has started on the training programme again and has almost completed the nine-week sessions pain free.

“I’ve got zero pain and it has given me huge encouragement and I’ve got more confident. It feels great now that I’ve got so far with the training without having to give up.

“I’d now quite like to do a fun run for charity, but before I started using the Nutrivive CBD there’s no way I would be able to do that.

“It’s massively changed my life and I wouldn’t be able to do the things many people take for granted if it wasn’t for the CBD oil.”

Nutrivive co-owner, Harry McDonough expects his company will be one of the first to be accredited by the Food Standards Agency who are bringing in new rules later this year to ensure quality standards of CBD products.

Harry said: “It’s a fantastic feeling knowing that our CBD oil has made a difference to Kelly and many other people’s lives.

“I use it myself and I know first-hand the benefits it brings to me through relaxation, better sleep quality and how it holistically strengthens your mind, and body.

Go to www.nutrivive.co.uk for more information on CBD oil and its health benefits.