Practical rocket experiments that led to the formation of the esteemed Paisley Rocketeers’ Society (PRS) were begun in November 1935.  They had been inspired by rocket airmail flights in England and the Western Isles by the German rocketeer Gerhard Zucher, spaceship exploits in American science fiction magazines, and rocketry discussions within the British Interplanetary Society.

It was during a bout of ‘flu that John Neilson schoolboy John D. Stewart spent the weary hours reading pulp-fiction space adventure magazines from the USA, and thought that perhaps some work could be done towards changing fiction into fact. John had recently joined the British Interplanetary Society, and had been thinking about rocket propulsion for space travel. ‘Armed’ with a year-round availability of fireworks from a ‘Jenny a’ things’ shop on Caledonia Street, (an odd choice of merchandise from Annie Howatt’s shop), John, his brother Peter, and some friends, founded the Paisley Rocketeer’s Society, embarking on a programme of Research Rockets.

That name for their rockets wasn’t chosen casually.  It indicated serious intent to do useful work, albeit with limited funds and resources, and finding out almost everything about rocket fundamentals themselves.

The aim of the Paisley society (officially founded on the 25th February 1936 upon the launch of their ninth rocket) was “to arouse public interest in the possibilities of rocket and space flight, also to carry out practical experiments.” Here is a 1935 photo of the PRS with John Stewart at the rear.

The PRS Research Rocket (RR) series were very innovative and superbly crafted rockets powered by cannibalised firework rocket motors, which were flown in and around Paisley: initially on and around Oakshaw Hill. They carried out practical research into rocket propulsion, rocket vehicle design, and aerodynamics.

John devised an ingenious method to deploy a parachute on his first rocket RR-1. RR-1 had a piece of wire bent into a loop and attached to a small button. The nose cone was in two halves held together by the wire loop, with the button inside. When the thrust burned out the heavy button kept moving forwards whilst aerodynamic drag slowed the rest of the vehicle, the button pushing the wire loop off the nose and allowing the halves to open and release the parachute.

RR-1 – launched on 27th November 1935 – was rather erratic: John fitted seven firework rockets in the rear of a hexagonal cardboard tube with stiff cardboard fins, and lit the seven burning string fuses. Then he ran like billyo when inevitably they all ignited at different times; sending the thing careering round his back garden, pursuing scattering kids! 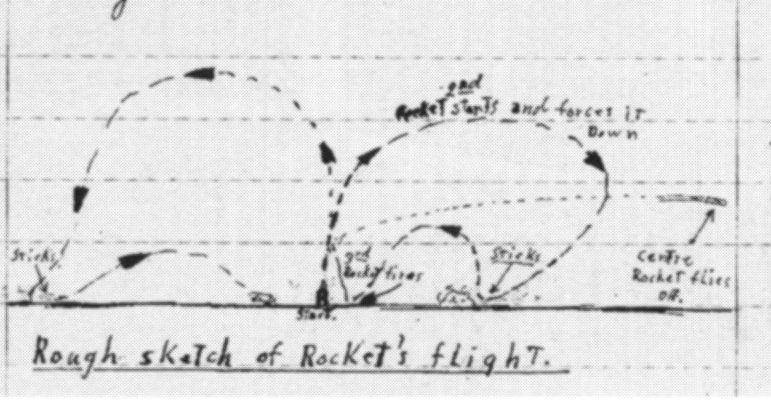 Most youngsters – and to be sure their parents – would have called it quits then and there, but John and his friends were not discouraged by these problems and went on to solve others; they had the tenacity to work through the problems to achieve success with successive rockets.

The rocketeers developed their own airmail service, sending letters to each other’s back gardens in the hollow nosecones of rockets. RR-47, flown on Hogmanay 1937 in St James’ Park Paisley, was, as far as we know, the world’s first successful three stage rocket. All three stages worked, though they didn’t recover the third one as it flew too far. It was a demonstration of the principle of multi-stage rocketry, which is an essential piece of technology used today for reaching orbit. The PRS may also have been the first amateur group to launch a camera carrying rocket, with RR-53 launched near Tarbert Castle on August 1938 as shown here with Elizabeth Stewart. From 1936 to 1939 the PRS carried out practical work on: spin-stabilised rockets, increasing the efficiency of their rocket motors by means of air ducts, motor clustering (multiple motors), and aerial photography. To raise funds for the society, they produced ‘rocket mail’ which they sold to friends and relatives. John developed a very unique style to his block-printing that’s highly prized by philatelists worldwide.

With the outbreak of World War 2, their rocketry ceased as John Stewart was always adamant that rocketry should only be used for peaceful purposes.

During the war, John discovered that the Paisley Rocketeers’ work on air-augmented rockets (wherein the rocket motor acts like the core of a modern bypass turbojet engine) had been independently duplicated by an even earlier pioneering rocketry group in Glasgow who were testing these advanced air-breathing rockets fixed to composite-construction model aircraft airframes, a forerunner of today’s carbon-fibre aircraft.

Thanks to the efforts of philatelist Mrs Margaret Morris who had acquired some of the pre-war rocket mail, and Paisley author Donald Malcolm, John and his brother Peter revived the society in 1966. The PRS continued their experiments and now flew rocket mail to raise funds for charities. 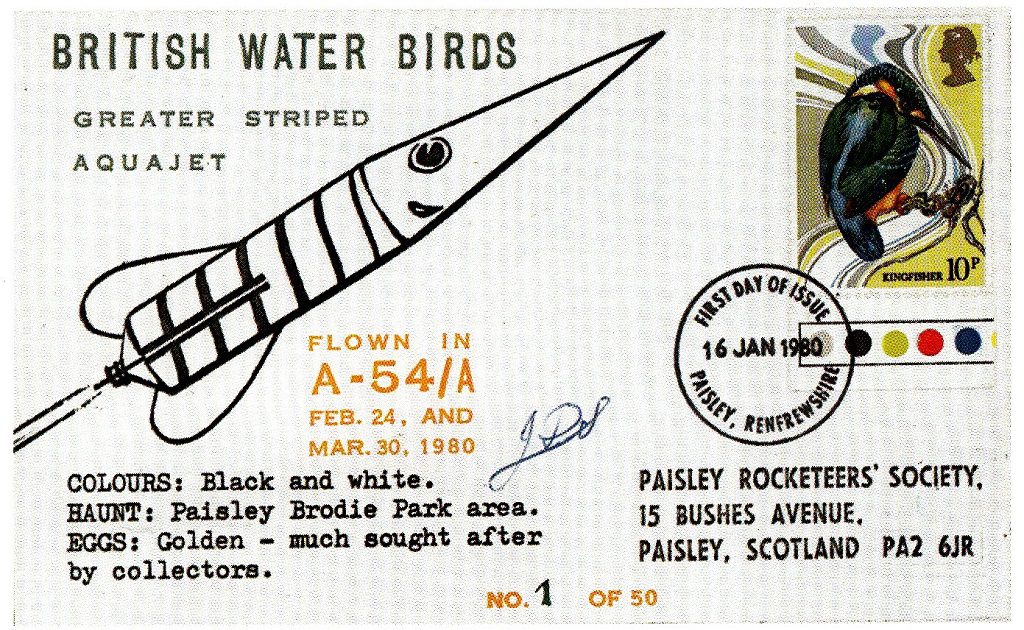 Thanks to a busybody notifying their activities to the Home Office in 1969, the PRS had to stop flying pyrotechnic rockets (officially at least!), but with great ingenuity turned to the development of ‘aquajet’ rockets, propelled by compressed air and water, as an unobjectionable alternative. The authorities still objected!

Shown below is John Stewart with his double-chamber aquajet launched in the mid 1980’s at the site of what is now the Paisley’s University sports ground on the road to Barrhead. In response to the word from officialdom, the PRS also ran a campaign under the ‘Fund for the Freedom to Fly Model Rockets’.

The Home Office Ban on model rocketry, even with factory produced motors, prevailed until 1985, but the PRS ignored it and quietly kept on flying pyrotechnic rockets up the Gleniffer Braes! This photo shows John setting up a rocket launch at Walls Hill south-east of Howwood in 1983.

The society remained active until the death of John Stewart in March 2005, when it was decided to end the society. Glasgow Airport’s immoderate and insatiable demand for ever more controlled airspace now makes rocket flight in and around Paisley impossible. However, rocketry inspired by the Paisley Rocketeers Society continues today in Ayrshire with old and new rocketeers, including some of the former PRS such as John’s brother, Peter Stewart.

With reliable and affordable model rocket motors and kits now available in most good model shops, and higher power motors for more experienced rocketeers also now available through licensed importers and suppliers, what might be termed “popular and public rocketry” is a growing activity in Scotland. Today, the Scottish Aeronautics and Rocketry Association (SARA) rocket club fires small to large rockets at the Fairlie Moor south of Largs in a safe and legal manner. All are welcome to join.

And every August, rocketeers convene from all over the world at the International Rocket Week which is currently sited at the Lapwing Lodge (‘Peesweep’) scout camp south of Paisley. (The launches take place at the Fairlie Moor). At this event, the John Stewart annual trophy is awarded to an innovative or meritorious rocketeer in recognition of the sterling research efforts of the Paisley Rocketeer’s Society.