Opened Saturday twenty-sixth of May 1866

The property was to be sold by public auction but a letter was received by the town council on the night preceding the auction intimating that Sir Thomas Coats had privately purchased the land and would build the impressive fountain gardens.

The opening of the Fountain Gardens was the grandest event one could imagine and coincided with the Queen’s Birthday. There would have been tremendous excitement in the town for days before the grand opening
An illustrated leather-bound book was printed by Thomas Coats to mark this grand occasion.

A copy of which was presented by the Town to Harvard University in Cambridge, Massachusetts, USA.
The book states that; By ten o’clock in the morning the town generally was on the move and well-dressed sightseers were perambulating in every direction.
Trains from Glasgow, Greenock and the West Country, brought numerous visitors. There were bands playing music moving to and fro among the streets. 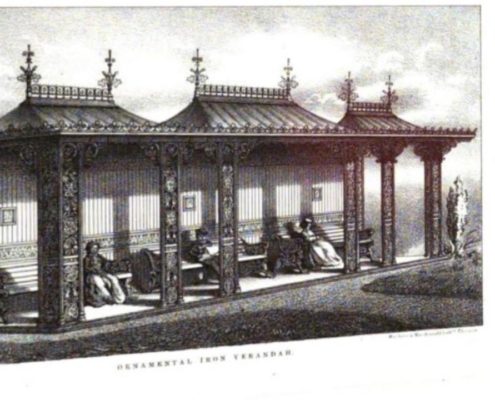 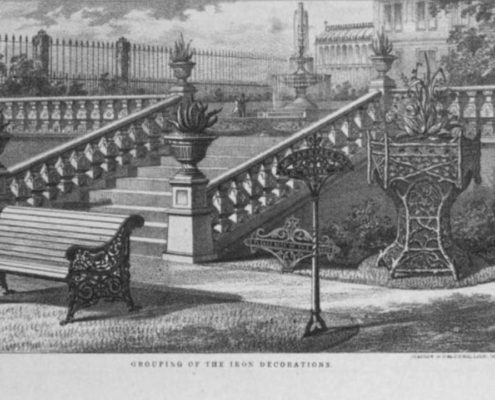 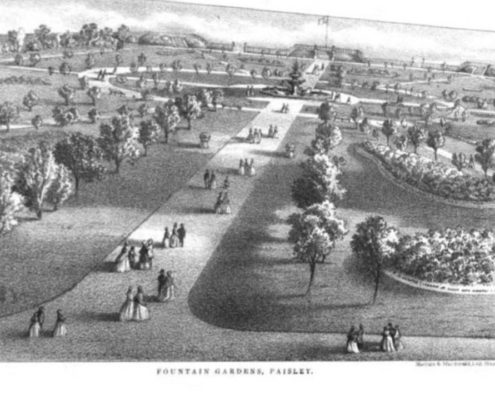 By twelve o’clock County square was packed and the Volunteers under Major Fullerton fired three rounds in celebration of the Queen’s birthday.
Every society and trade were represented all carrying their banners.

The procession with banners waving set off for Love street.
In the gardens, every accommodation was provided for the spectators.

The central mound was reserved for those who were to take part in the ceremonies and gentlemen who had special tickets.
There were large seated galleries draped in red cloth and festooned with gold cord.

Long before the allotted hour, the Gardens were packed with gaily attired women and people in their holiday attire.
At two o’clock the procession lined up at the central mound with the Volunteers in a line.

On the mound were; Sir Thomas Coats, the Provost, the magistrates and Town Council, Sheriff Cowan, Thomas Speir Esq of Blackstoun convenor of the County, H E Ewing MP and all the area dignitaries of Renfrew and Johnstone.

Mr Thomas Coats stepped forward amid much cheering and waving of hats and gave a speech presenting the Fountain Gardens to the people of Paisley. There were several responses to his speech including his brother Sir Peter Coats which culminated in three cheers for Sir Thomas Coats.

At an appropriate moment when Sir Thomas had been speaking the fountain was turned on too much excitement.
The assembled dignitaries adjourned to the George Hotel and walked in procession to the Coffee Room at the Cross to join Sir Thomas Coats in a sumptuous celebration dinner. Everyone of note in the district and without was present.

There were many toasts and speeches and much cheering and waving of handkerchiefs.
NB -A sapling of the famous Wallace Oaktree in Elderslie was planted in the Fountain gardens prior to the grand opening day.