There’s an Accord fundraiser on tonight at The Bungalow. It is sold out and looks to be a good money spinner for the Paisley hospice. On the bill is The Fogarty’s with special guests: Iain Bell , Robert Wishart, Aine Currie, Corran MacArthur and Gill De Groote who are all going to perform for this worthy cause. The Fogarty’s love performing and raising money for Accord Hospice. 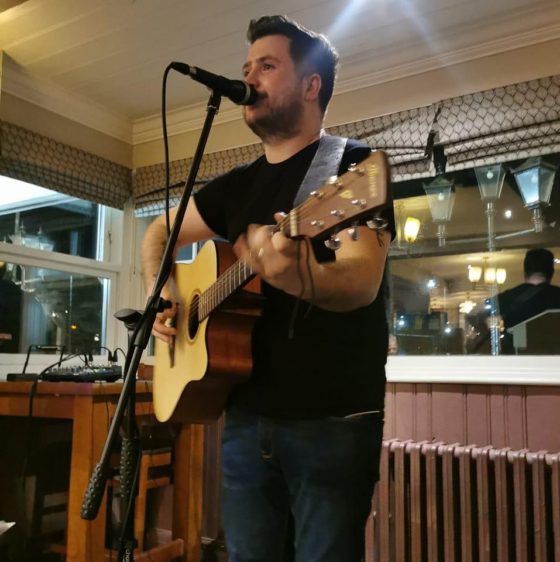 Just last year they did a lockdown performance from their own back garden raising an amazing £4110 on the night through Just Giving. Those that are lucky enough to have a ticket will be entertained with a mix of Americana, Folk, and Pop, a real mix to suit all tastes in music.

The Brass Monkeys are up for some more monkey business tomorrow afternoon. Doors are at 1pm and the band starts at 2pm. This will be a busy gig and you should turn up early to get a seat. Tickets are £ on the door.

The Area Renaissance Team are back tomorrow night. Join original residents Stephen Lee and Jamie Mitchell for a fantastic night of 90s dance music at Paisley’s longest running club night. If one of your favourite haunts a few years ago was Area this is for you. It’s a nostalgic night out and you will probably bump into some old faces as well as have a great time. Tickets on the door are £10 and opens at 7pm.

The regular Sunday Open Stage starts at 3pm and will showcase talent from all over the country. Free entry.

Rocknrollas is having the first of their monthly Northern Soul days. The venue is a fantastic setting for dancing as they have a huge wooden floor, and all the music is played on vinyl by DJs Tommy Clark and Boab Williamson as it should be. The event is free entry.

Martin James is at The Cave tonight from 8pm. Tomorrow’s doubler is Blue Horizon from 6pm followed by Moneypenny at 9pm and to finish off what is a rocking weekend they have Rumours playing from 6pm on Sunday.

The Swan has another cracking week of entertainment for you again starting tonight with Duncan McClellan from 5pm followed by Emma Nailen at 8pm. Tomorrow in the ‘Shopper’s Slot’ from 4pm is The Dead Flowers. The Northern Soul Sunday Session starts at 3pm. Clyde are in their usual slot at 5pm on Monday. Lee James is in twice next week in his residency spots on Tuesday and Thursday at 3pm.

The Keg have Bad Boy Boogie in tonight at 9pm and for this week they have a Wrestlemania viewing party on Saturday and Sunday.

The Anchor have Monkey Business on Sunday from 4.30pm. Stephen Henry is at Tannahill’s tonight from 8pm. Welcome to Northern Soul Dance. Established since 2008, we’re a dance company​

Over the weekend there are two Northern Soul Events. The style of dancing was born out of the all-nighters back in the 70s at famous clubs such as The Wigan Casino and The Twisted Wheel which saw millions of fans from all over the country spending the night twisting away to their favourite Northern Soul tracks. It looks like we have a thriving scene in Paisley and now is the perfect time to get your dancing shoes out.

This week’s Open Mic Sessions are: Dunky Hunter at The Abbey from 9pm, Jason Flood at Gantry from 9pm, Johnny Barr at The Keg on Wednesday from 8.30pm.

Keep Music Live and have a great time.

The power of dance has been harnessed for thousands of years, generations young and old can enjoy the movement whether it’s wandering through the waltz in the arms of your childhood sweetheart to getting down in the groove with your best friends, dance is everywhere. The dance is within you.

​Whether you enjoy dance as a social activity, are just getting started as a new hobby or you’re a fully-fledged professional, there’s always more moves to learn and enjoy.

Glasgow News? Daily Updates part of our network
Excitement as multicultural pen pals meet each other for the first time