AS THE UK PREPARES TO HOST THE COP26 CLIMATE SUMMIT, BRITISH AIRWAYS AND ITS PARTNERS ACHIEVE RECORD CARBON EMISSIONS’ REDUCTIONS AS PART OF THEIR ‘PERFECT FLIGHT’ DEMONSTRATION TO SHOW HOW AVIATION IS DECARBONISING 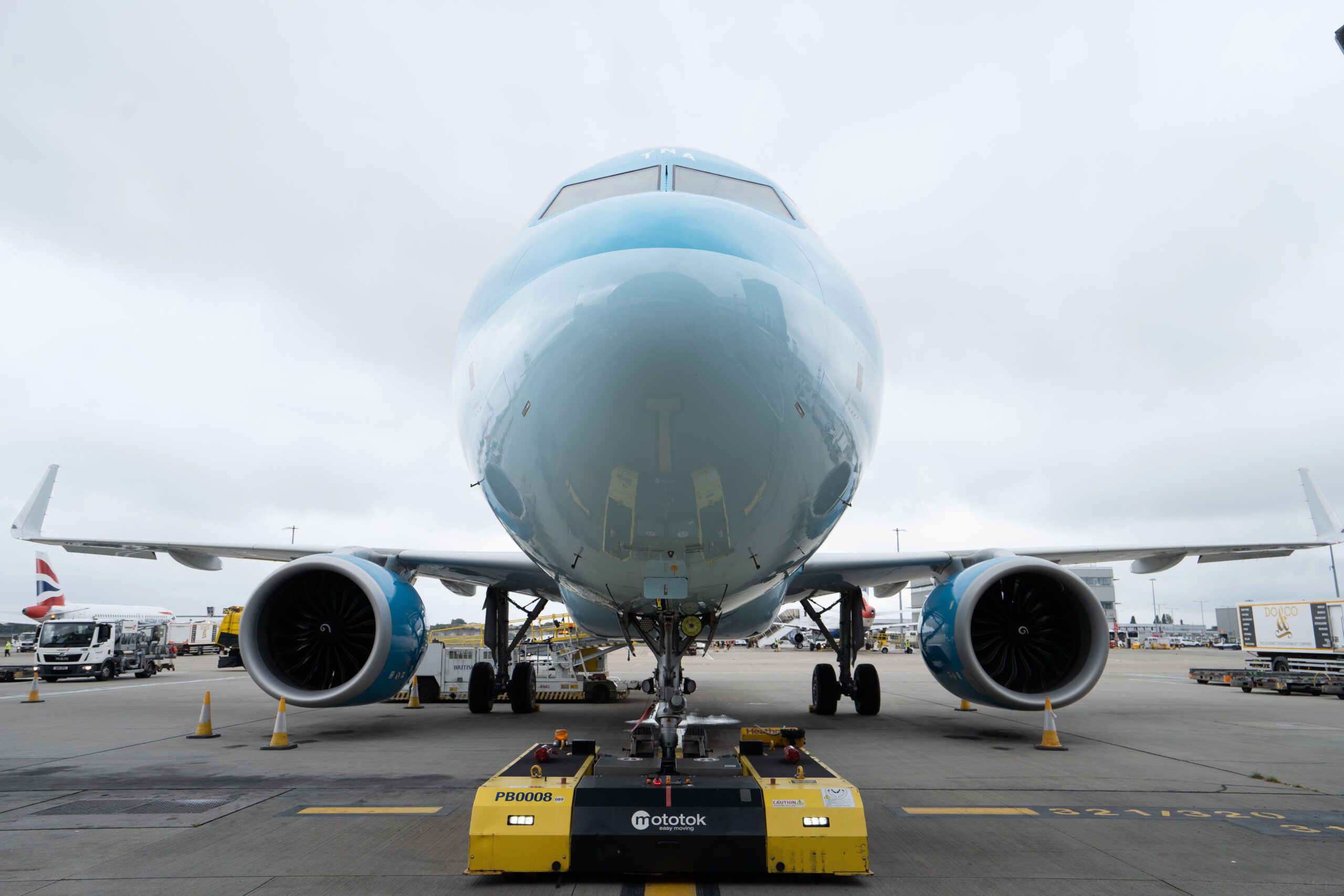 September 15, 2021 – The British Airways BA1476 from London Heathrow to Glasgow Airport became the airline’s first ever passenger flight to be powered directly by sustainable aviation fuel (SAF), with the remaining emissions produced by the flight offset. The airline teamed up with Heathrow, air traffic service provider NATS, fuel giant bp, Glasgow Airport and Airbus to operate the short carbon neutral flight, which departed Heathrow at 10.36 on Tuesday 14 September 2021 and arrived in Glasgow at 11.28 local time.

The short journey on the airline’s new special liveried sustainability aircraft painted in partnership with Airbus replicated a flight British Airways operated to Edinburgh in 2010. At the time, neither offsetting nor sustainable aviation fuel were available to reduce the flight’s impact on the environment, and the journey was operated on an older aircraft carrying fewer passengers.

The aim of this week’s flight was to show how far the aviation industry has progressed in its efforts to decarbonise over the last decade. 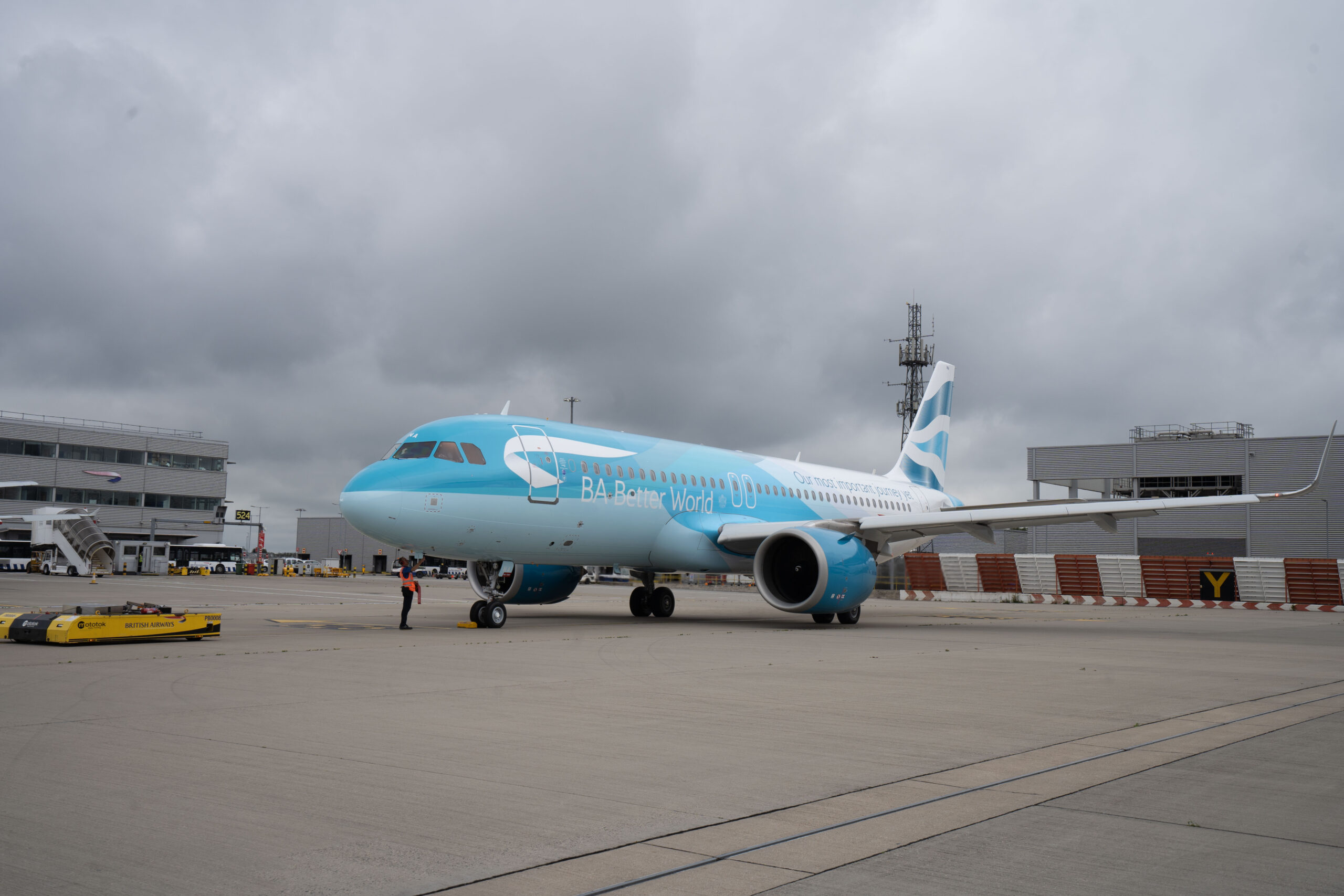 The flight was operated by an Airbus A320neo, the quietest and most fuel-efficient short-haul aircraft currently in British Airways’ fleet. Thanks to advances in engines, aerodynamics, cabin and flight operations, A320neos burn 20% less fuel, which means 20% less CO2, and are 50% quieter compared to its predecessor which operated the flight in 2010.

Since then, British Airways has made changes including installing newer, lighter seats on the new aircraft, lighter catering trollies and has replaced heavy flight manuals and inflight magazines with digital downloads, all helping to reduce the weight of the aircraft, contributing to lower fuel use and lower emissions.

The flight was directly powered by sustainable aviation fuel, provided by bp, blended at 35% with traditional jet fuel in accordance with technical aviation specifications. * 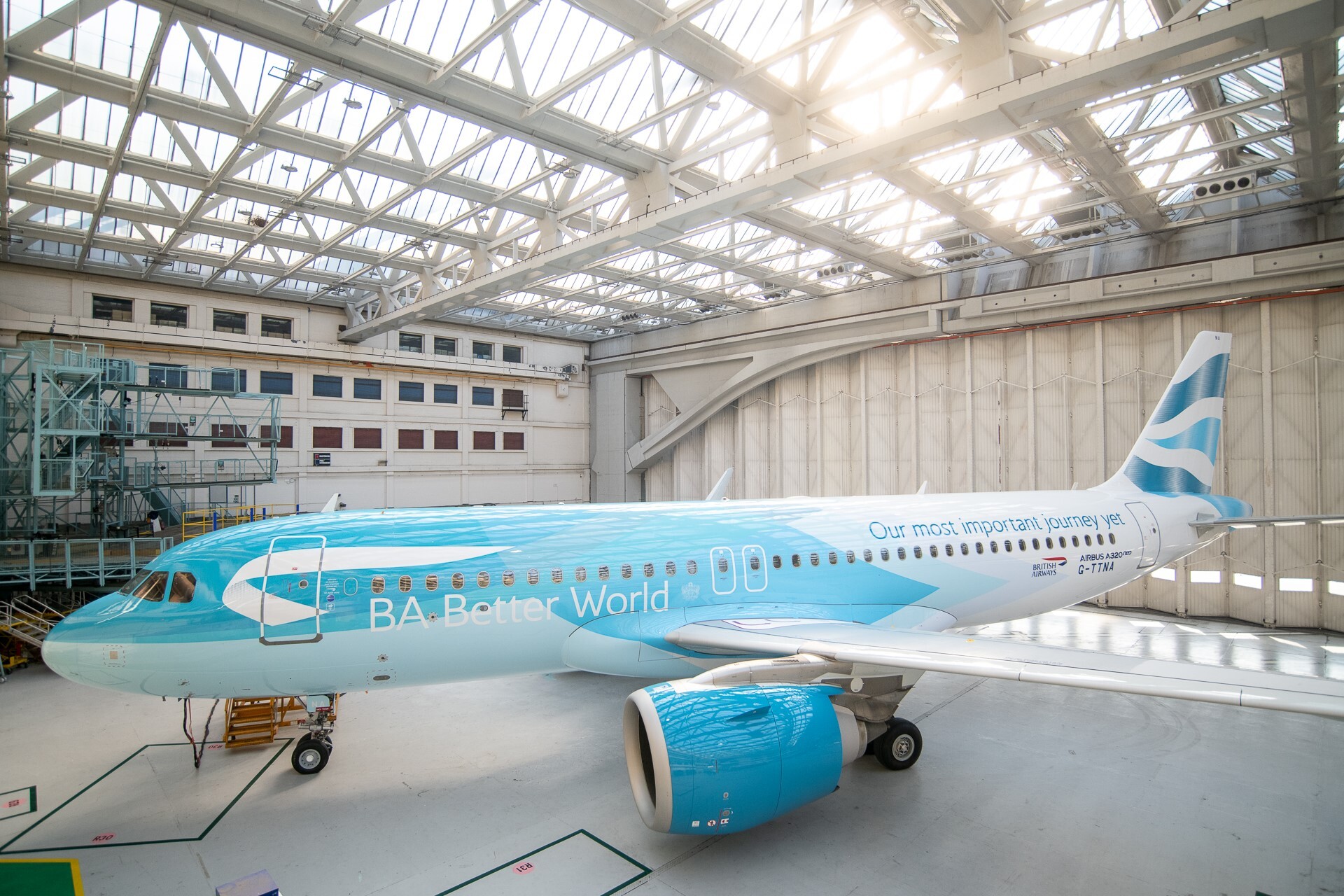 The aircraft was pushed back using one of the airline’s electric Mototok vehicles, powered by Heathrow’s supply of 100% renewable electricity. Just one of the aircraft’s engines was used to taxi to the runway, almost halving the power used to start its journey.

Air traffic controllers at NATS directed the aircraft on its continuous climb from Heathrow and descent into Glasgow, avoiding any levelling off, which causes an increase in fuel burn. The most direct routing was provided by NATS as well as the most optimal flight level and the aircraft was able to land without airborne holding; techniques that successfully saved fuel and reduced emissions.

Climb speeds were programmed in advance and aircraft computer systems worked out the optimum altitude and used accurate weight and wind data to ensure the most efficient journey possible.

On landing, the second engine was switched off to halve the power used and carbon emitted as it taxiied to stand.

This year’s flight achieved a 62% CO2 emissions reduction compared with the flight in 2010 – 34% from more efficient aircraft and operations, 28% from the use of sustainable aviation fuel, made from recycled waste cooking oil and with the remaining 38% offset using high quality, verified carbon offsets. 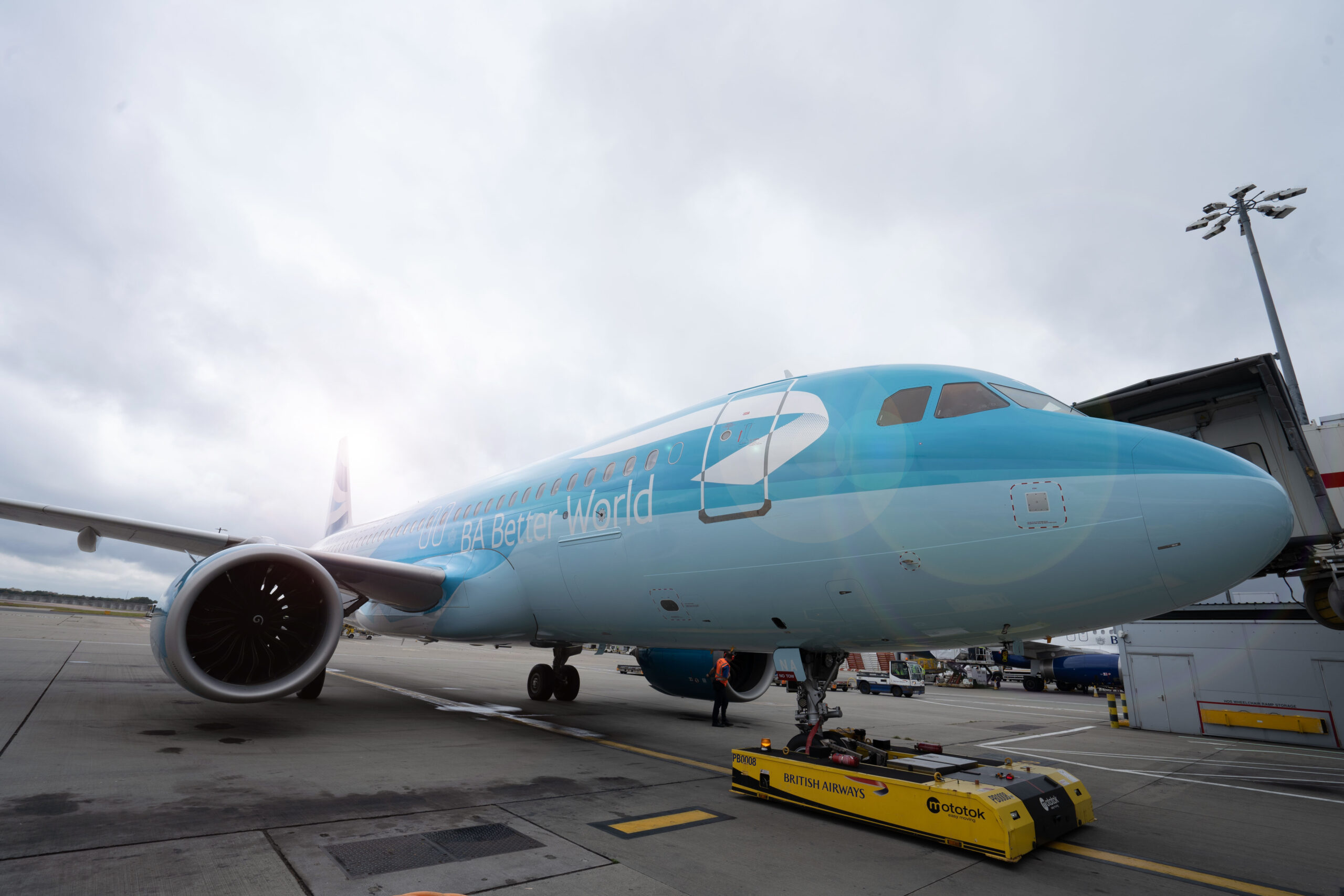 British Airways’ Chairman and CEO Sean Doyle described the flight as a glimpse of the future:

“This flight offered a practical demonstration of the progress we’re making in our carbon reduction journey. By working together with our industry partners we’ve delivered a 62% improvement in emissions reductions compared to a decade ago. This marks real progress in our efforts to decarbonise and shows our determination to continue innovating, working with Governments and industry and accelerating the adoption of new low carbon solutions to get us closer still to the Perfect Flight of the future.

“With BA Better World, we’re making progress on our journey to a sustainable future and have adopted a range of short, medium and long-term initiatives to get us to net zero emissions. Together, we can build a future for aviation that delivers the wonders of air travel while reducing the impact on the environment.”

“Live demonstrations like this show just what is possible and are an important step on the aviation industry’s path to net zero by 2050. We can learn a lot from flights like these, as they help us understand how to redesign the airspace over the UK and play our part in making flying sustainable for the future.”

“The A320neo is a great example of how far our industry has come.  It meets all the ICAO environmental standards thanks to advances in engines, aerodynamics, cabin and flight operations. The A320neo burns 20% less fuel, which means less C02, compared to its predecessor and is 50% quieter.

“Together with our industry partners, we want to bring the first zero emission commercial aircraft to the market by 2035. Perfect Flight is a clear example of how together we can achieve impressive results.”

“The Perfect Flight shows that the solutions to deliver net zero flight exist, we just need to scale them up. The faster we scale up supply and use of sustainable aviation fuels, the faster we can decarbonise aviation and protect the benefits of flying in a world without carbon. What is needed urgently is for Government to introduce policies to increase the supply of SAF and to provide the right price incentives for airlines to use it.”

“We are honoured to join forces with British Airways on this important initiative. At bp we are focusing on working with hard-to-abate sectors, such as aviation, as part of our ambition to be net zero by 2050 or sooner and to help the world get there too. By working collaboratively with industries, we can help to accelerate decarbonisation and we believe SAF will be one of the key solutions to fulfil this for the aviation sector.”

“This flight demonstrates the progress the industry has made during the last decade and how we can work collectively to decarbonise aviation. As one of the UK’s largest airport groups, we are committed to achieving net zero by mid 2030s. This involves decarbonising our own infrastructure, including the roll out of fixed electrical ground power (FEGP), which is powered using 100% renewable energy sources.”

British Airways is on course to achieve its target of net zero emissions by 2050 through a series of short, medium and long-term initiatives. These include investment in new aircraft, the development of sustainable aviation fuel and hydrogen-powered aircraft and the investigation of carbon capture technology.

Last week, the airline launched its new BA Better World sustainability programme, marking a further commitment to put sustainability at the heart of its business, from reducing emissions and waste and positively contributing to the communities it serves, to creating a great place for people to work in order to build a resilient, responsible business. The airline also announced a collaboration with bp last week to source sustainable aviation fuel in respect of all flights between London, Glasgow and Edinburgh during the UK COP26 conference.