A new walking tour app is being launched to highlight the story of the Scottish Radical War of 1820 and Paisley’s role in the conflict.

Paisley Radicals: Catalysts for Change is part audio play, part walking tour where history will be brought to life as participants immerse themselves in the stories and places in the town that led an inspiring movement for change. 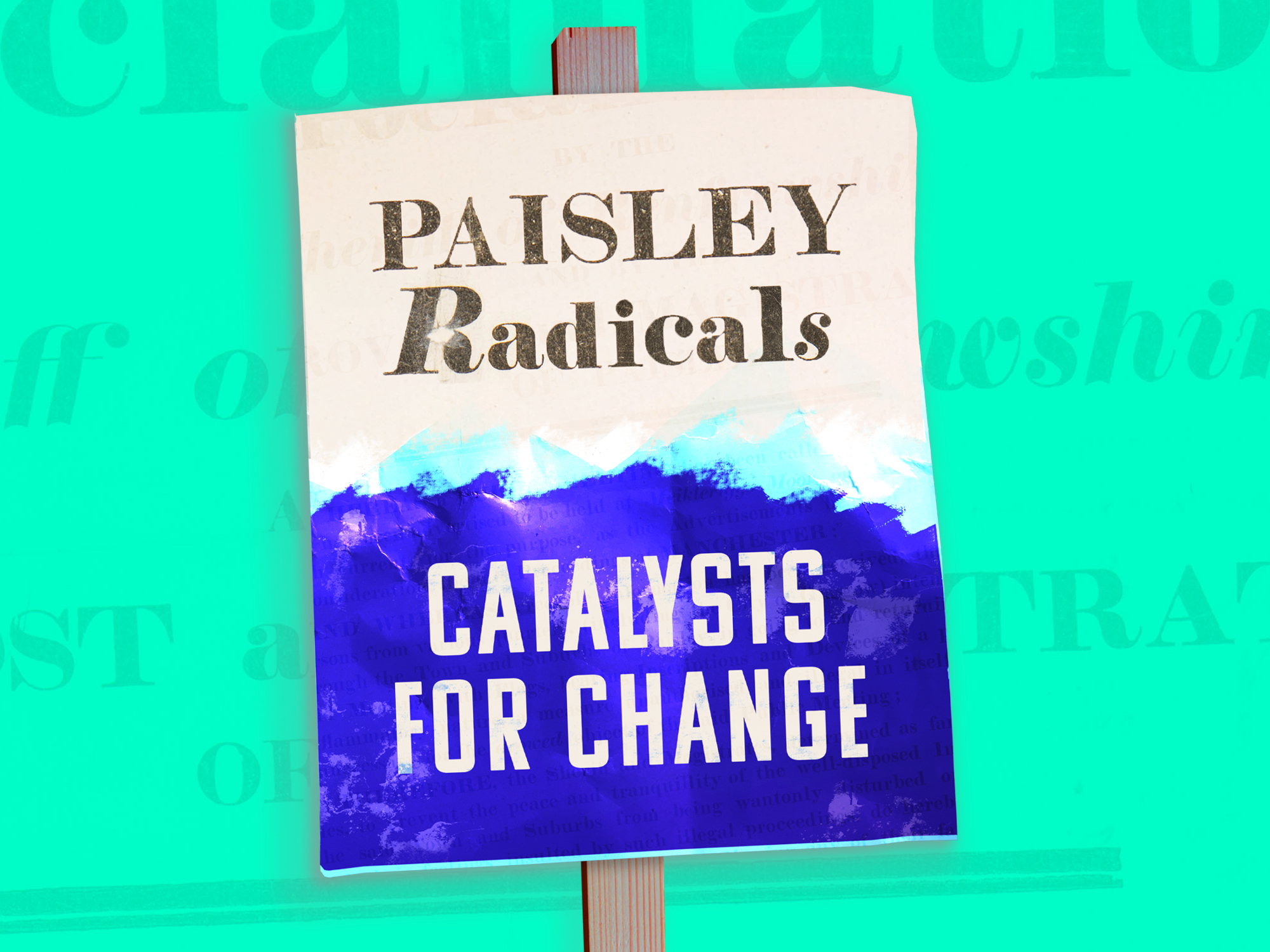 The Radical War was a week of protests and riots across Scotland in April 1820. The government at the time feared civil unrest due to the rising cost of living and levels of unemployment.  A particular connection for Paisley is the gathering at Miekleriggs Muir in Sept 1819 – it was at this time that rioting occurred in the streets of Paisley and the Riot Act was read several times within one week and is the origins of the then Prime Minister Benjamin Disraeli’s comment ‘keep your eye on Paisley’.

Participants begin the tour, which takes approximately 90mins, at Woodside Crematorium and the Martyr’s Chapel and journey from there down the High St passed a number of Paisley’s key landmarks including the statue of May Donoghue, Coats Memorial Church, the statue of John Witherspoon, Willie Gallagher Cairn, Methodist Church – illustrated in the app by local Paisley artist Josef McFadden – then along the River Cart at Forbes Place to Dunn Square finishing at Paisley Cross.

The walking tour app is being launched to coincide with an online programme of events to mark Sma’ Shot Day on Saturday 3 July and has been produced by Civil Disobedience with app development support from Inner Ear, funded by Future Paisley and the Paisley TH.CARS2 programme, which is jointly funded by National Lottery Heritage Fund, Historic Environment Scotland and Renfrewshire Council.

Louisa Mahon, Head of Marketing and Communications at Renfrewshire Council, said: “The launch of the Paisley Radicals: Catalysts for Change walking tour will allow locals and visitors the opportunity to discover more about a fascinating part of Paisley’s history in an immersive and engaging way. By launching the app on Sma’ Shot Day – where we commemorate the historic victory of local weavers – we are acknowledging the town’s long-standing links with the radical movement which remains such an important part of the fabric of the town today.”

Local actors Martin Quinn and Linda Lyon lend their voices to the project to help bring the historical tales to life. 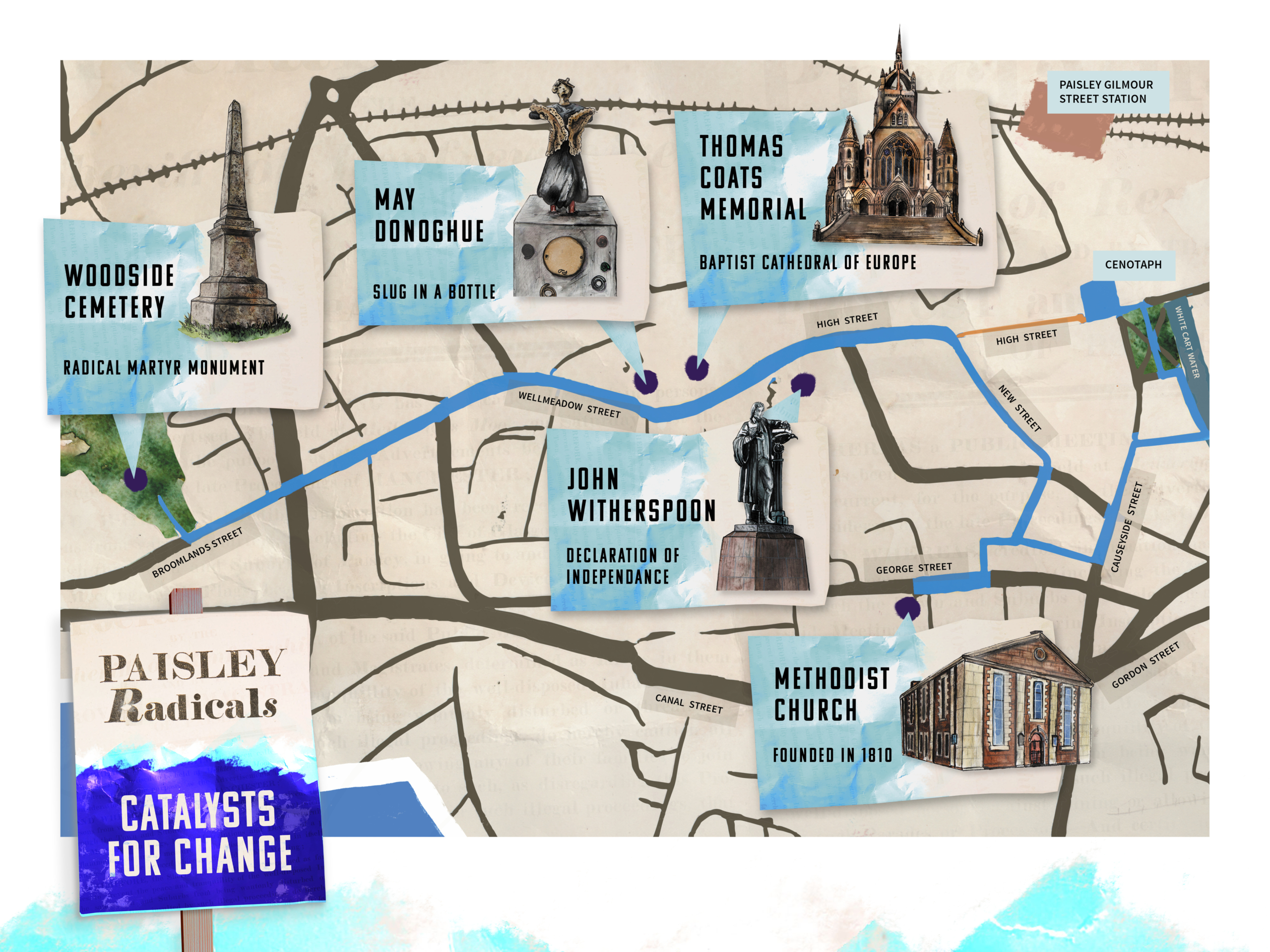 Talking of her interest in the project Linda said: “I wanted to take part in the Paisley Radicals experience as soon as I heard about it. I admire Civil Disobedience’s work and love anything celebrating strength in adversity. As an old Paisley Buddy, I was surprised how little I knew and the format is a fun way to pass on this information.”

Martin said: “After a year of lockdown walks, trying to find different routes to shake things up, I can’t wait to try this app out and add some history to my newfound local knowledge. The more I learn about the Paisley Radicals the prouder I am to be a Paisley Buddy and I can’t wait for other folk to give it a go as well! They’re going to love it!”

To help inform the project a series of creative workshops were carried out by Civil Disobedience with participants from local community group STAR Project working with John Kielty, inspired by the radical history and contemporary relevance; and performance and media students from University of the West of Scotland (UWS).

The group delivered more than 100 hours of contact time with community groups and students from UWS prior to and during the Covid-19 pandemic. Quickly moving engagement from in person meetings to online sessions when restrictions kicked in, continuing to provide a source of creativity and community while staying at home. These sessions resulted in a batch of creative writing, music, theatrical monologues and visual/digital art designs – highlights of these feature in the tour.

Part of the Future Paisley programme, the ‘Paisley Radicals’ project was commissioned in 2020 as part of the 200-year anniversary of the Scottish Radical War. It is a joint production between Renfrewshire Council TH.CARS2 & Events team with support from the 1820 Society and Paisley & District University of the Third Age (U3A); and the Museums team.