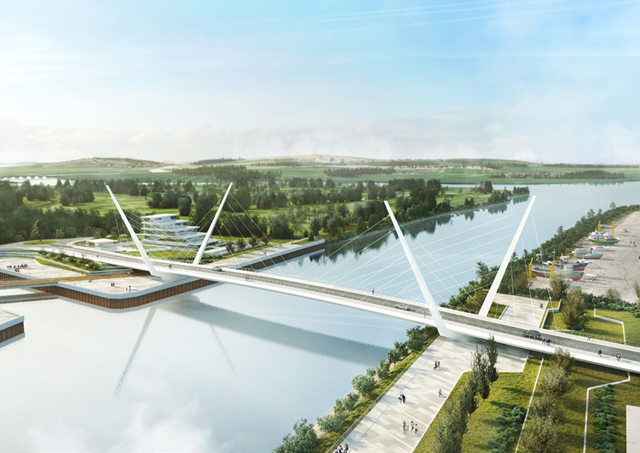 Construction of the Clyde Waterfront and Renfrew Riverside project will help to create jobs now, generate vital work for local suppliers and accelerate Renfrewshire’s recovery from the economic impact of Covid-19.

That’s according to a new report being considered next week by Renfrewshire Council’s Leadership Board which sets out the Final Business Case behind the UK and Scottish Government funded Glasgow City Region City Deal project.

New economic analysis reveals 700 new and existing jobs will be needed to complete construction of the project which is ready to start by Spring and expected to take three years to complete.

Planning consent is in place for the project to transform the Clyde waterfront, which includes a two-lane opening road bridge over the River Clyde from Renfrew to the boundary between Glasgow and West Dunbartonshire.

The construction of the Clyde Waterfront and Renfrew Riverside project will help to create jobs now, generate vital work for local suppliers and accelerate Renfrewshire’s recovery from the economic impact of Covid-19.

That’s according to a new report being considered next week by Renfrewshire Council’s Leadership Board which sets out the Final Business Case behind the UK and Scottish Government funded Glasgow City Region City Deal project.

New economic analysis reveals 700 new and existing jobs will be needed to complete construction of the project which is ready to start by Spring and expected to take three years to complete.

The construction contract is currently being finalised and will see all subcontract and supplier work over £10,000 publically advertised, with supply chain events to encourage bids from local companies.

Community benefits from the main contract will see jobs, apprenticeship and graduate roles, work experience placements, school and college visits and career events provided as well as volunteering and funding for community projects.

Renfrewshire Council Leader Iain Nicolson said: “The impact of Coronavirus on the local economy is being keenly felt by our many brilliant businesses and many people have faced redundancy and unemployment, so it is hugely significant that the Clyde Waterfront project presents an opportunity we can seize upon now of much-needed jobs and opportunities for work and skills.

“To have the project finalised and the contract ready to award is a major boost to our local economy and will help sustain and protect people’s jobs, a lifeline to suppliers and the construction sector. Completing construction will in turn open up access to development sites along the River Clyde, bringing more jobs, opportunities and affordable homes on our doorstep, connecting communities to jobs, hospitals and education centres and create an attractive area along the waterfront.”

The final business case found a further 1,400 permanent jobs and 950 temporary construction roles could follow from the £230million in private sector investment attracted to both sides of the Clyde through improved access to development sites.

Creation of a new road through Renfrew will reduce the volume of town centre traffic and create a more pleasant environment, while there will be improved access to the Clyde footpath and measures to safeguard the local habitat at Blythswood.

And the report highlights the critical importance of the improved infrastructure in attracting more companies to choose AMIDS, the 52-hectare campus for advanced manufacturing being developed by the Council in collaboration with Scottish Government and Scottish Enterprise.

Completion of the underpinning infrastructure, also funded through the £1.13billion Glasgow City Region City Deal, is scheduled for Summer, while construction is also well underway on its first tenants, the National Manufacturing Institute Scotland and the Medicines Manufacturing Innovation Centre.

Councillor Nicolson added: “The strategic significance of Clyde waterfront cannot be underestimated in accelerating our economic recovery and in ensuring the success of AMIDS. We are proud to be developing Scotland’s home for advanced manufacturing in Renfrewshire and £185million in infrastructure, research, innovation and skills facilities have already chosen to base themselves here, bringing with them new jobs and skills development opportunities.

“The enhanced connectivity of the Clyde waterfront infrastructure will be vitally important in attracting more major employers, by opening up access to suppliers and a skilled workforce across the City Region.”

In December 2020, the panel produced an Economic Recovery Plan for Renfrewshire, setting out priority actions for a jobs-led recovery, maximising the potential of capital investment and enabling Renfrewshire to secure its position as the primary location for manufacturing research and development investment in Scotland.

James Lang, Chair of the Renfrewshire Economic Leadership Panel and Director of the UK’s largest leather manufacturer Scottish Leather Group, said: “Renfrewshire’s economy is built on strong foundations and planned investment in infrastructure will be critical to our recovery and growth following the tremendous impact of the pandemic.

“Delivering the Clyde Waterfront and Renfrew Riverside project is vital, in the short-term creating construction jobs and work for local people and longer-term providing a massive boost from the regenerated waterfront and developments that follow. It will also be central to the success of the manufacturing district and I know very well how important access to suppliers and employees is to manufacturing growth.”

Liz Connolly, Principal and Chief Executive of West College Scotland and President of Renfrewshire Chamber of Commerce said: “The Clyde Waterfront Project is a really significant development for the Renfrewshire economy and the wider Glasgow City Region. Initially the construction phase will present real skills development and employment opportunities for local people, ultimately the improved access and connectivity created by the project will lead to significant job opportunities within the region. The project will also give our SMEs an important route to join the supply chain and bid for contract opportunities.”

Renfrew High School Headteacher Billy Burke said: “For our pupils to have these job and skills development opportunities on their doorstep is very exciting. Apprenticeships offer a fantastic route to employment for young people and knowing our town is home to world-leading experts in manufacturing and engineering will be of great inspiration our learners.”

How To Guide Planning a Surprise Birthday Bash
Scroll to top