Eastwood Park Theatre, Giffnock, and Paisley Arts Centre, have received a total of over £161,000 from the open call for applications to the Scottish Government’s Performing Arts Venues Relief Fund through Creative Scotland.

Designed to support performing arts venues that cannot yet re-open due to the ongoing impact of the Covid-19 pandemic, the Fund is helping to:

Iain Munro, CEO, Creative Scotland said: “Despite the ongoing, detrimental impact that the Covid-19 pandemic is having on Scotland’s performing arts venues, and on culture as a whole, it is positive that we can offer some funding to help venues navigate these extremely challenging times. I’m also encouraged to see that this funding will help venues across many different parts of Scotland where they form such an important part of the cultural life of local communities.”

These venues are amongst 59 across Scotland sharing a total of £4.74million from the Scottish Government’s Performing Arts Venues Relief Fund’s £5million open call. A full list of all 59 venues can be found on the Creative Scotland website.

Jude Henderson, Director of the Federation of Scottish Theatre (FST) said: “We welcome the announcement of these emergency awards to performing arts venues across the country. The funds will help to support the vital work they do in serving communities, providing employment and showcasing Scotland’s world class theatre and dance offer, much of which is created by our members.”

The Performing Arts Venues Relief Fund is one of a series of measures being put in place to help mitigate the immediate impacts of COVID-19 on the creative and cultural sector, including five new emergency funds which were announced by the First Minister on Friday 28 August and are being delivered through Creative Scotland as follows:

The previously announced £2.2million Grassroots Music Venues Stabilisation Fund has reached 72 venues across Scotland, including Paisley live music venue The Bungalow. Recipients were published on Tuesday 22 September and full information on awards made, can be found here.

Updates on all emergency funds are being published regularly on the Creative Scotland website and publicised through media and social media communications. 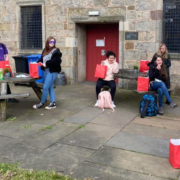