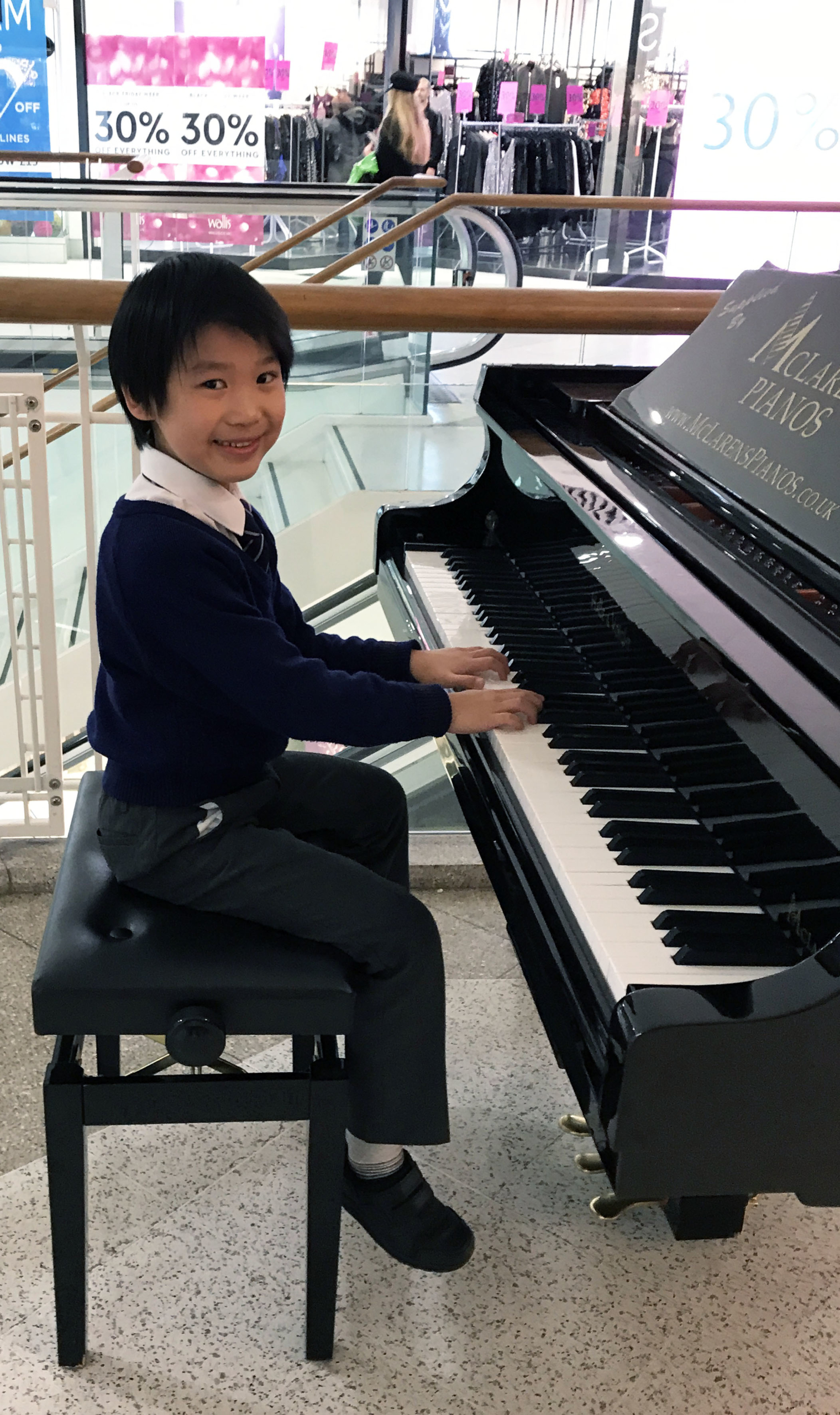 A seven-year-old boy amazed shoppers at intu Braehead with a virtuoso display on a piano that’s been placed in the mall.

Youngster Nathan Lee was described as a “genius” after he climbed on to the stool at the piano and gave people an impromptu mini-concert.

A crowd gathered around the piano in the upper mall between Marks and Spencer and Café Nero and gave Nathan a round of applause after a faultless, performance of Mozart’s Turkish March; Flight of the Bumblebee, by Rimsky Korsakov and the more modern ballad, All of Me, by John Legend.

Amazingly, Nathan, from Glenburn, in Paisley has only been playing the piano and taking lessons for two years and his school friends at Glasgow Academy have already dubbed him King of the Piano.

The youngster was at intu Braehead with his mum and dad, Ning and Eddie, who runs the Kwang Tung Chinese restaurant, in Paisley. When Nathan started playing shoppers couldn’t believe how good he was and stopped to video the youngster.

When he finished people coming over to his parents to tell them how brilliant their son was on the piano.

Another man in the cafe told them: “That’s an amazing talent he has. I can’t believe he’s so young and can play the piano like that.” 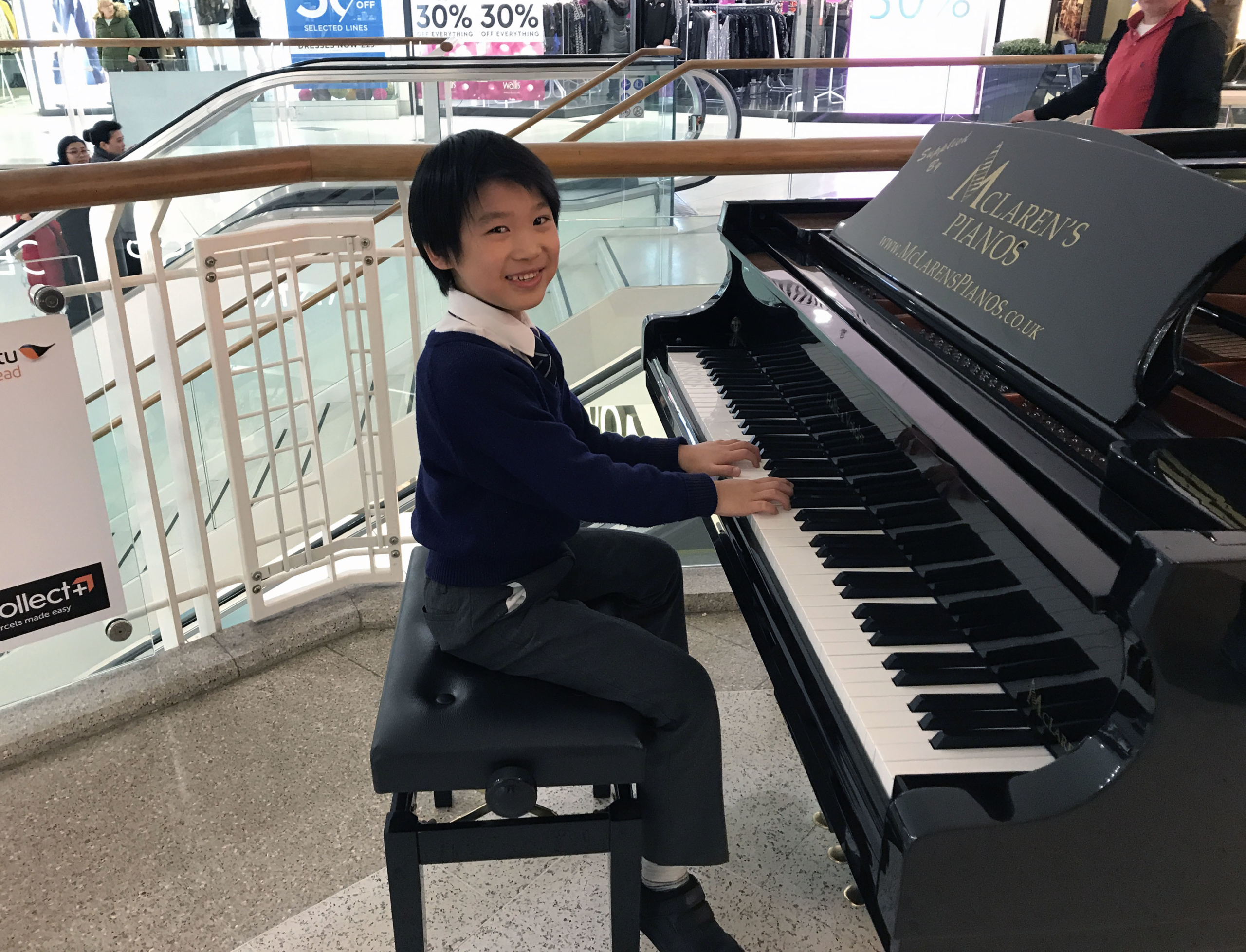 A woman added: “I’ve never seen anything like it. The speed of his fingers going over the piano keys was mind-boggling and he’s so small his feet couldn’t even reach the ground when he was siting on the stool.”

Nathan’s dad Eddie said: “We don’t know where he gets the talent to play the piano from because neither his mum nor I are very musical.

“We noticed Nathan liked the piano because when he was younger every time he passed a piano he wanted to try to play it. We decided to get him lessons and it’s just gone on from there.

“After about a year having lessons we began to realise just how good he was, as he was then able to play full tunes and he sounded great.

“At the start, nobody at his school knew he could play piano, but at the end of Primary One when all the children were to perform something, Nathan said he would play the piano.

“That’s when we got a phone call from his teacher to say everybody was stunned how good he was. And then the older pupils started calling him King of the piano. We’re really proud of him.”

Eddie added: “We don’t know if he’ll go on to be a professional musician because although he can practise up to three hours some days, he says he wants to be a footballer when he grows up!”

Nathan’s piano teacher, Charles Dunn said: “Nathan has a rare musicality for his age and exciting potential. I also see a maturity in his playing, a remarkable enthusiasm and work ethic and he just loves performing

“He’s fantastic and I’m really proud of him.”

David Lyon, intu Braehead’s marketing manager said: “When Nathan started playing and our security staff saw the people stopping to listen to him play, word soon spread that there was an amazing boy playing the piano and everybody has been talking about him.

“We always like to bring a little fun and entertainment for visitors to intu Braehead and the piano that’s in the mall is self-playing, as well as being able to be played normally. Nathan is an amazing talent and the shoppers loved him.”

Glasgow News? Daily Updates part of our network
Paisley is the place to be this Christmas!