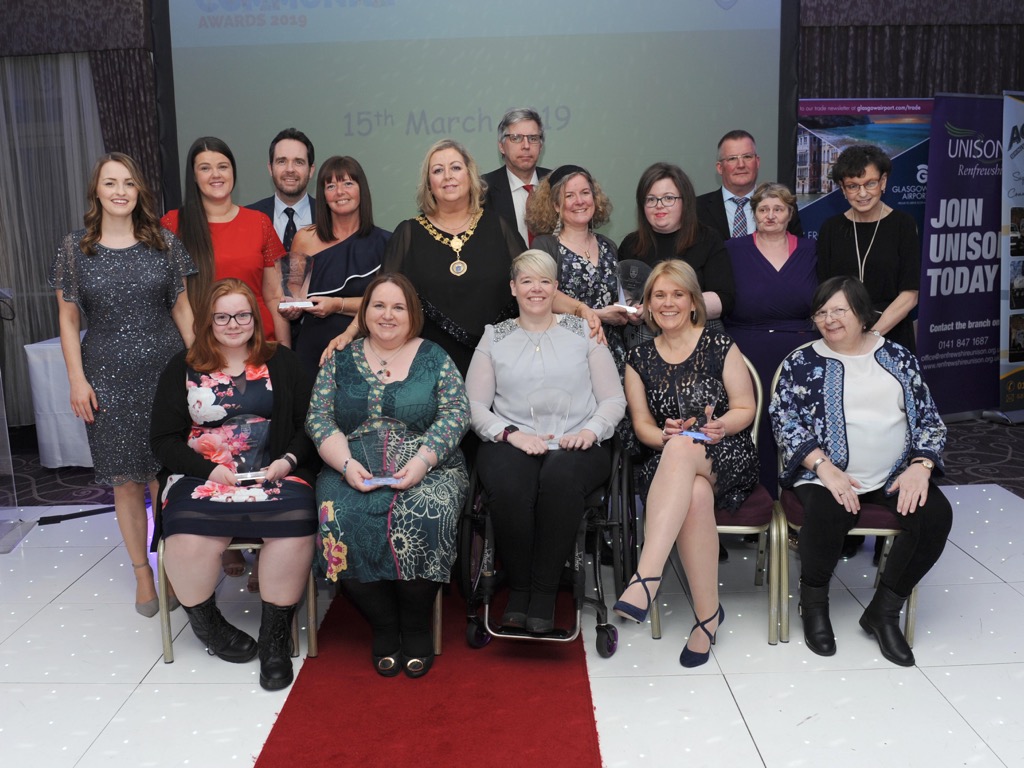 Renfrewshire has honoured dedicated groups and volunteers for their work in the community as the Provost’s Community Awards took place this weekend.

Renfrewshire’s Provost Lorraine Cameron was joined by comperè Libby McArthur to help celebrate the achievements of devoted community members who go above and beyond to make Renfrewshire a better place to live and work.

The awards were split across six categories, including a revamped award for employees to recognise their hardworking staff. 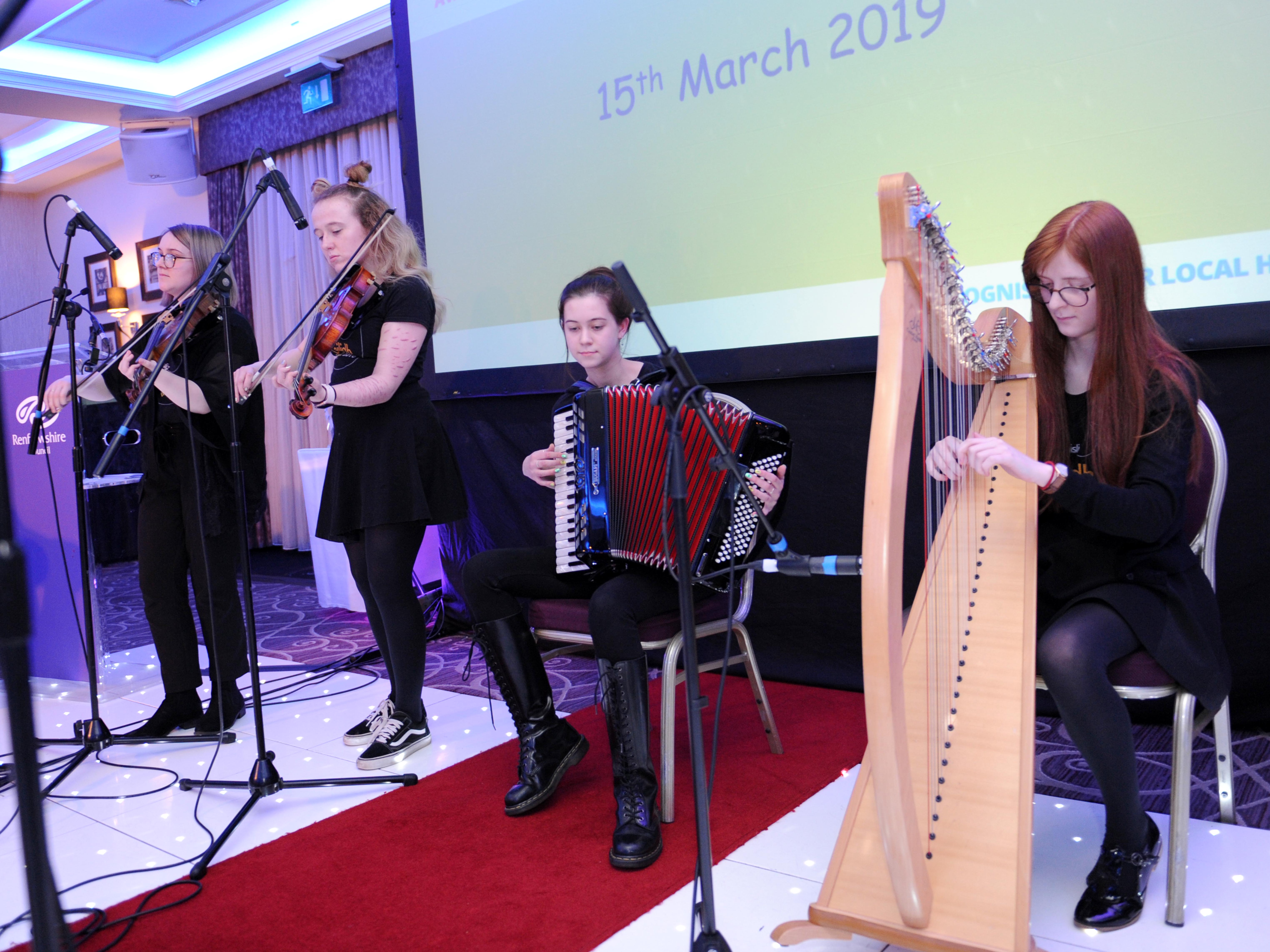 The award winners were invited to a special ceremony at the Lynnhurst Hotel in Johnstone after being chosen from more than 60 outstanding nominations submitted by their peers in the local community. 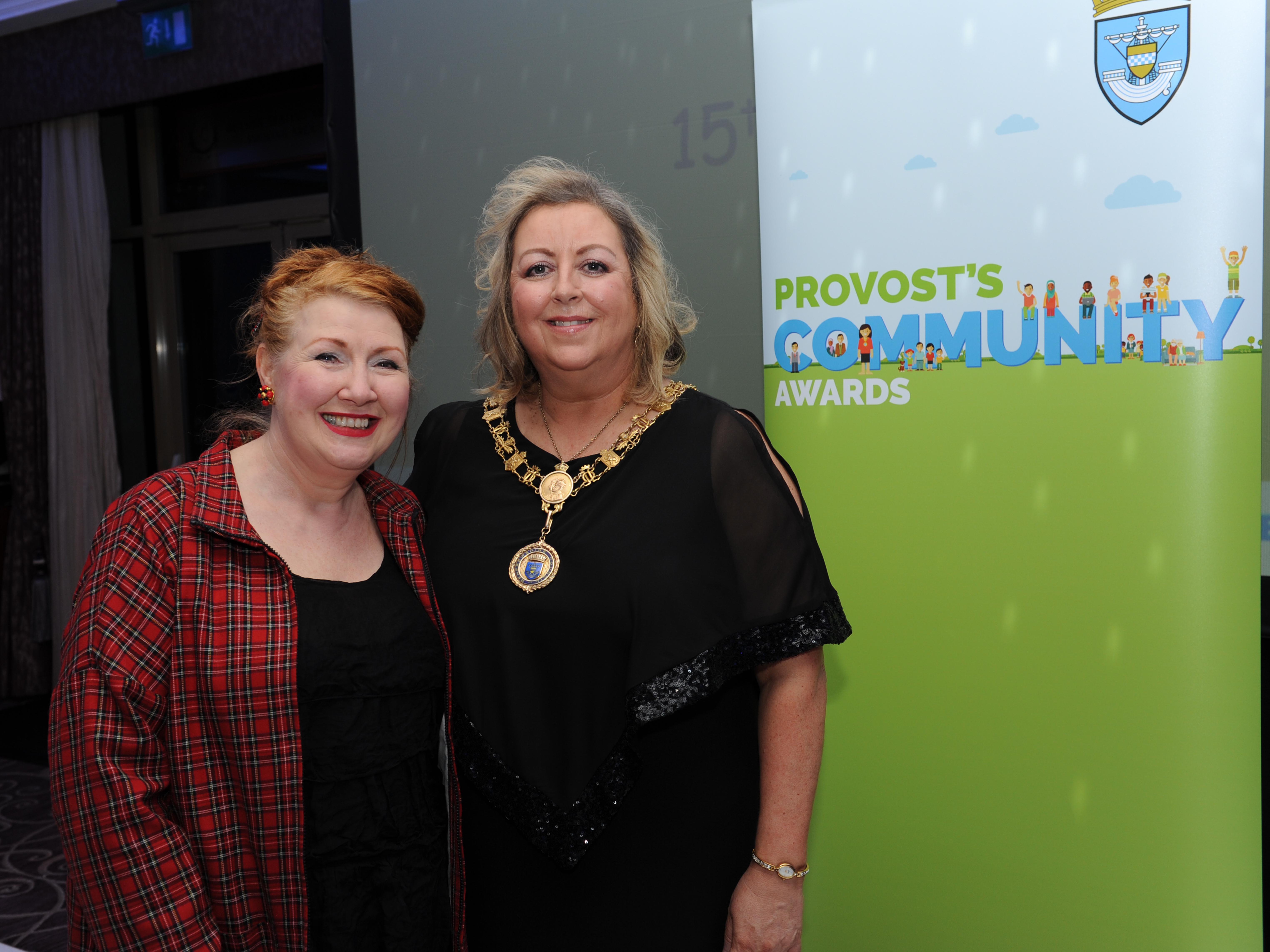 Preceding the presentation of the awards, Fèis Phàislig Ceilidh Trail entertained the invited guests with a selection of traditional tunes and songs. 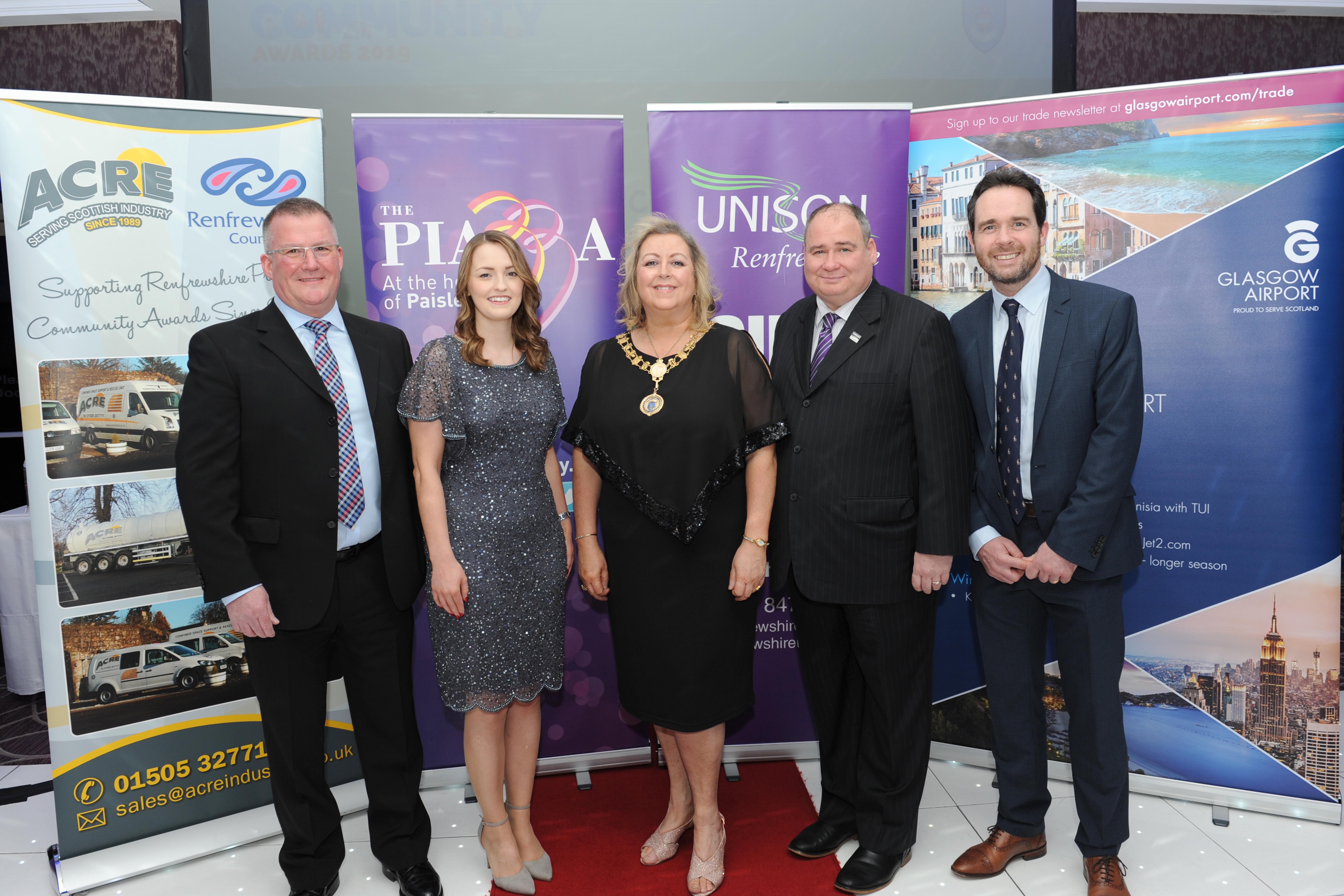 Arts and Culture (sponsored by Renfrewshire Council) – The Buddy Beat

Community Group (sponsored by the Piazza Shopping Centre, Paisley) – Pals of the Privies

Employee of the Year (sponsored by UNISON Renfrewshire) – Tracey MacNab

Renfrewshire’s Provost Lorraine Cameron said: “The Community Awards outline the talent, the enthusiasm and the determination that we are lucky to have in Renfrewshire and every one of this year’s winners are an inspiration.

“It is a privilege to work through the applications with my fellow judges and I never tire of seeing the outstanding work going on in our communities.

“Congratulations to all our winners, you deserve to be rewarded for your fantastic work to make Renfrewshire a better place and I’m delighted to be able to recognise you through these awards.”

Jamie cares for her mother and her father who both have mobility issues. She faces challenges as her caring responsibilities can limit her opportunity to go out with friends. However, she always puts others before herself. She created a ‘Buddy bench’ at her old primary school from her own money to help children who are feeling lonely or struggle with friendships.

Joanna was diagnosed with spinal tumour which led to paralysis from the chest down and spent six months in hospital. As part of her rehab she started wheelchair rugby and helped form the only team in Scotland. She applied for the UK Talent ID programme (Girls for Gold) and was selected. Six months after starting the Club Throw (Paralympic version of the hammer), she was selected for GB at the European Championships 2014 where she won gold, with a new European record in the F51 Club Throw.

The group have transformed Glencoats Park from a wilderness into a thriving family park. They have embraced the council’s Team Up to Clean Up campaign and have been a shining light of what can be done with enthusiastic, driven volunteers. Community events have been held in the park, primary school classes can now take place there and it is a haven for elderly people and dog walkers. It is kept litter free and new benches have been installed for elderly residents.

Employee of the Year (sponsored by UNISON Renfrewshire) – Tracey MacNab

Tracey has worked for the Good Shepherd Centre for 12 years and has played a crucial role in developing the through-care service for young people, which ensures they move on to a positive destination. She developed the Tenancy and Citizenship Award which is now an SQA qualification and works with external agencies to provide young people with the opportunity for training, work experience and employment. Tracey arranges for external agencies to come in and present to the kids on a variety of topics and explain the real-life consequences of their actions.

Heather has been carrying out litter picks for more than nine years to keep her area clean and is a big supporter of the Team Up to Clean Up campaign. She has worked closely with Keep Scotland Beautiful to carry out pilot projects, including providing dog fouling bags on walking routes to measure the difference in dog mess left behind. Her creation ‘Erskine Community Garden’ received the second highest ‘It’s Your Neighbourhood’ award from Keep Scotland Beautiful. Heather has arranged a number of community events in the garden. She’s an ambassador for Erskine Hospital and has organised the Erskine Motorbike Meet since 2010 – raising almost £100,000.

Arts and Culture (sponsored by Renfrewshire Council) – The Buddy Beat

The Buddy Beat are a drumming group aimed at improving mental health and promoting social inclusion, who have been running since 2007. The group meets 50 weeks a year and use music to help self-confidence, self-belief and self-worth. It has empowered many to move onto further education, volunteering and employment, while session leader Tom credits the programme with saving his life.

Spring into action with Street Stuff
Scroll to top