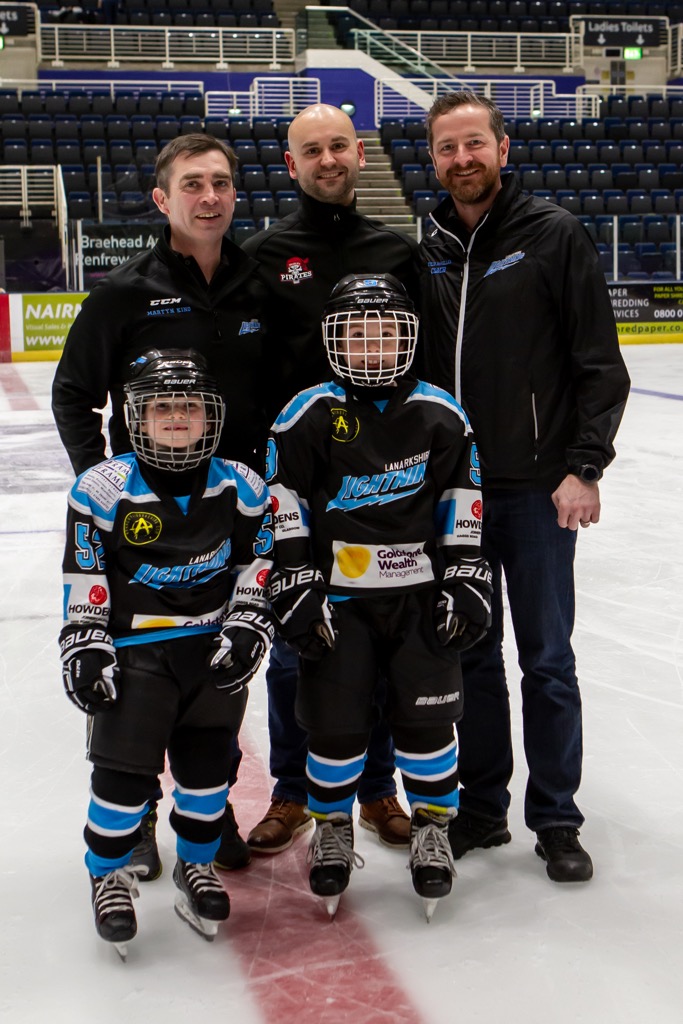 A dream debut, inspirational net minding, and a scorching team performance in the second period were the main features in a match which saw Pirates bring down the Kestrels.

The visitors had the better of the opening session but found John Russell in the home goal in spectacular form as he repeatedly turned away goal bound efforts and kept his side in the game when, if they weren’t out of it, they were certainly playing second fiddle to a fast breaking Kestrels side, who eventually took the lead in the 16th minute when Flood finally produced a shot to beat the netminder. With the clock running down, it looked like they would go into the break with a narrow advantage, but with Pirates shorthanded in the last 30 seconds their netminder Jackson could only direct a clearance towards an opponent and the puck was quickly transferred to debutant Abercrombie who flicked home and give his new side a slightly fortuitous equalizer.

Russell was again the busier netminder in the opening stages of the middle session but in the space of 17 seconds, after 27 minutes, the game changed dramatically. Following a sortie round the Kestrels net, Pirates were awarded a penalty shot, and Abercrombie stepped up to coolly slot the puck beyond Jackson and put the home side in front, Straight from the face off, Pirates broke again through Thorp who wasted no time in smashing the puck home to give his side an unlikely 3-1 lead. The home side were inspired by the sudden change in fortunes and were now having the better of the exchanges, and another two goal burst in 25 seconds late in the period saw first Guy skating through to beat Simpson, who had by this time replaced Jackson in the visitors’ net, and then Forbes set up Abercrombie to score his hat trick goal with ease, and send Pirates to the dressing rooms with a 5-1 lead, a scoreline which no one would have predicted at the start of the session.

In the final session, the visitors were looking for a quick goal to give them a flicker of hope, and they got it after 43 minutes when Robertson scored with a shorthanded effort for 5-2. Chances continued to appear at both ends of the ice, but it took until six minutes from time for the final goal of the night to arrive, as Spiers broke from his own zone to skate to the other end and Abercrombie was waiting for the defender’s inch perfect pass to net his own fourth, and his team’s sixth, to put the final touch on a very satisfying evening for the home side.

Pirates will be delighted to have beaten a close rival by such a convincing scoreline and now await the visit of local rivals North Ayrshire Wild this SATURDAY to Braehead Arena in a match which faces off at 6.30pm

Fresh from their enthralling 6-2 win over Kirkcaldy Kestrels last Sunday night, Paisley Pirates are already preparing for another Christmas cracker as they play host to local rivals North Ayrshire Wild this SATURDAY at Braehead Arena in a match which faces off at 6.30pm.

Pirates have already faced the Wild three times this season, securing two draws and a narrow 2-0 win, and they anticipate another close encounter of the icy kind this coming Saturday, in their final match before the festive break.

Pirates have their confidence boosted by the form they showed in defeating their east coast opponents last weekend, but know they will have to be on top of their game to defeat the Wild, who have already shown they have a sting in their tail as they scored twice in the last minute in one of the draws fought out this season.

Off Ice Operation Manager Jackie Turley said, “It was a cracking match last Sunday and the support from the crowd, and the atmosphere generated, certainly helped make it a great night. We’re hoping we can get a large crowd creating a similar noise level against the Wild, who will no doubt be bringing some of their own supporters with them, so we’re hoping to send our fans home with a smile on their faces for Christmas. We’ll be more than happy to welcome in Christmas shoppers, complete with presents, to support their local ice hockey team.”

Paisley Pirates and Lanarkshire Lightning Ice Hockey Clubs have joined forces in a move which will see young players have the opportunity to progress from rank beginners, through to a pathway which will eventually give them the chance of playing for the Pirates at Scottish National League level, under the tutelage of Head Coaches Martyn King for Lightning, himself a former Paisley Pirate, and Ian Turley, for Pirates, who is also part of the coaching team got the Scotland Under-17 squad.

It is hoped that the formalised link between the two clubs will help develop young players who show themselves to have the skills and aptitude to progress and develop to a high standard, and spokespersons for both clubs expressed excitement at the opportunities which will open up to youngsters wishing to progress in their favourite sport.

Jim Paterson, Chair of Lanarkshire Lightning, commented, “This is a wonderful opportunity for our players. Not only have they already shown their ability to learn and develop as ice hockey players within this club, they will now get the opportunity to take their development on to an even higher level by having the chance to train and play with the Pirates, and hopefully some of them will go on to play for Paisley in the SNL when the time comes. In the few short years since the Lightning were formed we like to think that our youngsters have progressed at an astonishing rate due to the excellent opportunities and coaching that they’ve had the opportunity to experience so far, and our new link with the Pirates ensures that such progression will continue to an even higher level. It also maps out  a direct path for potential new members who perhaps see themselves playing at SNL or above in the years to come, regardless of the level at which they are at currently, and shows that by becoming a member of Lanarkshire Lightning they are likely to receive the very best of development opportunities all the way through to senior level.”

“Our club already has strong links with the Pirates through former players such as Martyn King, Colin McMillan and Robert Henderson being involved in our coaching team, and, indeed, their own kids are progressing through the ranks with us, so these new links only strengthen the strong ties we already have with them.”

Paisley Pirates Head Coach Ian Turley was equally excited about the new partnership. “We already have a good strong relationship with Lanarkshire Lightning, with the core pf their coaching staff having previously iced for the Pirates. This new relationship makes sense, as we don’t currently have a full junior set up and Lanarkshire Lightning don’t have a senior team. Hopefully this will be the start of providing a pathway for kids to develop into Pirates and beyond at senior level. We’re really looking forward to working with the Lightning coaches, to ensure that we’re always focusing on player development, which is our number one priority, and one which we believe is shared by the Lightning. Both clubs are committed to developing players of all ages in their respective catchment areas and beyond, to enable them to reach a high level of the sport in Scotland.”

Jackie Turley, Head of Off Ice Operations for the Paisley Pirates, commented, “The parents and kids of the Lightning have become a regular element of the Pirates’ activities through their attendance at games and the latter have been mascots for the club at SNL matches for a number of years now. It’s great to see a willingness by both clubs to take this relationship on to the next stage, as the building bricks have obviously been there for a while now, and this new development can only be good for both clubs and, particularly the junior players who now have a wonderful opportunity to progress through the ranks as far as their skill, aptitude and character can take them. We’re certainly delighted to have this chance of working even more closely with our good friends at the Lanarkshire Lightning club.”

Glasgow News? Daily Updates part of our network
Don’t risk it behind the wheel over the festive period