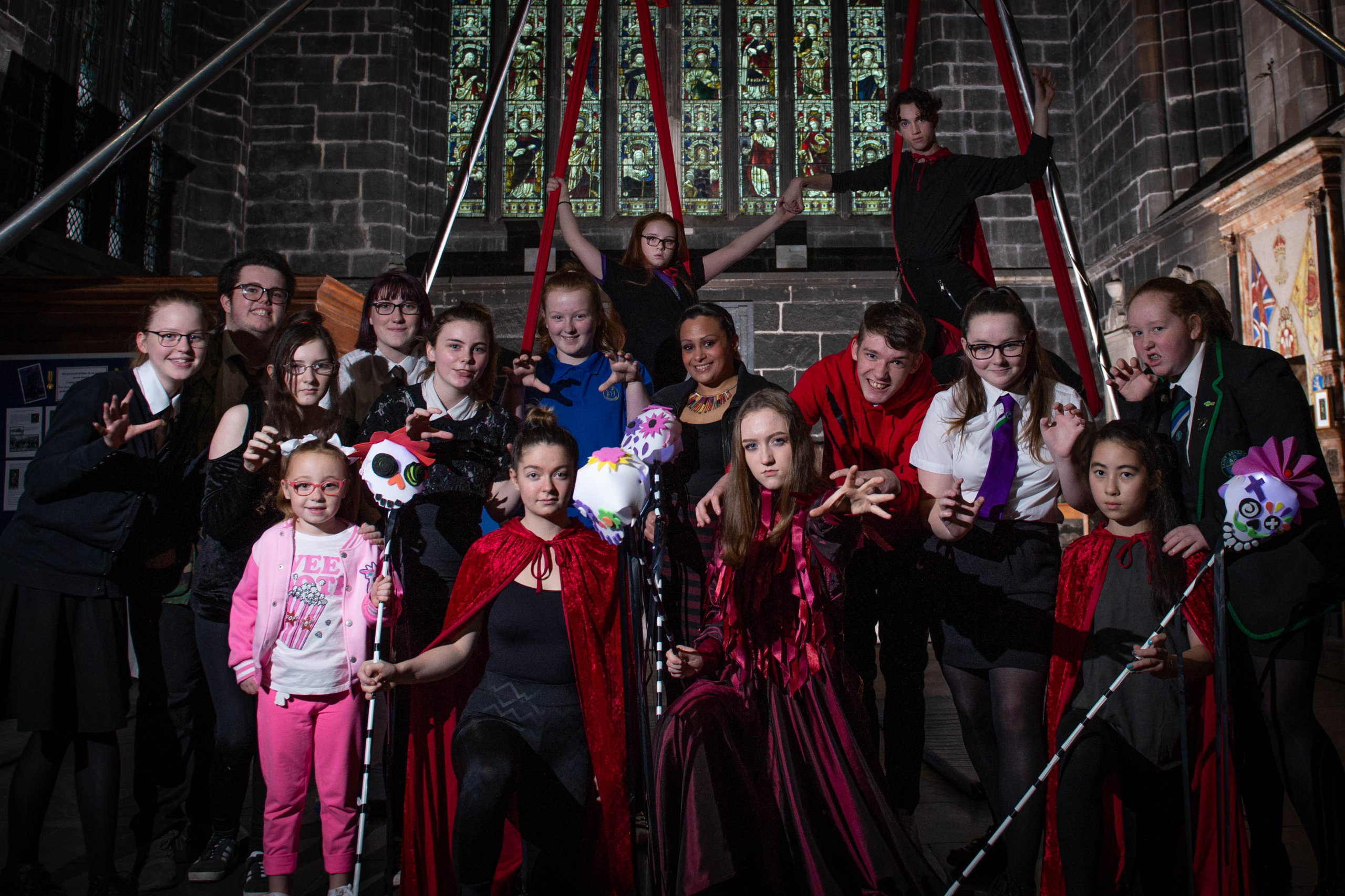 From soaring through the air as part of a witches aerial performance, creating spooky parade floats and working behind the scenes, more than 700 young people are at the centre of Paisley’s Halloween Festival. 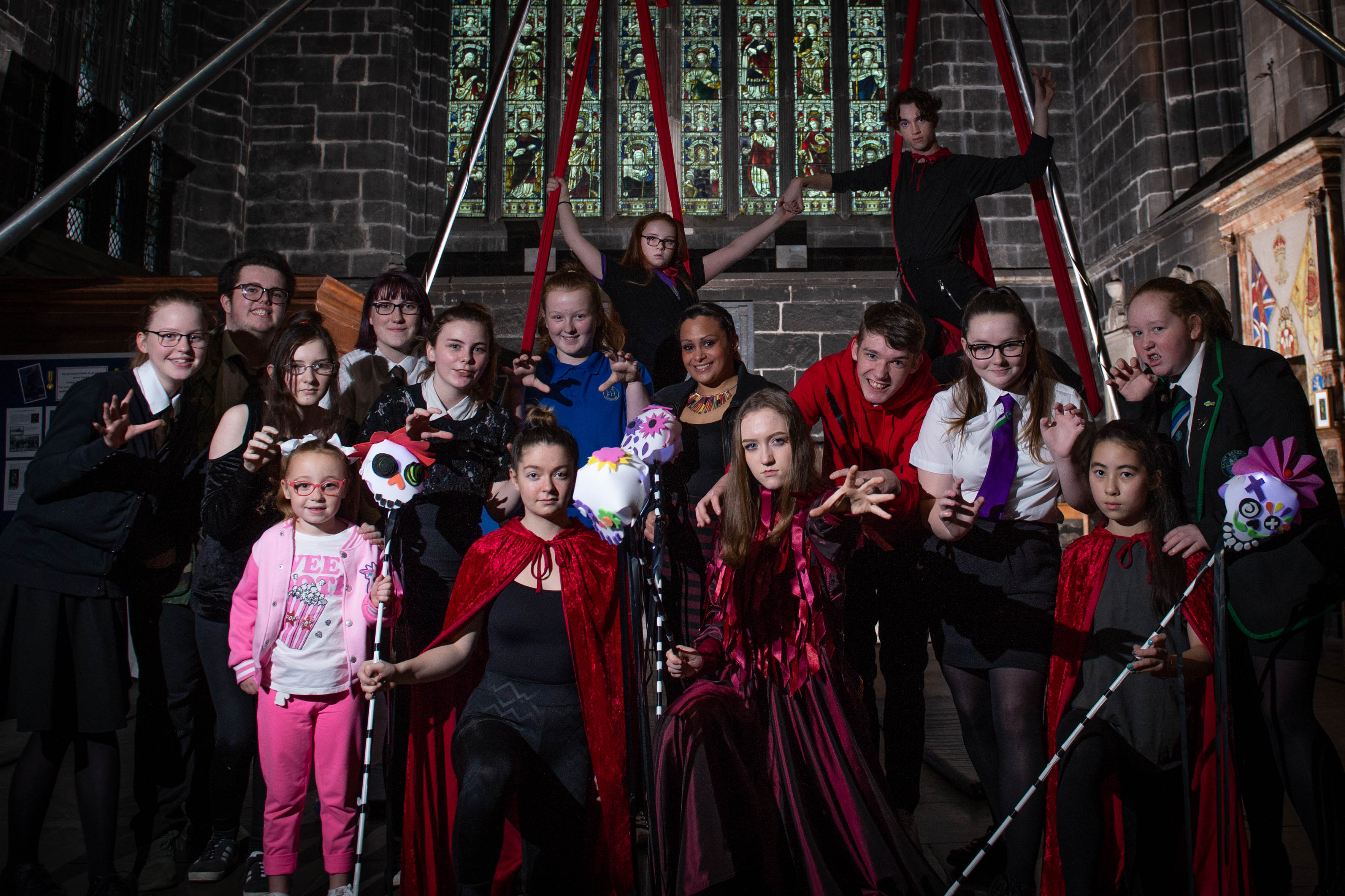 Renfrewshire’s Year of Young People Champion, Councillor Michelle Campbell, met with some of the volunteers, mentees and Youth Panel members as the town gears up to welcome up to 30,000 visitors to the annual extravaganza this weekend, which is supported by the Year of Young People 2018. 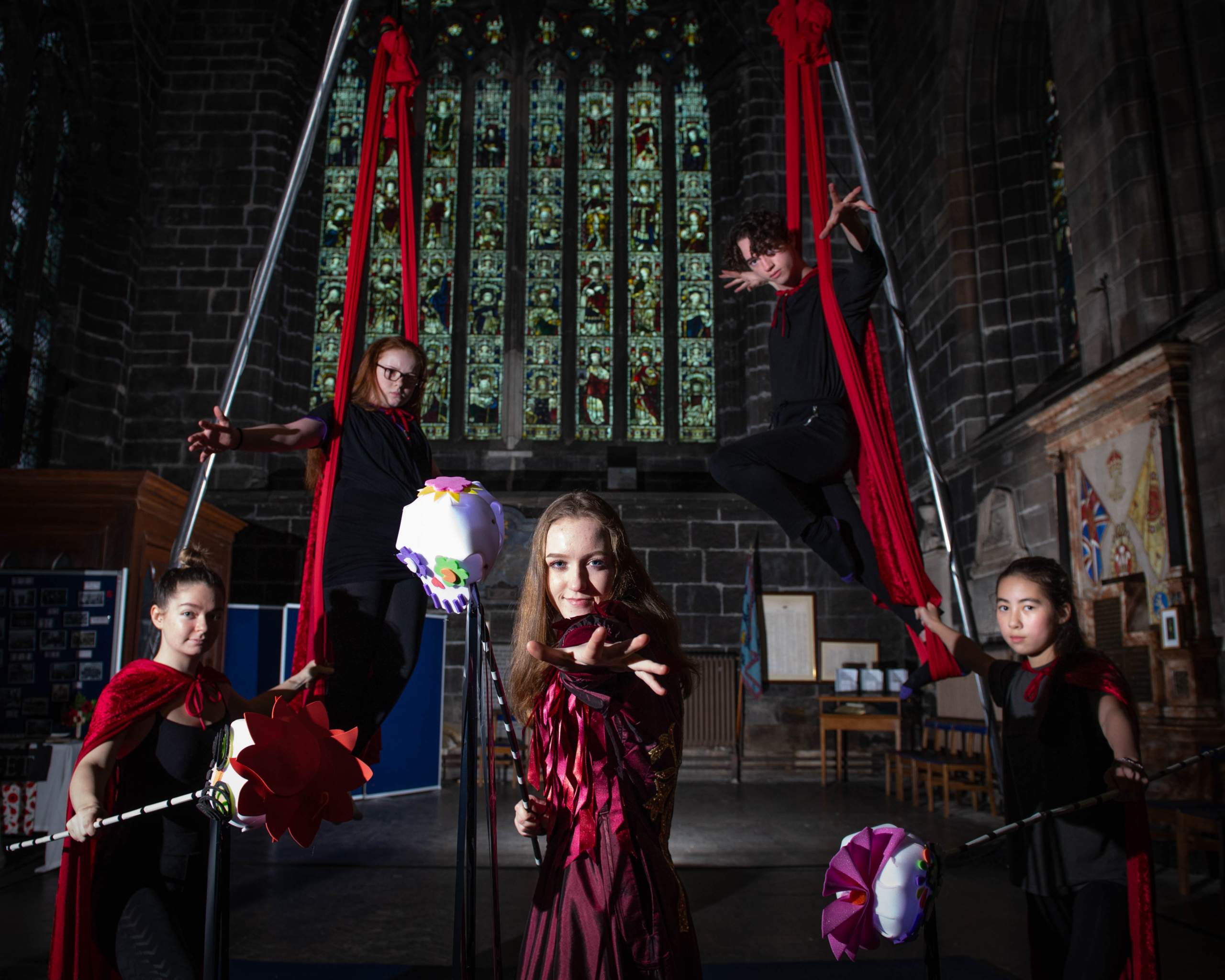 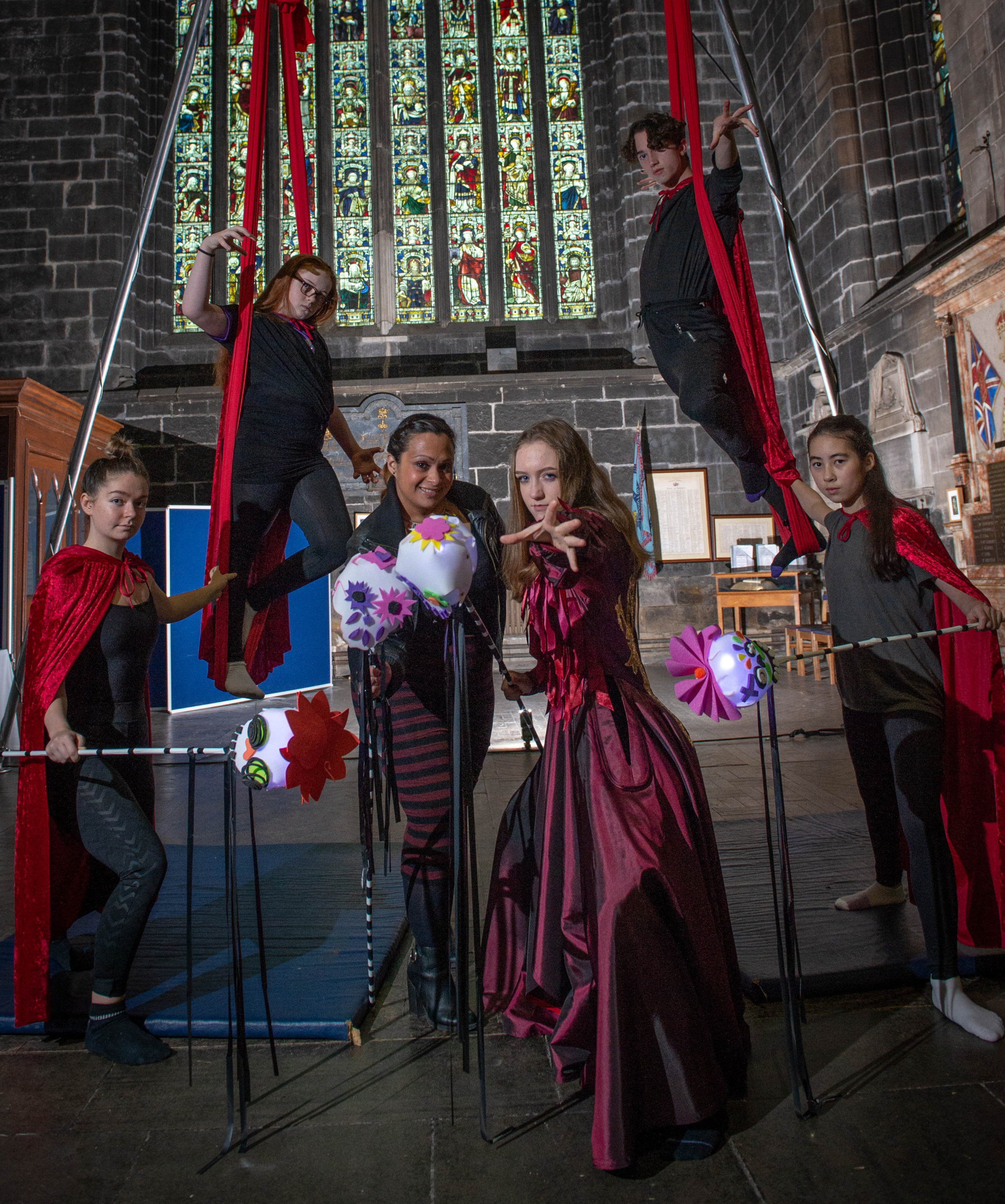 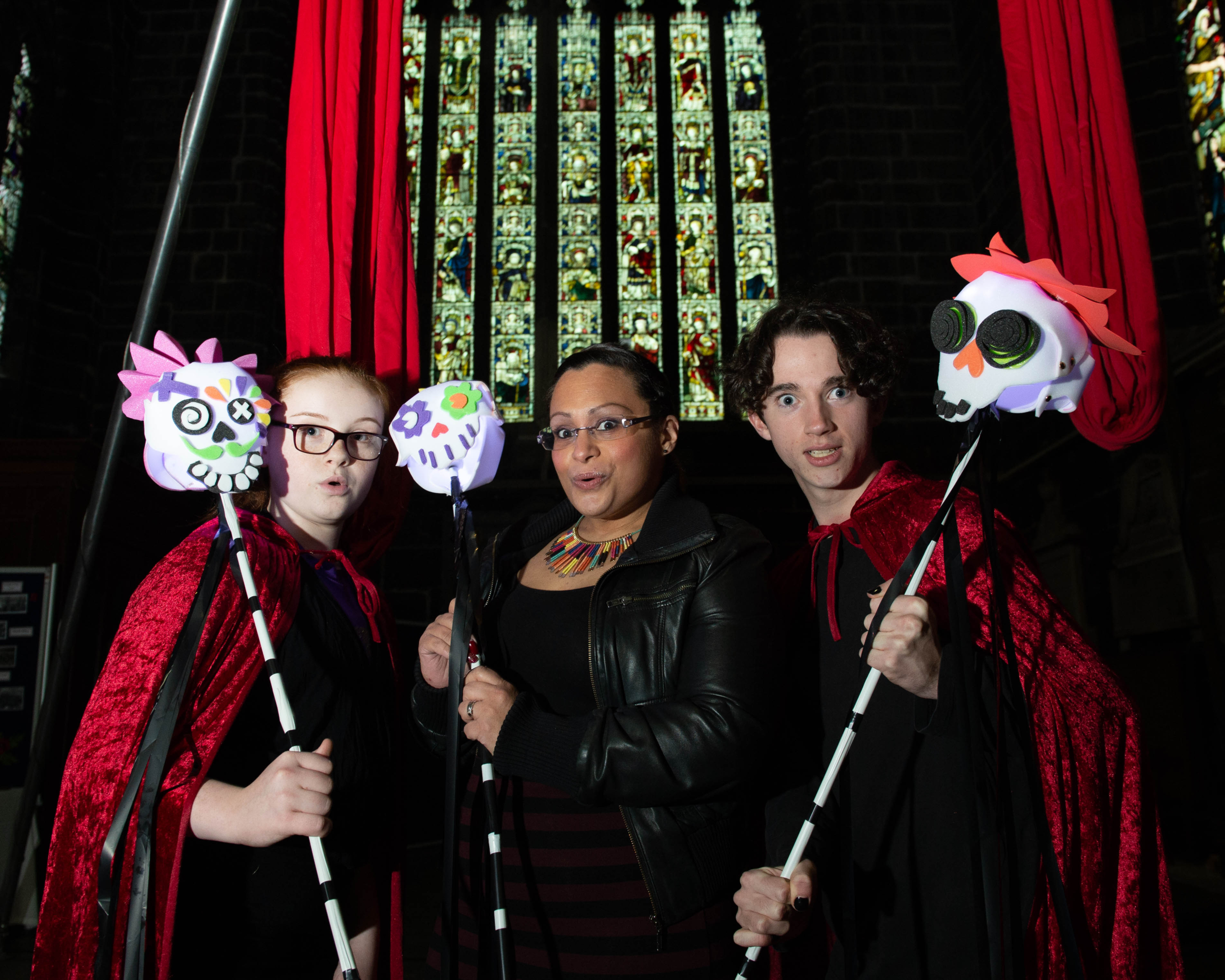 Leading creative companies aerial dance outfit All or Nothing, parade specialists Bridgeman Arts and pyro experts 21cc, have been working with local young people, while a 20-strong Youth Panel has been helping to create the event in tandem with Renfrewshire Council’s dedicated Events Team.

There have been 1,200 creative learning opportunities offered by the spectacle, which is supported by the Year of Young People 2018 event fund managed by EventScotland, part of VisitScotland’s Events Directorate.

Young people have attended masterclasses and workshops and are involved in every aspect, from performance to live event management and technical production.

Around 500 young people will also take part in a Mardi-Gras style parade this Saturday, which will start winding its way through the town centre at 6pm, passing lighting installations and haunting soundscapes along the way.

There will be a series of three separate aerial performances with flying witches suspended 120 feet above the Town Hall from 7pm onwards, making sure no one misses the spectacle.

Year of Young People Champion, Councillor Michelle Campbell said: “Young people are at the very heart of this event and it’s been great to hear about all the different opportunities and experiences they’ve been able to access through taking part.

“As co-creators of the festival, they’ve been able to have their say on every aspect of the event, from the design through to the actual technical production.

“They’ve also been able to develop and showcase their skills through performing or behind the scenes work, and it’s been great to hear how the experience is helping to set many of them on the path to pursue related careers.

“The creative learning programme will help those who would like to become involved professionally in organising large-scale future events like this weekend’s festival.

“It’s also been wonderful to hear how many of the young people are also using the opportunity to be involved towards earning volunteer awards like the Saltire Awards and the Duke of Edinburgh scheme.”

“Renfrewshire’s young people are very impressive and have blossomed being part of this event.”

Some of those taking part will also receive a special legacy ‘Spirit of Halloween’ award at Renfrewshire Council youth services’ Positive about Youth Awards in December.

Patrick Docherty, 16, is taking part in the aerial display and said: “It’s been a lot of fun and I’ve had the opportunity to do things I would never have thought of.

“It’s good to be challenged and learning new skills has made me feel more confident. I’ve also made lots of new friends.”

There will be a packed programme of free family fun in the lead up to the parade, including themed workshops, a live stage and a funfair.

The full programme for the Paisley Halloween Festival 2018 is available at: https://paisley.is/featured_event/paisley-halloween-festival-2018/

Glasgow News? Daily Updates part of our network
Proposals seek to support more children to learn within their own community

Practice May Not Make Perfect, But It Is Vital When Starting Trading
Scroll to top