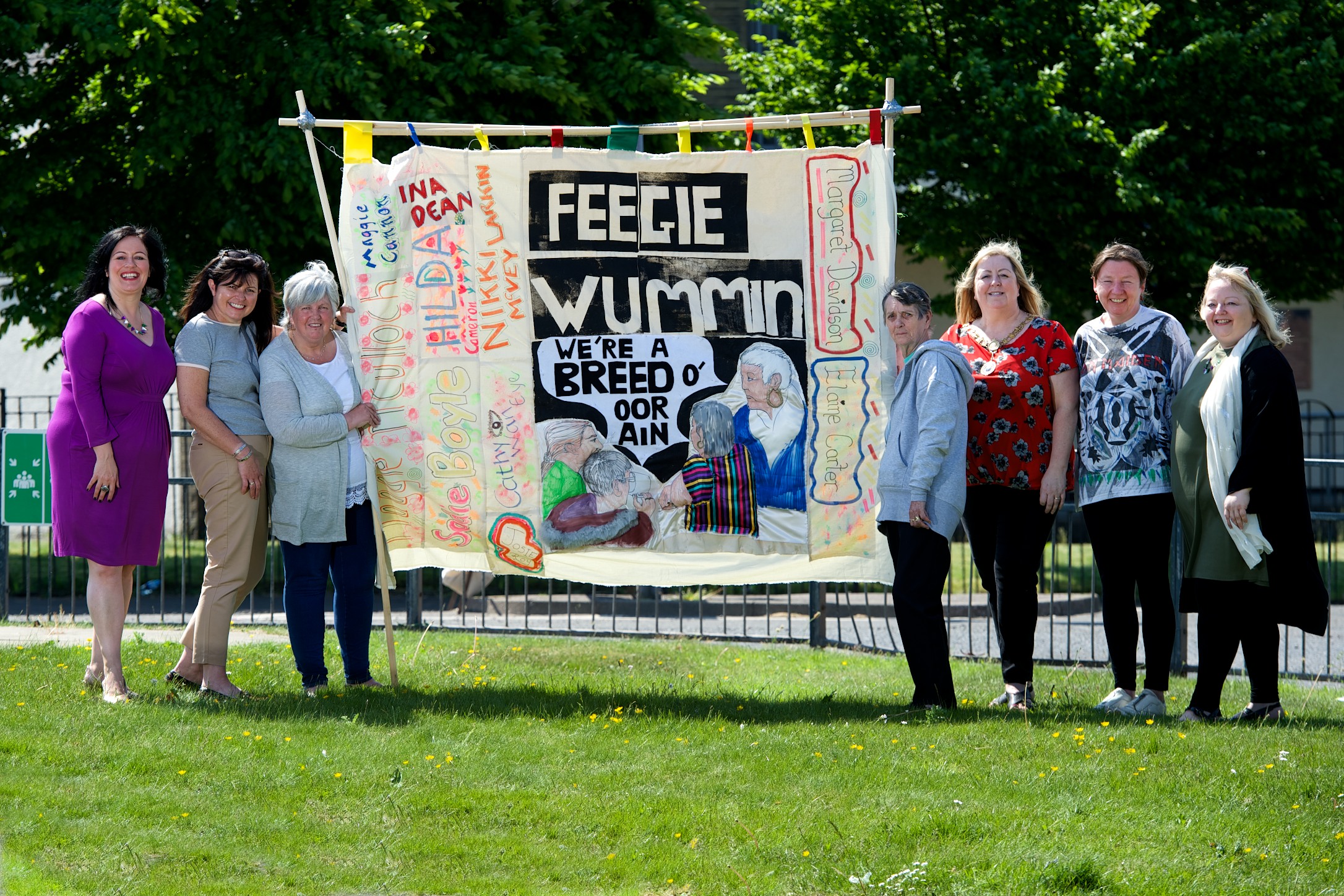 A group of women from Ferguslie Park will join thousands from across the UK at the weekend to celebrate 100 years since women were given the right to vote.

On Sunday 10 June, women and girls from across the UK will come together to take part in PROCESSIONS, a mass participation artwork. Wearing green, white or violet, the colours of the suffragette movement, rivers of colour will flow through the streets of Edinburgh, London, Cardiff and Belfast.

Joining them, will be a group of women from Paisley’s Ferguslie Park who have been taking part in the 100 Years 100 Banners programme, where 100 organisations across the UK collaborate with 100 female artists to create 100 unique banners for PROCESSIONS.

Based within The Tannahill Centre, the banner is an intergenerational collaborative work between Strong Women in Ferguslie Together (SWIFT), The Feegie Needlers and a variety of young women from local youth groups.

The group held workshops talking about issues that matter to them, raising awareness of the important role women play in the Ferguslie community and helping them to understand that their voices matter.

This has been incorporated in to the banner which features the names of women who have contributed to the wellbeing and creativity of the community, with many of the women mentioned being relations of those who are working in the community today. 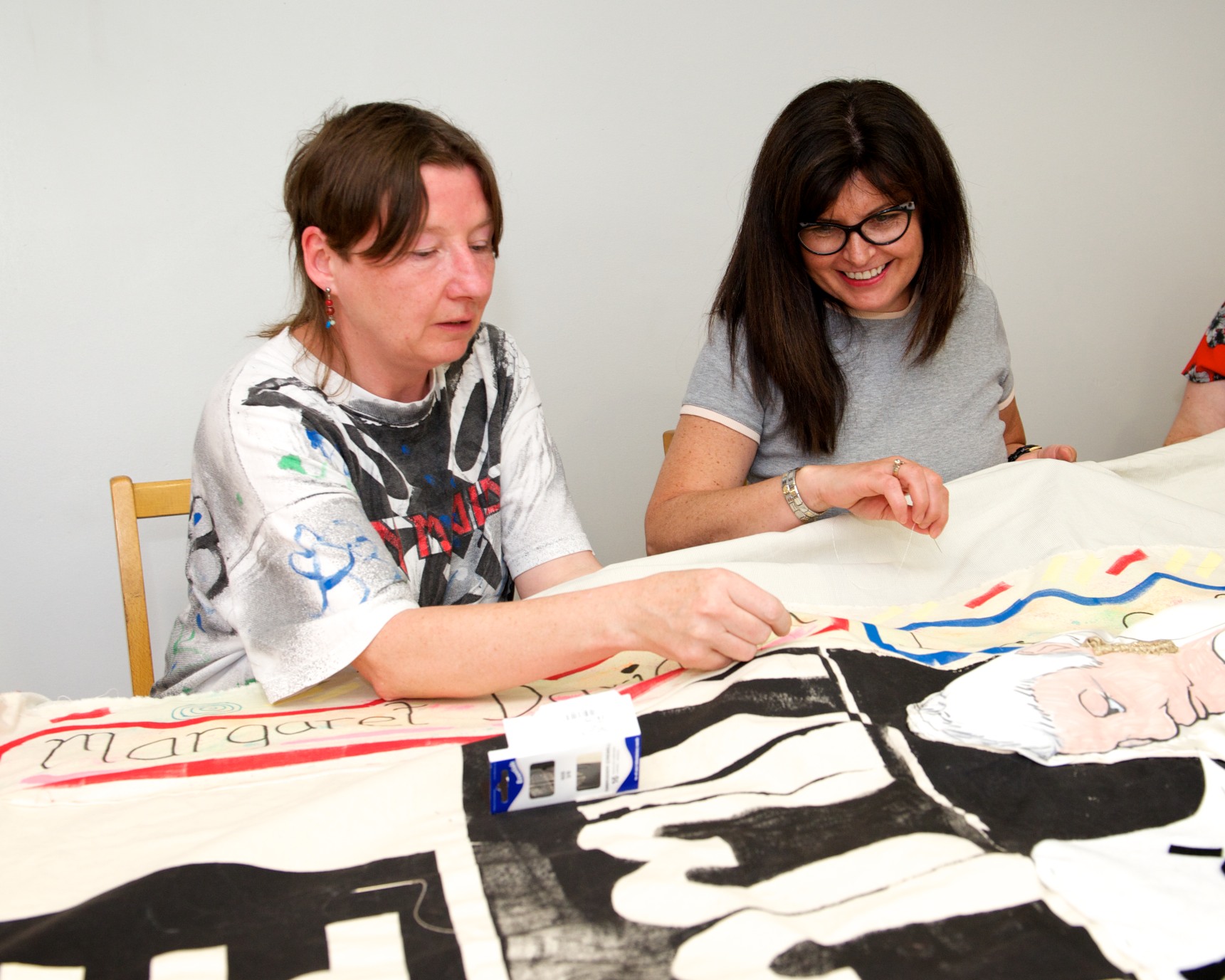 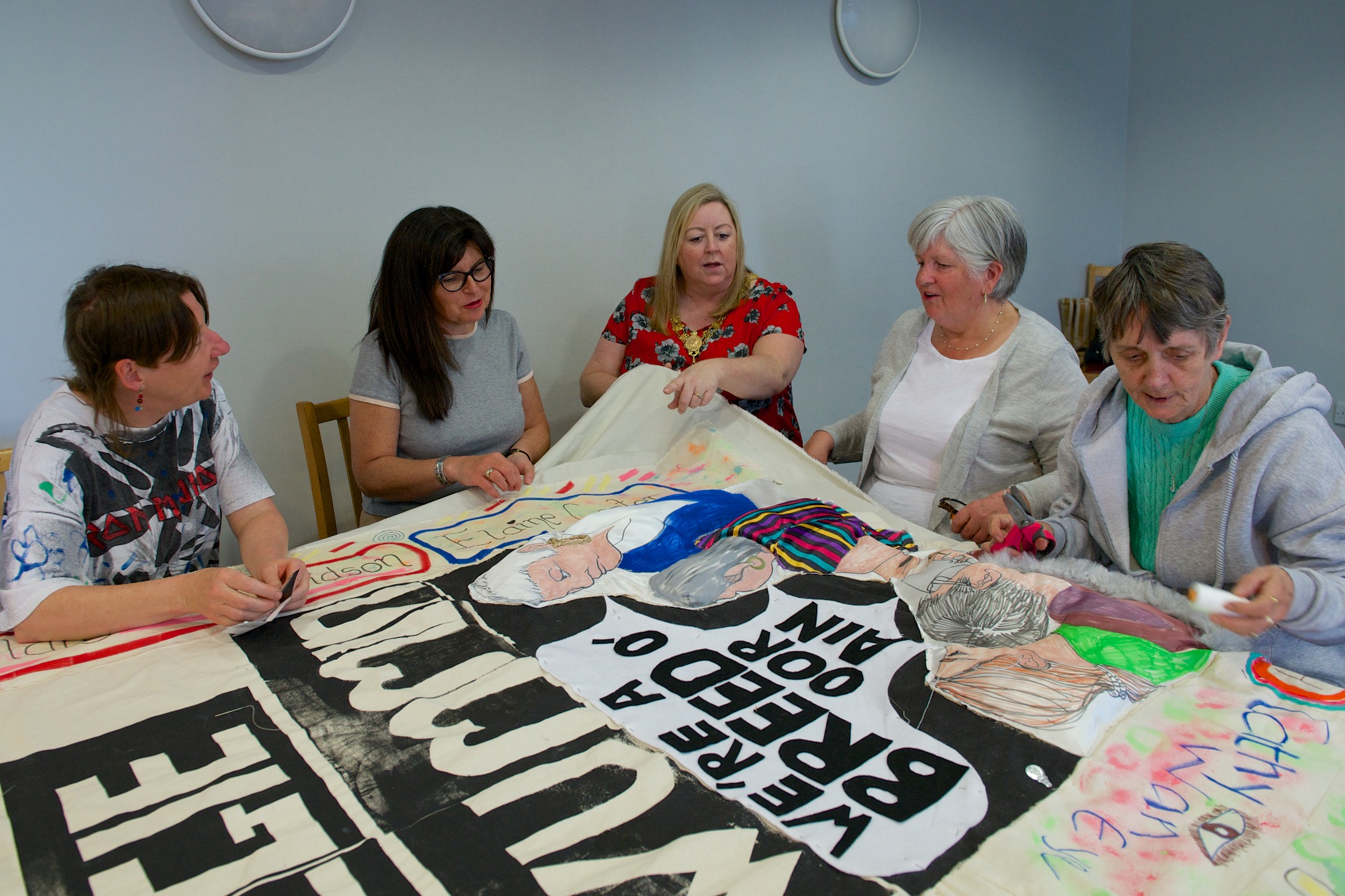 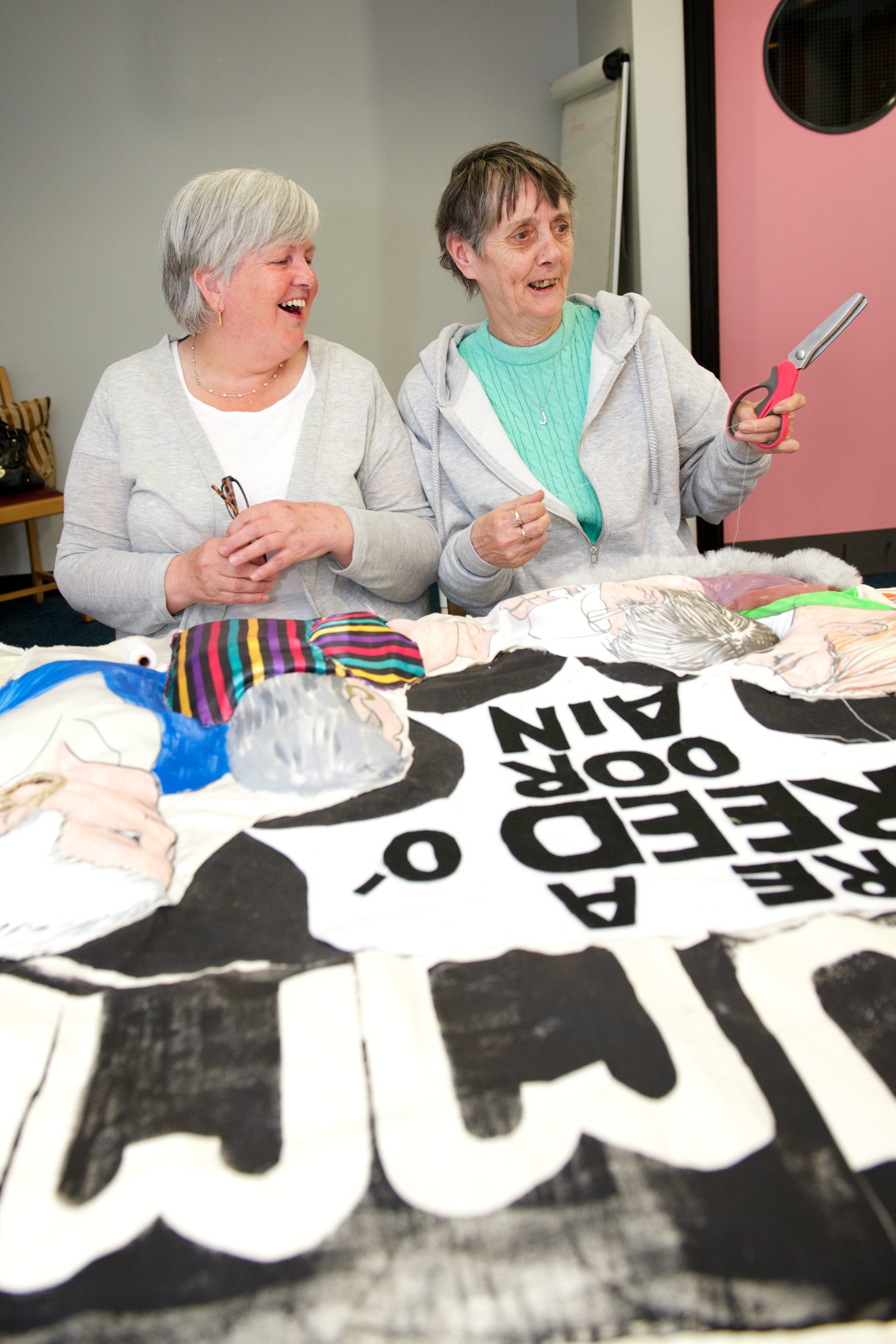 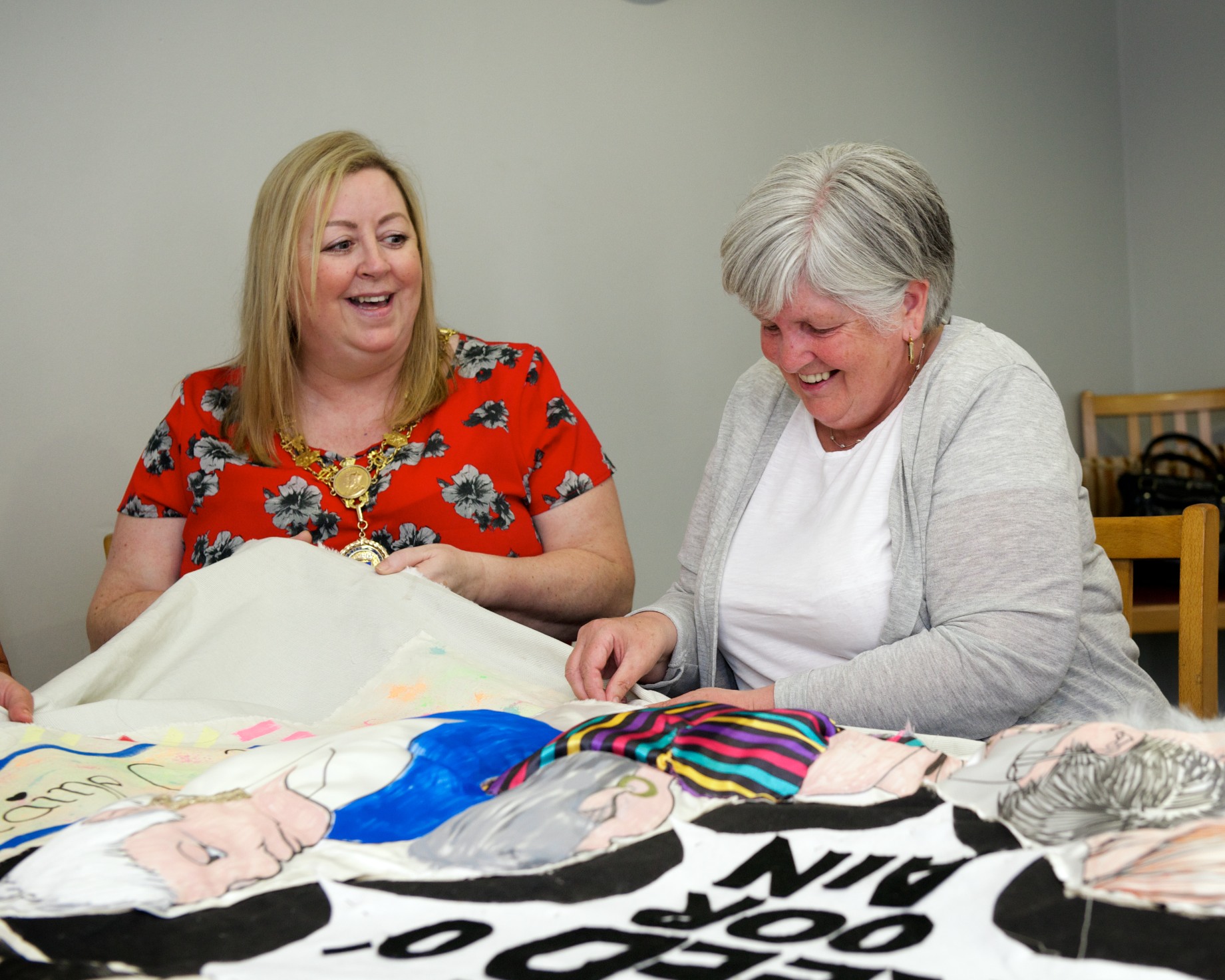 For local artist Mandy McIntosh, the banner, featuring the slogan ‘Feegie Wummin’, we’re a breed o oor ain’, celebrates the resilience and strength of Ferguslie women in the here and now.

She said “We wanted to use the word ‘Feegie’ to show the public that these women think positively about their home and are extremely proud to come from Feegie Park.”

Carol Anderson, a Community Work Assistant who works closely with the SWIFT group, says the women have embraced the cross-generational aspect of the project. “It’s been a great opportunity for the different groups to work together, sharing their knowledge and stories of the community.”

The group will be travelling to Edinburgh on Sunday 10 June to march in PROCESSIONS, and will be joined by other women from Ferguslie and across Renfrewshire who have made their own banners or who have joined in with a community banner making workshop.

Other local groups involved in banner making are STAR Project, the Disability Resource Centre and Kairos in Johnstone.

PROCESSIONS is produced by Artichoke, the UK’s largest producer of art in the public realm, as part of 14-18 NOW, the UK’s official arts programme for the First World War centenary.

Helen Marriage, CEO Artichoke said: “The 100th anniversary of the passing of legislation which made universal suffrage unstoppable is a moment both for celebration and reflection. Individuals and groups up and down the country, including The Tannahill Centre, will be at the heart of this UK-wide artwork.

“What they make and bring to their chosen procession on Sunday will form part of a unique living portrait of women today.”

Renfrewshire’s Provost Lorraine Cameron said: “I’m so pleased to see the women from Ferguslie coming together to make their banner and take part in PROCESSIONS.

“The banner truly tells the story of their community and you really get a sense of how proud the group are to come from Ferguslie Park, and so they should be.

“Recently, the Ferguslie community has come together to make changes to their environment, and it is having a very positive effect on the people who live there.

“The local people are making Ferguslie a place to be proud of once again, and the women will further that cause by taking Ferguslie to Edinburgh to display their proud banner

“I would encourage every women or girl, from all generations, to consider making their way to Edinburgh on Sunday for what promises to be a spectacular event.”

PROCESSIONS takes place on Sunday 10 June in Edinburgh. For more information and to register to attend visit www.processions.co.uk