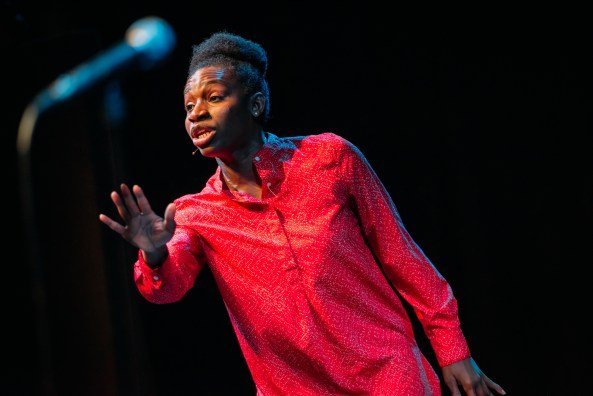 
Apphia Campbell’s incredible Fringe First Award winning show embarks on a summer UK tour, including a date at London’s Greenwich Theatre, prior to a return to the Edinburgh Fringe Festival

Woke won the coveted Scotsman Fringe First Award for its premiere season in 2017, and was highly commended by the judges of the Amnesty Freedom of Expression Award. Against stunning gospel and blues sung live, two women 42 years apart join the struggle for American civil rights: notorious Black Panther Assata Shakur and a present-day student enrolling as the Ferguson riots behind. Both challenge the American Justice system, become criminalised through political activism; and ultimately are faced with a choice to stay and fight or to flee. Created by Apphia Campbell whose previous shows include the hit Black is the Color of my Voice which has received critically acclaimed runs at the Edinburgh Fringe and on National Tour.

Apphia Campbell is a singer, playwright and actress from Florida. She received her Bachelor of Fine Arts degree in theatre performance from Florida International University and minored in Political Science. After college, she moved to New York where she pursued theatre and performed in Off-Broadway houses. In 2009, she moved to Shanghai, China where she sang blues, jazz, and pop in various venues including The Cotton Club, Park Hyatt, Le Meridian Hotel, and JZ music festivals. In 2012 she formed Play The Spotlight Theatre Company (PTS), a theatre company that focuses on new works and musical pieces. In 2013 she wrote her critically acclaimed piece, Black Is The Color Of My Voice and opened it in Shanghai to sold-out performances and rave reviews. She brought the show to the Edinburgh Festival Fringe where it sold out and has been touring the U.K and selling out in prestigious houses such as St. James Theatre, Wiltons Music Hall, and Oxford Playhouse. Her theatre credits include The Color Purple (James Harkness, WBTT Theatre), Black Is the Color Of My Voice (Edinburgh Festival and London), Holiday Hitch (PTS theatre), No Exit (Blue Lane Theatre), The Deciders (New York Fringe Festival) and Beehive (Temple Theatre). www.apphiacampbell.com

Praise for the show includes:

★★★★ ‘Campbell is the most powerful voice of this year’s fringe.’ The Scotsman

★★★★★ ‘Inspiring! A fast, exciting and engaging play that ended with most of the audience standing and applauding.’ British Theatre Guide

★★★★★ ‘Both roles are brilliantly performed by Apphia herself.’ British Theatre