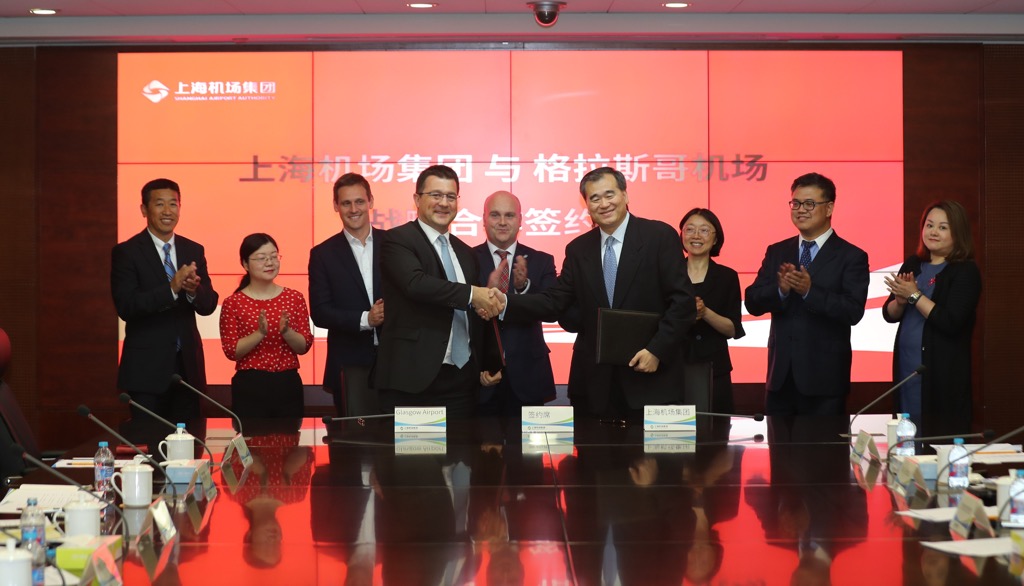 Glasgow Airport and Shanghai Airport Authority have today (Thursday, May 17) signed a partnership agreement that will see the two cities work together to jointly petition China’s main airlines to establish a direct air link in the future between the West of Scotland and the Chinese powerhouse city of Shanghai. The partnership will see the airports work together to share expertise and best practice in all aspects of airport business and exchange ideas in order to help promote tourism opportunities between the two cities while creating an attractive environment for future direct air links.

The decision to form the alliance is as a result of months of discussions involving Shanghai Airport Authority’s president and senior executives and representatives from Glasgow Airport. It was during these discussions that representatives from Glasgow shared their vision for expansion into China and the potential appeal of the airport and city as the gateway to Scotland for tourists from the Shanghai area and beyond. Commercial Director Francois Bourienne, who today signed the Memorandum of Understanding on behalf of Glasgow Airport, said: “It is a tremendous honour to be in Shanghai today to sign this partnership agreement, which marks a significant milestone in the relationship between the cities of Glasgow and Shanghai.

“This Memorandum of Understanding provides us with a unique opportunity to work alongside and share ideas with our new colleagues from Shanghai Airport Authority, which is responsible for operating the Chinese mega-city’s two main airports, handling in excess of 100 million passengers combined annually.

“The alliance will ensure both partners not only learn from one another, but work together to further enhance the growing business and tourism links between Scotland and China.

“As well as being the country’s leading long-haul airport, Glasgow is a popular gateway to Scotland for hundreds of thousands of visitors from the Asia each year. This partnership will seek to build on this.

“Through the exchange of ideas and continued collaboration, this strong partnership could bring the very real prospect of introducing a direct air link between the West of Scotland and China’s biggest city closer than it has ever been before.”

“Our aim is to work collaboratively with the management of Glasgow Airport to exchange best practices in airport operations and to jointly implement initiatives to grow visitor numbers between Glasgow, Scotland and Shanghai.”

Glasgow Chamber of Commerce Chief Executive Stuart Patrick said: “This is a fantastic coup for Glasgow Airport, and one that the Chamber will support with great vigour not least since the majority of Scotland’s Chinese community live and work in Glasgow. The airport team is to be warmly congratulated for their initiative.

“China is at the top of our international trade priority list, with Shanghai one of its most strategically important cities. There are enormous opportunities in China which has gone through three decades of extraordinary change and where the Scottish Chambers of Commerce has been active in developing connections.”

David Leven, Greater China Director for Scottish Enterprise, said: “This is a great step forward in efforts to secure deeper collaboration and another direct link between China and Scotland, and between Glasgow and Shanghai specifically, one of the world’s largest and most dynamic cities.

“China has recently become a top 5 source of inward investment for Scotland and Shanghai is an increasingly important export market for a wide range of Scottish goods and services, from financial services to education to seafood.”