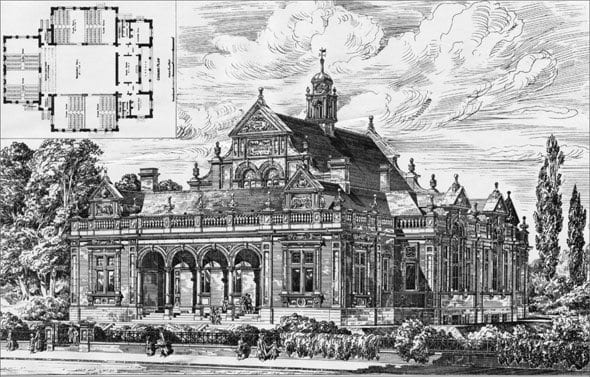 Renfrewshire councillors have refused a planning application from a developer to demolish the iconic Half Time School in Paisley, which was due to be replaced by 40 flats. The School opened in 1887 to provide education to children who worked in Ferguslie Mills, this building is a key link to Paisley’s former mill town past.  However, once the mills had gone it was later used as a nightclub but suffered damage from a fire in 1998 and has seen further deterioration of the building over the following years.
There have been a few applications to build on that site over the years and retain some of the building but the plans have not got passed the Council planning department.
Councillor John McNaughtan – seconded by Councillor Kenny MacLaren – moved against the council officers recommendations to demolish the building and found widespread support among all councillors in the council’s Communities, Housing and Planning Policy Board.  Councillor McNaughtan highlighted the importance of protecting Paisley’s architectural and social history and also called for the council to use its full powers to protect not just the Half Time School but also all historic buildings within Paisley and Renfrewshire. Councillor Kenny MacLaren, SNP – Paisley Northwest, said: “I was happy to second Cllr McNaughtan in his opposition to the demolition of this iconic building.
“We have to look at how the council can use all its powers to protect and preserve such buildings across Paisley and Renfrewshire.”
Thanks to Ricky Kelly of Renfrewshire News 24 for this article.
https://www.paisley.org.uk/wp-content/uploads/2011/08/half-timers-school.jpg 377 590 Brian McGuire https://www.paisley.org.uk/wp-content/uploads/2015/09/paisley-logo-trans.png Brian McGuire2018-03-28 18:22:342021-05-09 19:25:30Half Time School spared from demolition