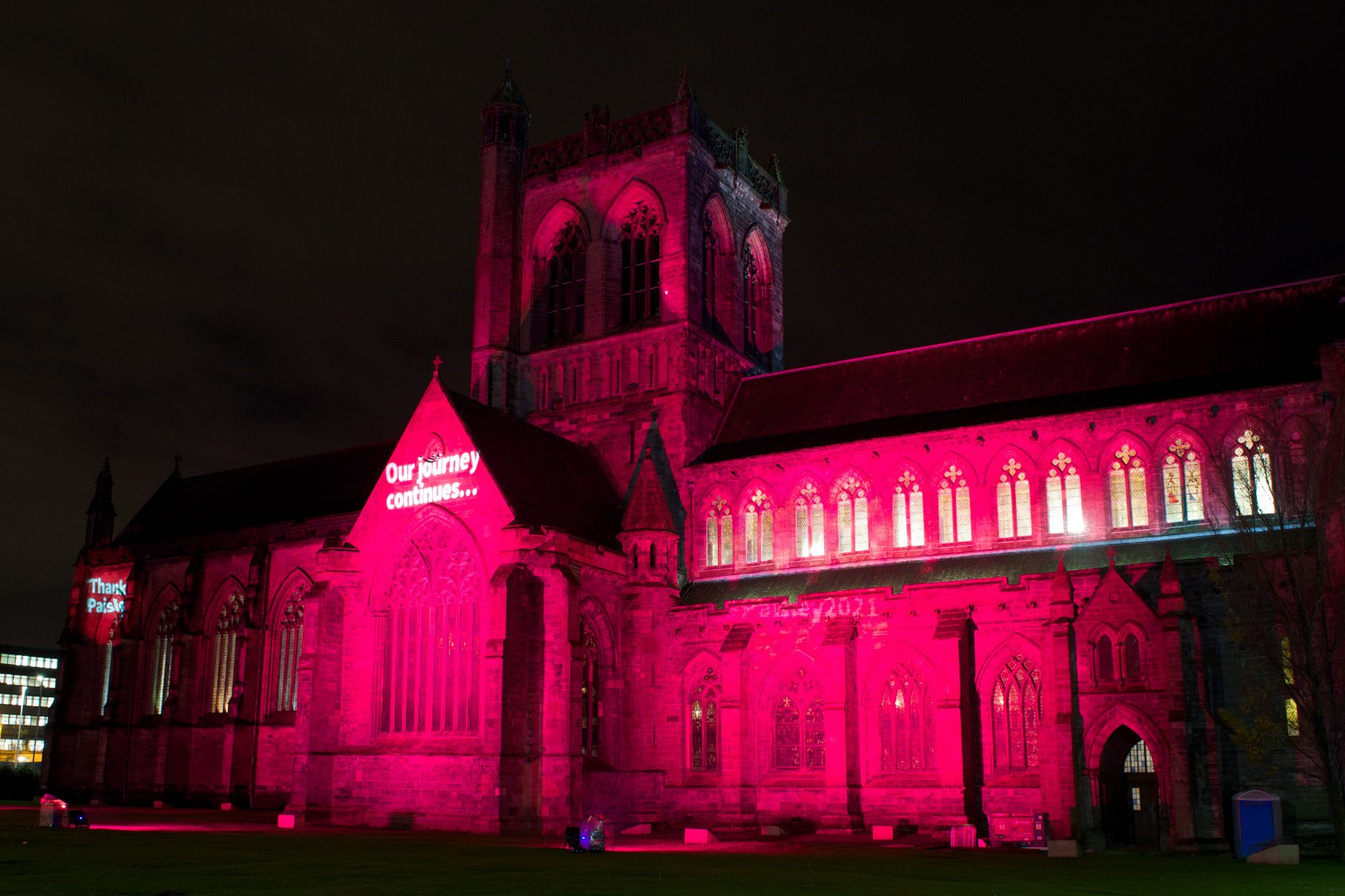 Nicola Sturgeon has said she believes Paisley’s UK City of Cuture  bid will lead to ’ lasting benefit’ for the town. Paisley Abbey and Town Hall Lit in anticipation of the City of Culture 2021 result. 7.12.17

The First Minister has led an outpouring of good wishes for the town with the close of the competition.

Paisley was the sole Scottish place on the shortlist which included Stoke-on-Trent, Sunderland, Swansea and Coventry, who took the title, announced live on BBC’s The One Show in front of a live TV audience of millions.

The contest saw Paisley involve 34,000 residents in the bid across a two year journey to change the town’s future for the better using the town’s unique culture and heritage story.
The First Minister said: “Everyone involved in the Paisley bid, from bid director Jean Cameron to the many people who have been involved
formally and informally over the last two years, can be rightly proud of their efforts.
“To gather the support of businesses, cultural and community groups, and secure the involvement of more than 30,000 people is a tremendous achievement.
“Although they will naturally be disappointed at the result, I believe the bid will lead to lasting benefits for Paisley, in terms of its profile and cultural life, and that is what we should focus on today.”
Scottish Conservative Leader Ruth Davidson also sent her best wishes to the town and praised the bid.
She said: “Everyone involved should feel a great deal of pride in the way they put forward such a positive case. It show Paisley is a place on the up.”
She added that the bid means the town will continue to be a ‘magnet for jobs and investment.
A wealth of other political and community voices also sent supportive message to the town.
Cabinet Secretary for Culture, Tourism and External Affairs, Fiona Hyslop  tweeted: “Paisley2021 and all Buddies have made us all proud of
Paisley- you have unleashed a cultural and  creative energy which will propel you on.”
Scottish Secretary of State David Mundell said: “Massive commiserations to Paisley 2021 but you’ve achieved so much during the bid and it will be a springboard for the future. You are a credit to Scotland.”
The University of Glasgow added its voice on social media to tweet: “So disappointed for neighbours Paisley 2021 missing out on being named UK City of Culture2021 – congratulations to Coventry 2021.”
Artist Matt Baker said: “Thank you Paisley 2021 you have held a mirror up to all that is brilliant about Scottish culture and utterly redefined the way the country now sees you.”
Scottish Labour Leader Richard Leonard tweeted: “Huge commiserations to all the Buddies and the Paisley 2021 team who worked so hard to be crowned City of Culture 2021.
“The passion and inspiration shown by all involved has been fantastic and you should all be proud.”
The Chief Executive of the Heritage Lottery Fund, Ros Kerslake, said: “There has been an incredible level of support and passion from across communities – a testament to how special the town is and how excited people are for its future.
“Heritage is of course a key part of what makes Paisley unique and we look forward to continuing to invest money raised by National Lottery players into projects across the town.”
Bob Grant, Chief Executive of Renfrewshire Chamber of Commerce, said: “The outcome is of course disappointing but we are still in a great position compared to where we were two years ago. Our public and private sector partnerships are far stronger and there’s so much goodwill and momentum created by the bidding process.  This is a great opportunity to capitalise on that enthusiasm and renewed confidence for the good of the visitor economy and tourism, as well as the town centre economy.
“The key thing is to maximise that opportunity and take advantage of where we’re at now through the bidding process.”
Sharon McAulay from the Paisley-based STAR Project said: “What an amazing journey we’ve had! Yes we’re gutted we didn’t win but we’re also proud of what we’ve achieved over the past two years. Paisley’s journey is far from over. We’ll continue to be brilliant, creative, and full of potential and our plans to transform our town will also continue. Paisley has great things ahead and my belief in what we can achieve together remains steadfast and true. “
12/12/2017/by Brian McGuire
https://www.paisley.org.uk/wp-content/uploads/2017/12/DSC_2032.jpg 1232 1849 Brian McGuire https://www.paisley.org.uk/wp-content/uploads/2015/09/paisley-logo-trans.png Brian McGuire2017-12-12 13:23:352017-12-12 13:23:35First Minister leads messages of goodwill to Paisley as City of Culture competition comes to an end

CHIVAS BROTHERS DONATES £13,000 TO SOCIAL BITE’S SLEEP IN THE PARK EVEN...
Scroll to top