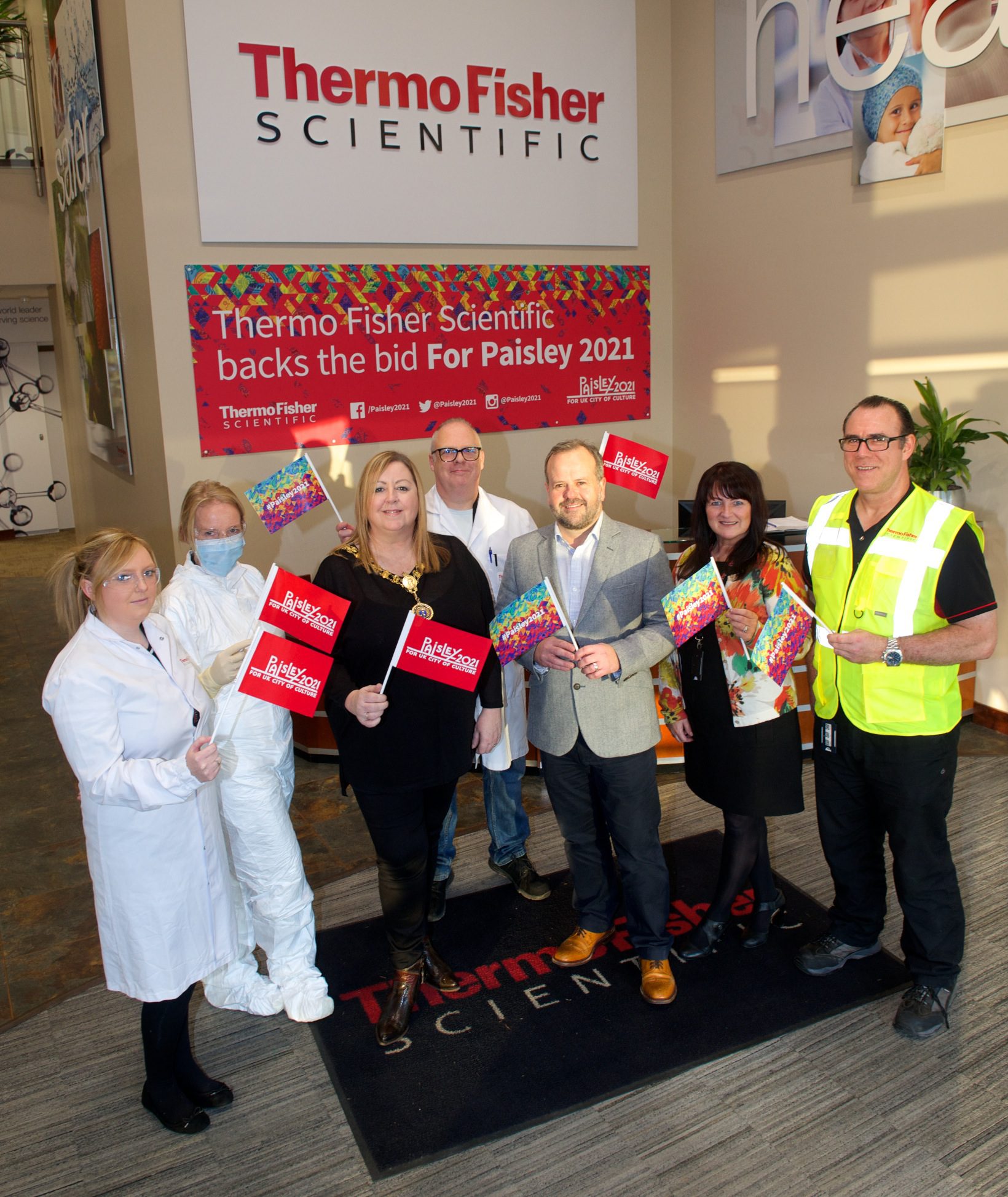 One of the world’s leading life science companies has backed Paisley’s bid to be named UK City of Culture 2021. Thermo Fisher Scientific, which employs more than 700 people at its Renfrewshire base, has pledged financial backing if Paisley takes title.

The town is bidding as part of wider plans to use its unique cultural and heritage story to transform its future. Renfrewshire Provost Lorraine Cameron visited the latest international firm to back the town’s ambitions and said: “As we approach a decision on the UK City of Culture 2021, it’s good to be able to express our thanks to businesses, some with global links, who have put their support behind us.

“The scale of the commitment of the business community, including international firms such as Thermo Fisher Scientific, demonstrates how they have embraced the huge opportunity to boost the area’s economy. “They’ve also welcomed the idea of working with culture and cultural organisations.”

The life sciences giant has global revenues topping £15 billion and has around 65,000 employees worldwide.

Its base in Renfrewshire has a history stretching back more than four decades and it has grown and expanded its manufacturing footprint and workforce in recent times.

It opened a £14 million facility at the Inchinnan plant in 2015, where novel technology is used to make products for drugs which treat influenza and other diseases.

Jim Carswell, Operations Director & Inchinnan Site Leader, said: “Thermo Fisher Scientific has had a presence in the area for more than 45 years and many of our employees are local to the area.

“We are delighted to throw our support behind the Paisley bid to be the UK City of Culture in 2021 and we wish the team every success ahead of the announcement next month.”

More than 200 companies have shown their support for Paisley’s bid, while a further 13 private sector organisations have committed over quarter of  a million pounds if the town is successful.

Thermo Fisher Scientific joins a list of sponsors including international drinks giant Diageo, which demonstrated its support by creating a limited edition of Johnnie Walker whisky.

Hillington-based haulage firm Gordon Leslie Group branded a truck that has travelled the length breadth of the UK, emblazoned with the Paisley  2021 logo.

The world’s largest industrial thread manufacturer Coats, which started life in the town, has also backed the bid, while Glasgow Airport marked its formal endorsement with Paisley themed art work at the check in area.

They are joined by Chivas Brothers and other businesses with local roots, Mac Asphalt, Morrison Construction, Clark Contracts  and the Scottish Leather Group.

WH Malcolm wrapped the backs of two trailers with Paisley 2021  branding to show its support, while intu Braehead, held a Paisley 2021 day with local musicians and youth groups.

Renfrewshire Chamber of Commerce and Paisley First, which represent more than 900 businesses between them, have also thrown their weight behind the town’s title ambitions.

A decision on the UK City of Culture 2021 title is expected from the Department for Digital, Culture, Media and Sport which organised the competition, next month.