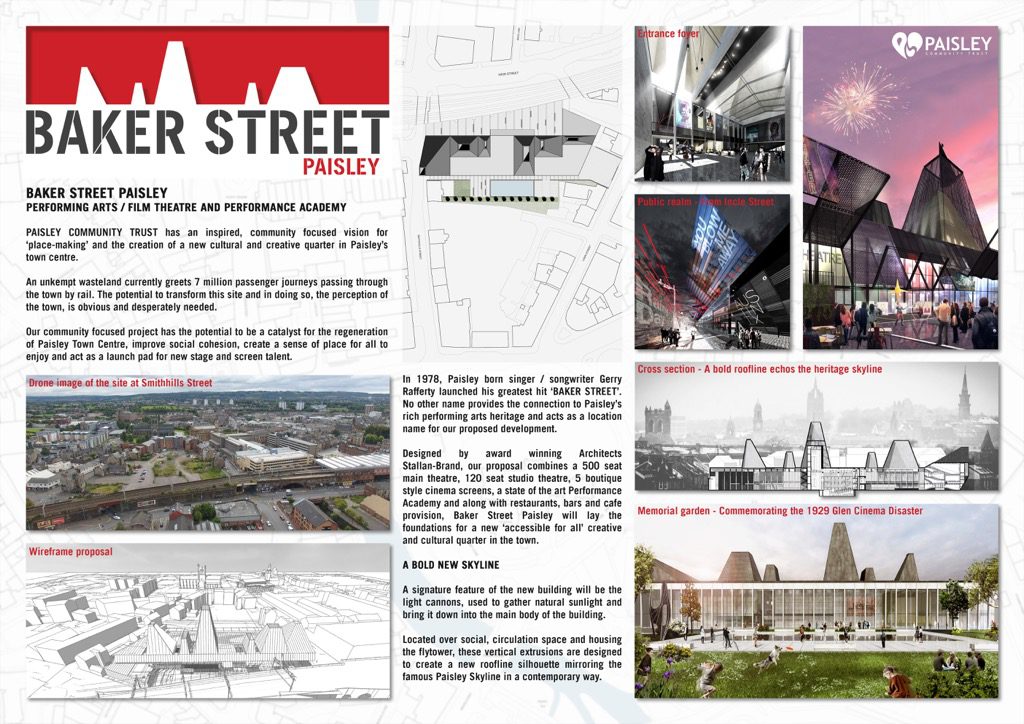 Paisley Community Trust are delighted to announce Baker Street Paisley has been announced on the shortlist of Scotland’s Towns: FutureTown design competition. Organised by Scotland’s Towns Partnership (STP), the national agency and ‘go to’ body for towns north of the border, shortlisted entries will go on public display at Paisley Town Hall on November 21st as part of the annual Scotland’s Towns conference.

Members of the public will be able to vote for Baker Street Paisley TO WIN via an online public vote held during Scotland’s Towns Week, 20 – 26 November 2017. And we’re now asking for your support, for the whole COMMUNITY to back PCT to WIN and back Paisley to WIN. (Look out for more news on how to vote over the next few days.)

Phil Prentice, chief officer at Scotland’s Towns Partnership said: “I’d like to congratulate all shortlisted entries for the initiative and forward-thinking demonstrated regarding the future of their towns. “While Scotland’s towns continue to be impacted by economic, social and technological changes, the applications to this competition show how collaboration and innovation can help communities to take advantage of opportunities and make the most of everything our diverse towns have to offer”. “I wish each applicant the very best in the competition and in making their town vision a reality.”

Paisley Community Trust recently revealed their plans and vision for a new cultural and creative quarter in Paisley on the site to the rear of the old Arnott’s department store.

An unkempt wasteland currently greets 7 million passenger journeys passing through the town by rail. The potential to transform this site and in doing so the perception of the town is obvious and desperately needed. Plans feature an amazing Performing Arts/ Film Theatre and Performance Academy designed by award winning Architects Stallan-Brand.

In 1978, Paisley born singer-song writer Gerry Rafferty launched his greatest hit to date; ‘BAKER STREET’. No other name provides the connection to Paisley’s rich performing arts heritage and acts as a location name for the proposed development.

Baker Street Paisley is a COMMUNITY led proposal with potential to be a catalyst for the regeneration of Paisley Town Centre, improve social cohesion and create a sense of place for all to enjoy. It can become more than just a new building for Paisley and will become a transformational place and destination for the arts, culture, entertainment and education.

“We’re really pleased to be shortlisted and intend to go all out to WIN. This competition is a fantastic opportunity to set Paisley off on WINNING ways, to continue the feel-good factor and for Paisley to get into the WINNING habit.

“Let’s turn our community project into an unstoppable juggernaut towards the finishing line for Paisley to WIN the UK City of Culture Title in 2021. Let’s get everyone supporting Paisley Community Trust and Baker Street Paisley, let’s get everyone voting for Paisley to WIN. That’s what this is all about – making Paisley feel good and become a better place. It’s a great habit to form”