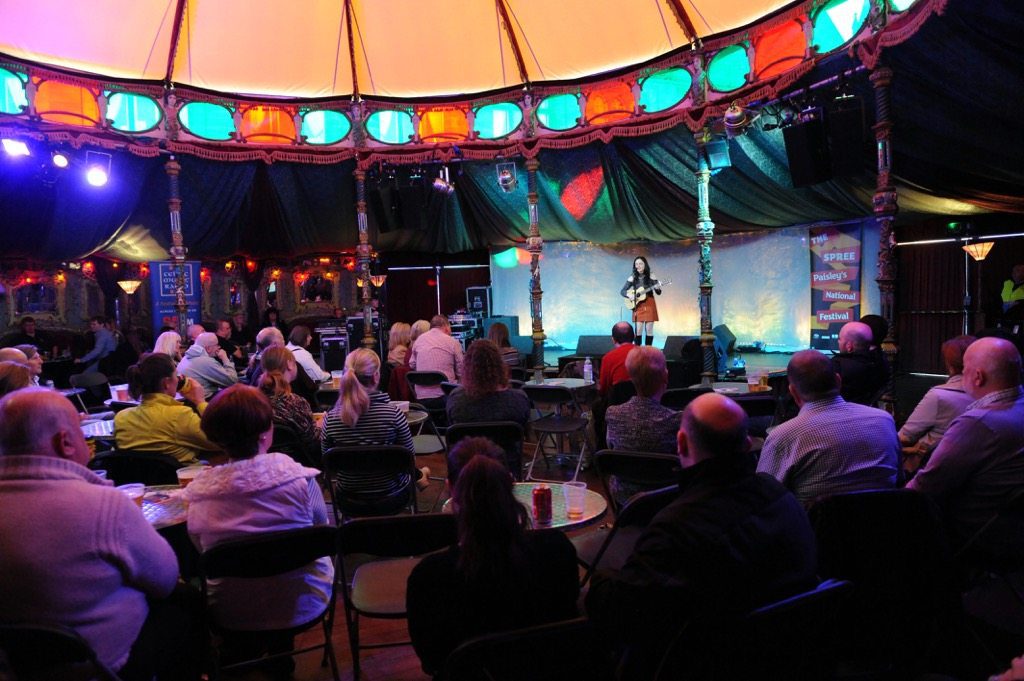 While he was alive, the late Paisley music legend Danny Kyle was a great champion of new talent.

His memory and influence lives on with the Danny Kyle Open Stage at this year’s Spree festival, which offers up and coming musicians the chance to shine. The free event at the Spiegeltent throughout the 12 day Paisley extravaganza will be broadcast live on Celtic Music Radio 95FM on Liz Clark’s show ‘Travels with my Auntie Liz.’

The top three acts from a total of 15 will compete in a final showcase on Sunday 22nd, with the successful acts offered opportunities including a supporting live stage slot with a more established act and studio time.

Liz Clark, who was a close friend of Danny’s before his death in 1998, said competition was fierce to perform on the stage, first made famous at Glasgow’s Celtic Connections festival.

She said: “The acts all get a twenty minute slot to strut their stuff. To get on stage people have to be out there gigging and trying to get their foot on the ladder.

“Danny always encouraged people and believed in everyone being given a chance, When he was alive he used to recommend up and coming acts to folk clubs festivals.

“It’s a free event and is always great fun.”

Danny’s son Rikki Kyle says his dad would be delighted with the legacy he left.

He said: “He used to run a ‘Giez a Break’ club at festivals to give new acts a leg up and it’s something he was very proud of. He would love the fact that the open stage is still doing that in his name in his home town. It’s a great legacy to leave.”

The first event runs from 5-6pm on Saturday 14th, followed by Monday 16th-Wedenesday 18th with the final showcase on Sunday 22nd.

Some of the acts will also take part in The Spree for All Festival Club at The Old Swan in Paisley town centre. The open stage event there will run for the duration of the festival and will feature solo acts, jamming sessions and poetry readings with details found daily on the venue’s Facebook page.

This year’s event features some of the biggest names in the Scottish worlds of entertainment, music and comedy, including a sold-out homecoming show from Paolo Nutini.

Other acts on the bill include indie rockers Frightened Rabbit, and singer songwriter  Dougie MacLean .

The Spree is taking place in partnership with local bar Burger and Keg and Fosters, who will be programming additional acts in the Burger and Keg Live Tent in Abbey Close during the festival. More info at burgerandkeg.co.uk