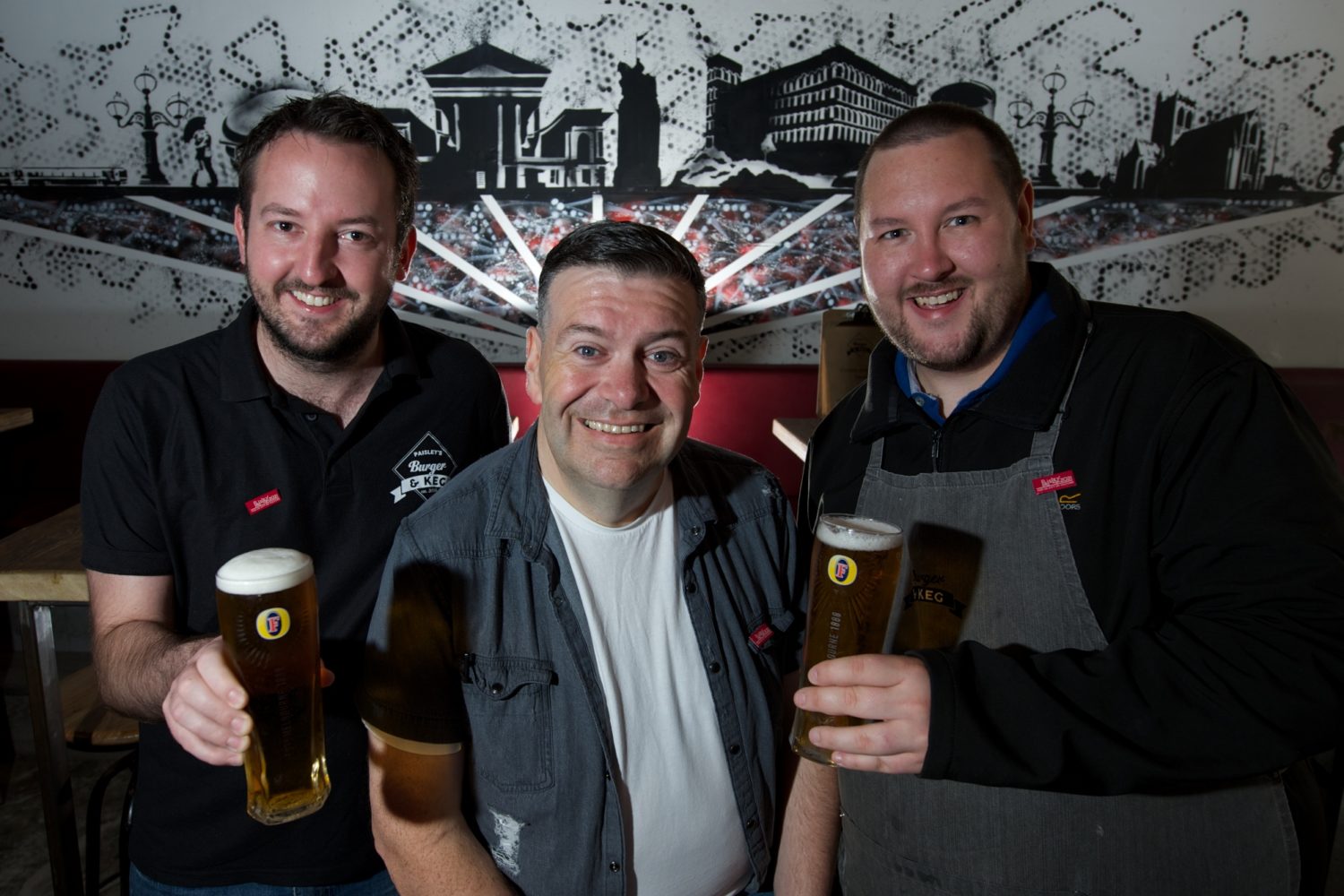 Paisley’s annual Spree festival is being served up with a side-order of burgers, beer and banter – with local bar Burger and Keg bringing some of Scotland’s top comedians to the town.

RDC Burger and Keg 11.9.17
Burger and Keg in Gilmour St
photo with bar owners Gary and Trevor with Tom Urie, who will be appearing in their tent during this year’s Spree.

The Gilmour Street venue has teamed up with Fosters to stage a Burger and Keg Live Tent in Abbey Close for the first nine days of the annual festival, on between 13 and 24 October.

The 150-capacity venue will host top names including Paisley’s very own Tom Urie – who will appear alongside fellow comedian Janey Godley on Wednesday 18 October.

RDC Burger and Keg 11.9.17
Burger and Keg in Gilmour St
photo with bar owners Gary and Trevor with Tom Urie, who will be appearing in their tent during this year’s Spree.

The Burger and Keg Live Tent will also be open as an outside bar for fans attending the main Spree shows in Paisley Abbey, including eagerly-anticipated and sold-out gigs from Paisley’s Paolo Nutini and Frightened Rabbit with the Royal Scottish National Orchestra.

You can see the full list of shows and buy tickets at www.burgerandkeg.co.uk

The Spree festival is now in its sixth year and taking place as part of the push towards Paisley’s bid to be UK City of Culture 2021.

Burger and Keg will also run the bar inside the Spiegeltent in County Square, where the bulk of the Spree action will take place, as well as an additional outdoor Fosters Bar tent in the square.

And the pub itself – stationed handily between the Spiegeltent and the festival box office in the InCube shop in Gilmour Street – will be open for business and serving food until 9.30pm and drink until midnight (1am on Friday and Saturday) during the 12-day festival.

Singer and actor Tom Urie – who starred in the BBC’s Proms and the Park event at the weekend with a stirring rendition of opera classic Nessun Dorma – popped into Burger and Keg to meet owners Trevor Mills and Gary McCaw, who also runs the town’s Bianco and Nero cafe and function room.

Tom said: “I am looking forward to performing in my home town in the Burger and Keg Live Tent during The Spree. I’ll be there with my pal Janey Godley for a night of music and comedy…and I look forward to seeing you then!”

Trevor added: “The Spree festival is great for Paisley – it and other events bring footfall into the town which benefits us and other businesses, and if we win UK City of Culture 2021 that will move to a totally different level.

“So we are delighted to be involved in The Spree and delighted to add to the festival atmosphere around the town with the shows in the Burger and Keg Live Tent.

“We have attracted some outstanding performers with national profile and tickets are on sale now so please check out the programme and join us in October.”

The Spree is supported by EventScotland and the British Council. The full programme and tickets are at www.thespree.co.uk.

Glasgow News? Daily Updates part of our network
House Prices in Scotland Pull Ahead from Rest of the UK

Pitch Up for St Vincent’s Hospice
Scroll to top