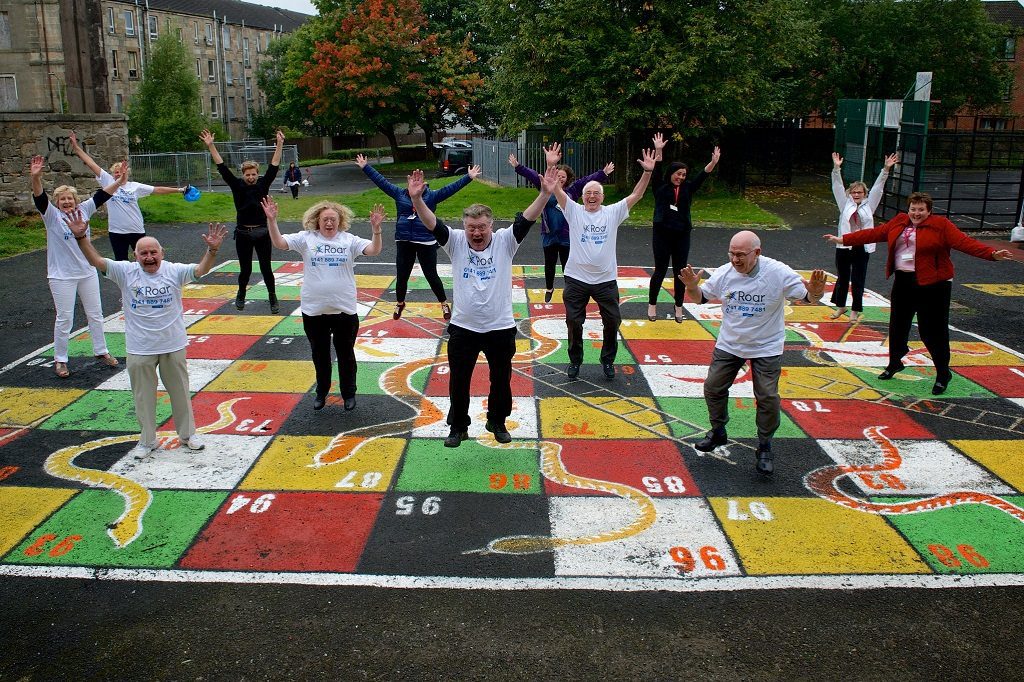 Paisley residents took part in a giant game of snakes and ladders painted onto some unused ground after it was unveiled at a special open day.

Renfrewshire Council’s unpaid work team created the playful artwork in Underwood Lane, next to the Basketball Court, as an innovative way for people undertaking Community Payback Orders to give something back to the community.

Reaching Older Adults in Renfrewshire (ROAR) paid for the paint and jumped for joy to see the artwork lighten up the lane.

Using creative projects helps people convicted of offences to feel invested in their community, supporting them to change behaviours.

The event also featured hand-crafted items created by the women’s unpaid work squad as well as snacks and juice for kids.

Councillor Marie McGurk, Convener of Renfrewshire Council’s Communities, Housing and Planning Policy Board, said: “Unpaid work has benefits for everyone in the community. The work helps people with a history of offending to give something back to the community and the community benefit from something that improves the area.

“Today, and in the future, kids will have lots of fun playing snakes and ladders, but longer term those who have been involved in its creation will see the positive outcomes of their efforts and help them to reintegrate as law abiding citizens.”

Nicola Hanssen, ROAR General Manager, said: “We enjoy a good relationship with the CPO teams. They help us maintain our gardens.

“We supplied the paint for the snakes and ladders board and paid for it with a donation we received.

“It is nice and bright and you do see people taking their children to play on it.”

Paisley 2021 set to take over intu Braehead
Scroll to top