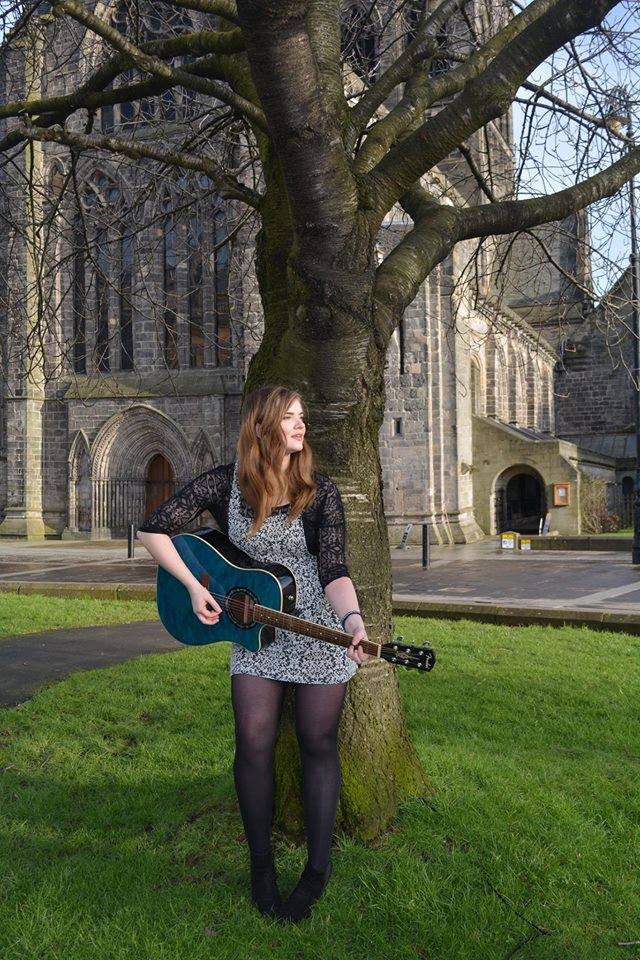 Local Buddies and organisations are being encouraged to take part in the filming of a music video in the town for an up and coming 17-year-old musician.

Lisa Kowalski has been awarded funding from Renfrewshire’s Culture Heritage and Events Fund to film a music video for the Paisley themed song “Hearts of Gold” which is about Lisa’s experience of busking on Paisley High Street since the age of 14. The catchy chorus describes how much she cherishes the support she has received from local people:

“And the streets are paved with hearts of gold,

As I take in this moment and think,

I don’t wanna be anywhere else”

Lisa said: “I love Hearts of Gold because it tells such a personal story and reflects how much I love Paisley. I wasn’t the happiest of 14 year olds and it gave me such a confidence boost to know people appreciated my music and that it could cheer up their Saturday morning for a while.

“As I have progressed on my musical journey, the support I have received from local people, businesses and the Paisley 2021 Campaign has been amazing. I want the video to show how grateful I am and what a great place Paisley is.”

The video will be filmed on the High Street and around some of Paisley’s landmarks, referencing the song’s mention of the town’s impressive architecture.  Lisa has also lined up St Mirren FC, not least their mascot the Paisley Panda, to get involved as the song also mentions football fans on their way to the game. Steven Thomson, Creative Producer for Paisley 2021, said: “Paisley has always punched above its weight in terms of musical talent and it’s great to see this tradition continue with Lisa.

“She is a gifted musician and we are very happy to be in the position to work with her to achieve her dream through helping fund the creation of her first music video.”

Hearts of Gold is a track on Lisa’s recently released debut EP Free Spirits, which also received funding from Paisley 2021 and has enabled Lisa to represent the Paisley music scene on many radio stations, Live at Five on STV2, the Scottish Sun Live Sessions, music review sites and webzines and even in the magazine of the Scottish American foundation.  The title track Free Spirits has also been included in a UK-wide folk compilation album and the EP is available on Spotify, Itunes and Google Play.

Lisa is working on the video production with Create Paisley, the local youth arts organisation which has helped her in many ways since she started out. Filming will commence in the second half of September with a view to releasing the video at the end of October, allowing it to be used to promote the town and its music before the final decision is made about the City of Culture winner.

Alan Clark from Create Paisley said: ‘We’re thrilled to have been asked to work on this film with Lisa and in partnership with Paisley 2021. It’s been so great to work with Lisa over the last couple of years in our songwriting programmes, recording and events. At Create, we love creativity and are dedicated to empowering young people in Paisley to reach their potential. We’re excited that this project will both highlight the great talent that Lisa has but also showcase Paisley, our bid for city of culture and the thriving youth arts scene in the town.’

To express an interest in taking part in the video when filming commences on the High Street and to be part of a celebration of Paisley’s Hearts of Gold, please contact Lisa via her music page https://www.facebook.com/lisakowalskimusic/ or e mail lkowalskimusic@gmail.com.