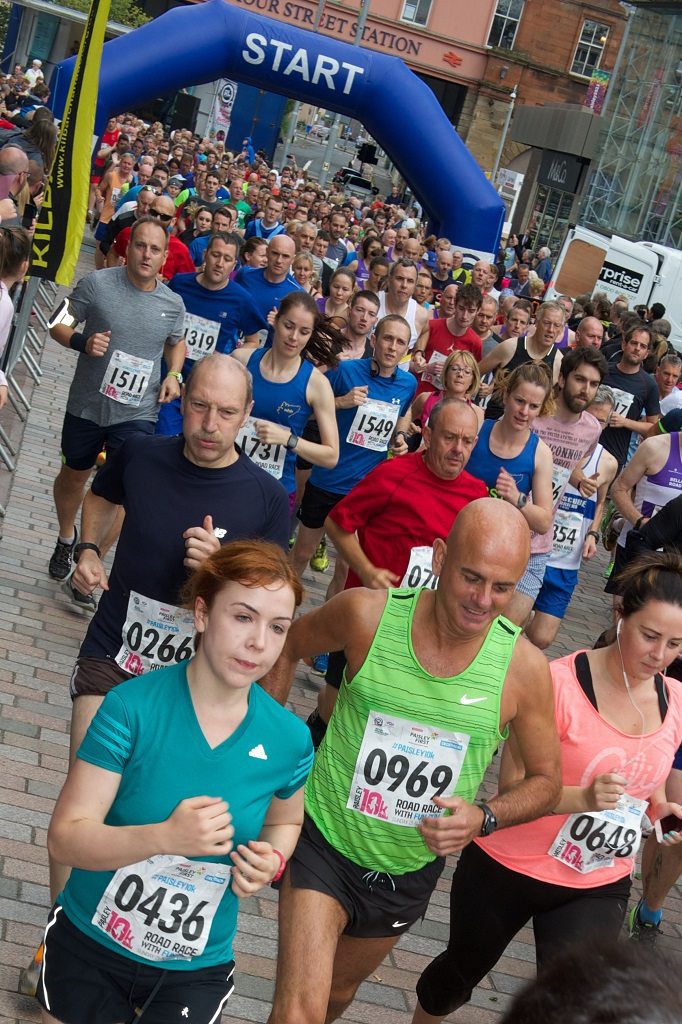 A RECORD number of entrants will take part in this year’s Paisley 10k and Fun Run.

With just over a week to go until the popular event is held on Sunday, August 20, organisers Renfrewshire Leisure report that 2,944 people have already signed up to take part. There are 1869 racing in the 10k and 1075 taking part in the Fun Run.

At the same point last year, 2373 had signed up for the event, with 1596 for the 10k and 777 for the Fun Run.
And organisers are confident by the time race day comes along, there will well over 3000 people pounding the streets of Paisley town centre as there is still time to enter.

The Paisley 10k and Fun Run, which sets off shortly afterwards, is sponsored by sports and outdoors retailer, Decathlon and for the third year the official charity partner is Macmillan Cancer Support.

Many of the fun runners are being sponsored to raise much-needed funds for local charities, clubs and good causes with several entire football teams of youngsters taking part.

This year’s Paisley 10k race has £1200 of prize money and trophies up for grabs and for the fun runners, there are prizes for the first three boys and girls from primary and secondary schools over the finishing line.

The deadline for signing up is noon on Friday, August 18.

Chief executive of Renfrewshire Leisure, Joyce McKellar said: “If you’ll pardon the pun, we’ve had a fantastic run of entries to this year’s Paisley 10k and Fun Run!

“The 10k has grown to become a popular race in the calendar of events for the more serious runners and more and more people are staying fit and healthy by training for the Fun Run.

“Even if people aren’t taking part – and there’s still time to enter – I’d encourage everyone to come down and support their families and friends who are running.

“It’s an exciting day out for everyone and as well as the races, there will be lots going on in the town for people of all ages to enjoy.”