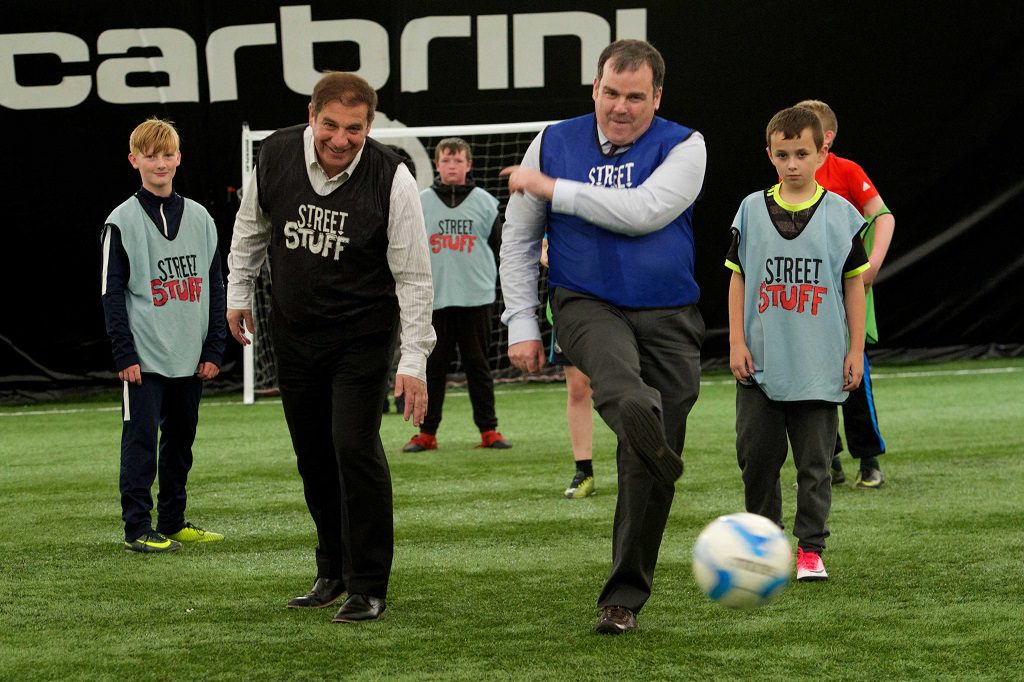 While there, Street Stuff kids challenged him to a game of football, to learn some dance moves and to play a game on the interactive facilities available on the new youth buses.

Street Stuff volunteer, Jay Gibson, aged 15, said: “I love coming along to the Street Stuff summer camps because I can have fun with my friends. There are so many activities that I can join in, which is great.”

More than 43,000 young people took part in Street Stuff activities last year, 13 per cent more than the previous year, with a variety of activities for young people to get involved in, such as football, dance, cheerleading, clubbercise, gaming, DJ workshops, filming and much more.

Over the last 12 months, Renfrewshire Council has invested in five Street Stuff youth buses as part of a range of initiatives aimed at supporting those who experience the most barriers towards reaching their full potential.

The buses were designed inside and out by young people attending the Street Stuff programme and now include ipads, macbooks, DJ decks and a fresh vibrant exterior.

Since the programme began in 2009, Renfrewshire has reduced youth disorder and anti-social behaviour by 75 per cent over the first five years, and a 42 per cent increase in the number of young people attending the programme over the last three years.

Council Leader Iain Nicolson said: “Street Stuff has made a real impact to the lives of young people and communities across Renfrewshire, and that is why I wanted to visit the summer camps to see for myself what makes it so successful.

“The programme offers a wide range of activities that young people have said they enjoy, and those who come along to the summer camps also receive a healthy meal as part of a range of measures supporting young people to reach their full potential regardless of their background.

“There has been a dramatic fall in youth crime and anti-social behaviour since the programme began in 2009, and at the same time a significant rise in the number of young people taking part, with more than 43,000 participants taking part last year.

“Street Stuff is about inclusiveness, engaging with young people, and promoting education, volunteering and employment. That philosophy continues in how we work with young people, with the new youth buses having been designed by young people for young people and kitted out with interactive facilities that they want, including DJ decks, filming equipment, iPads and games consoles.”

The summer programme runs on Mondays, Wednesdays and Fridays, 1-5pm at St Mirren Football Club and at venues across Renfrewshire Monday to Friday, 1-5pm.

For full details of the summer programme, visit renfrewshire.gov.uk/streetstuff.