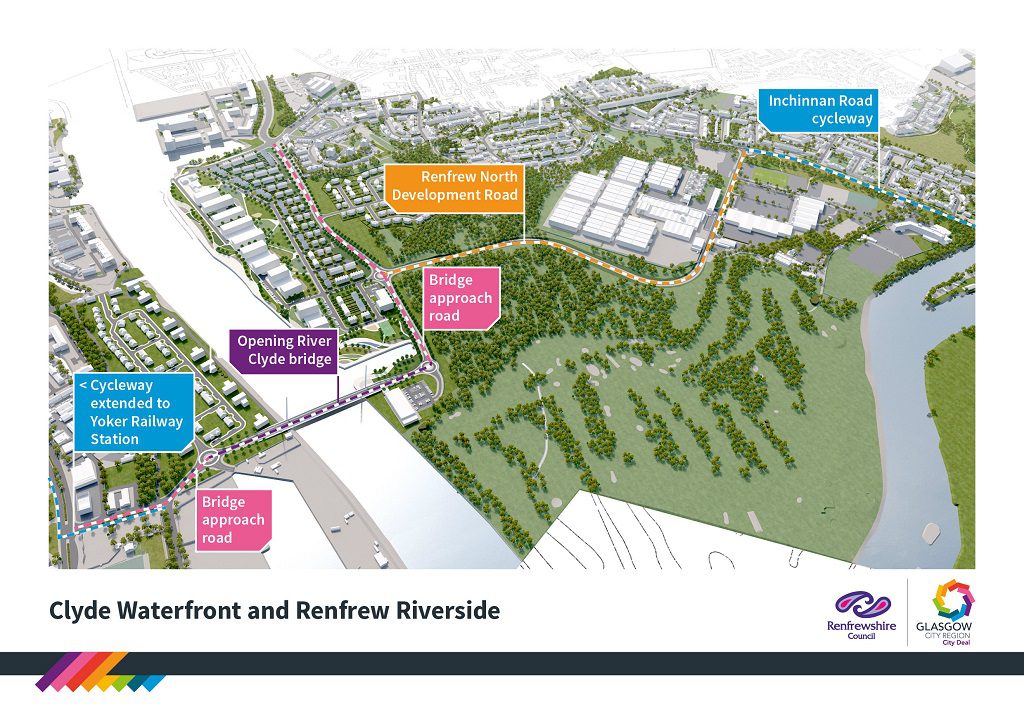 Authorities in Renfrewshire, West Dunbartonshire and Glasgow will consider the details of the £90.7million Clyde Waterfront and Renfrew Riverside project, which aims to regenerate the Clyde Waterfront as an attractive area supporting residential, industrial, business, retail and leisure opportunities.

It includes construction of the only opening road bridge across the River Clyde and new roads and cycle routes to better link the communities of Renfrew with Yoker and Clydebank.

Construction of a new bridge over the White Cart, realignment of Abbotsinch Road, and new cycle routes form the project proposals to improve connections between the existing Westway, Inchinnan and Airport business parks.

It will also facilitate the creation of a world class business and commercial location in the heart of Renfrewshire, connected by air, sea and land.

If approved, work on both projects is expected to start on site in 2018 with construction completed in 2020.

Extensive engagement with more than 2000 people has signalled strong public support for the projects, with feedback surveys showing 90 per cent backing for the Clyde Waterfront and Renfrew Riverside project, while 94 per cent of respondents are behind the Glasgow Airport Investment Area project.

The projects are funded through the £1.13billion Glasgow City Region City Deal, an agreement between the UK Government, Scottish Government and eight local authorities across the Glasgow City Region to deliver improved infrastructure, create new jobs, tackle unemployment and drive innovation and growth.

“Around 1400 jobs are expected during the construction period and a further 11,000 permanent jobs could be created through existing business expansion and new businesses being attracted to the area as a result of the City Deal infrastructure investment.

“I am very excited at the potential of the Glasgow Airport Investment Area to bring highly skilled jobs to the area. The signs are already there – the First Minister recently announced that an £8.9million specialist centre to develop new manufacturing processes for lightweight materials for the aerospace and automotive industries will be established here in Renfrewshire.

“It has been encouraging to see the public are firmly behind these projects and I look forward to seeing the work get underway. These are key projects in the Glasgow City Region City Deal, which has the potential to unlock £3.3billion in private sector investment benefitting the whole region.”