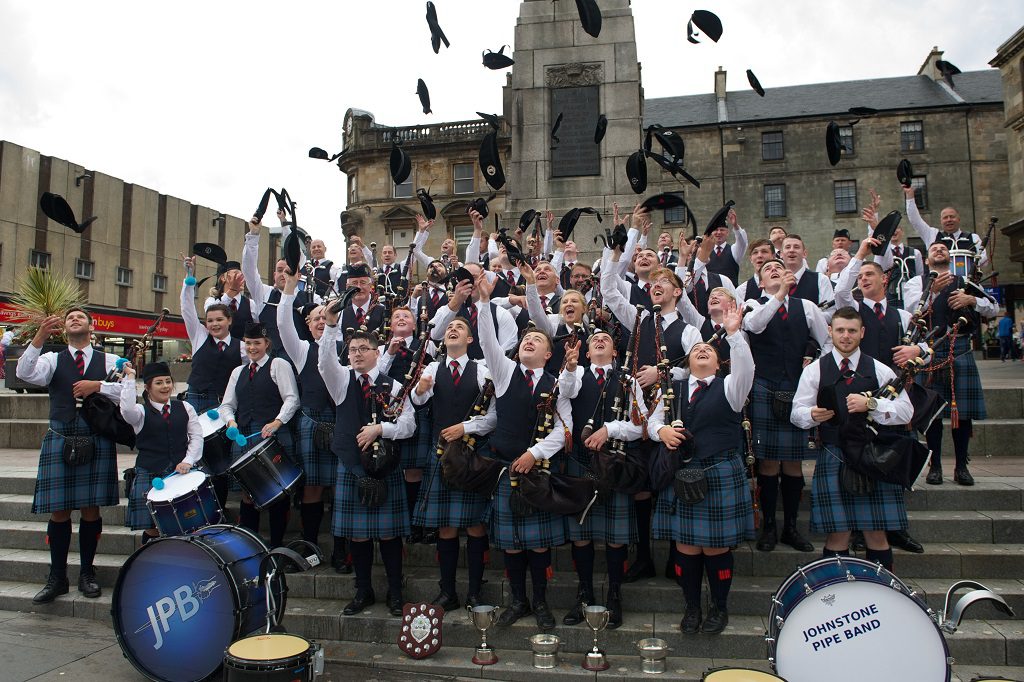 The event, which is in its eighth year, will see pipers and drummers from across Scotland fill the town with the sound of bagpipes and the beat of drums.

Thousands are expected to watch the bands as they parade from High Street to the main competition arena in County Square. There, judges from the Royal Scottish Pipe Band Association – West of Scotland branch will judge the bands on their performances across the various grades. Spectators will be able to enjoy the performances during the day, with the March Past at 4.30pm.

Bands compete from 10.30am and then the massed bands will gather at 5.30pm for the prize-giving ceremony with the Chieftain.

The competition, organised by the Royal Scottish Pipe Band Association (RSPBA) and Renfrewshire Council, have quickly come to be regarded as one of the most prestigious events on the calendar. This year’s event is part of an exciting and expanding calendar of cultural events for Renfrewshire following the successful shortlisting of Paisley’s bid for UK City of Culture 2021.

Chieftain of the event, Provost Lorraine Cameron, said: “The Paisley Pipe Band Competition has attracted huge numbers of people to the town in the years that the event has been running.

“The standard of piping is extremely high attracting bands from across Scotland to compete demonstrating the prestigious nature of the event.

“These events bring big crowds into our towns and give local communities another reason to feel proud about living in Paisley and Renfrewshire. It’s also a great reason to join in the celebrations as Paisley 2021 has made it through to the second stage of the bid for the UK City of Culture 2021.”

This marks the second large scale piping event to take place in the town this year. Earlier this year, Paisley hosted the British Pipe Band Championships which saw thousands of people turn out to St James Playing Fields for one of the biggest events in world piping.

A Family Fun Day has been organised by Renfrewshire Leisure in and around the grounds of the Arts Centre, to mark its 30th anniversary, on Saturday between noon and 4pm. Youngsters can enjoy watching puppet theatre, take part in craft workshops and enjoy drama from PACE.

Glasgow News? Daily Updates part of our network
Support pours in as Paisley becomes only Scottish place on UK City of Culture...

BAND OF SKULLS TO PERFORM INTIMATE SET IN THE BUNGALOW, PAISLEY
Scroll to top