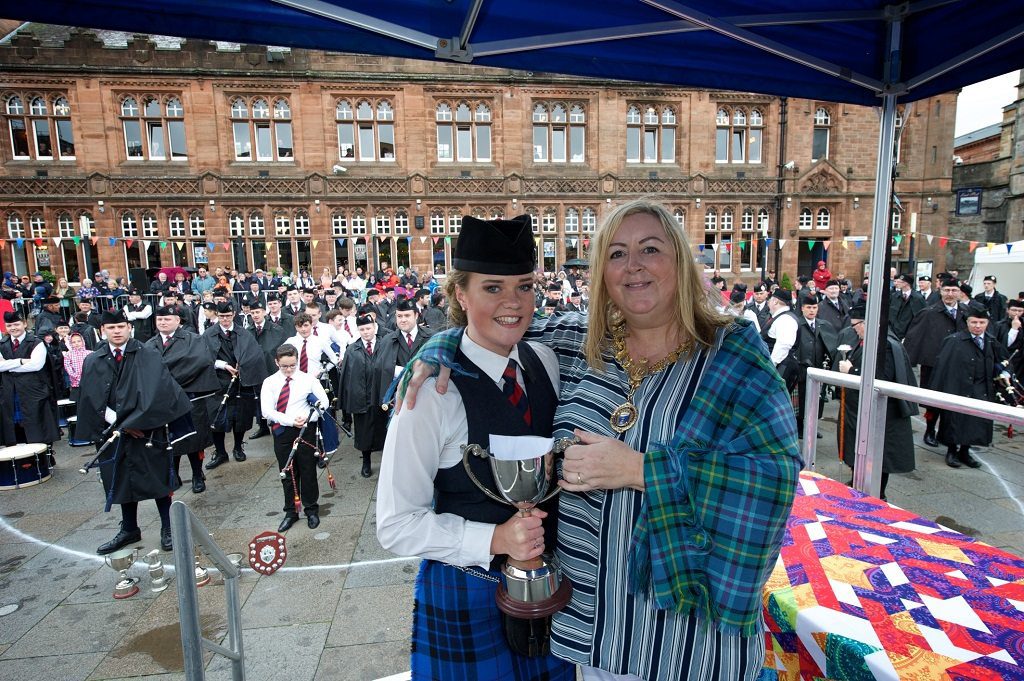 Paisley town centre was filled with the sound of pipes and drums on Saturday (22 July) for the eighth annual Pipe Band Competition.

Crowds lined High Street and County Square to watch pipers and drummers from across Scotland compete to be named champions.

The successful event is part of the exciting and expanding calendar of cultural events across Renfrewshire taking place as part of Paisley’s bid to be named UK City of Culture in 2021 with the town last week being named as the only Scottish place on the shortlist for the prestigious title.

Each band marched from High Street to the final tuning area at the Cenotaph before making their way to the main arena in County Square. They then performed to a panel of judges from the Royal Scottish Pipe Band Association who organise the event each year.

The standard of competition was extremely high, with Johnstone Pipe Band performing particularly well in their categories and Dumbarton and District securing the novice award.

The winning bands were presented with their trophies by chieftain of the event, Renfrewshire’s Provost Lorraine Cameron. She said: “The Paisley Pipe Band Competition is an event that many people across Scotland look forward to each year and I was very proud to be able to present the bands with their recognition for a great day’s entertainment.

“Paisley demonstrated once again that it can put on successful events providing a great setting for the pipers, drummers and large crowds who came to experience the sounds and spectacle of Saturday’s competition. There was even more reason to celebrate as the event was the first one held in the town since the announcement was made that Paisley had made it through to the next stage in its bid to be named UK City of Culture 2021.”

Saturday also marked the 30th anniversary of the Paisley Arts Centre. To celebrate this important milestone Renfrewshire Leisure organised for a Family Fun Day to take place where children and parents could enjoy a range of activities including watching a puppet theatre, performances from PACE and participating in craft workshops.

The Paisley 2021 bid has made it through to the second and final stage of the competition and is the sole Scottish town or city featured in the shortlist. The bid aims to transform the town and Renfrewshire’s future by using its unique cultural and heritage offering as the home of the Paisley Pattern and one-time centre of the global textile industry.

Final bids are expected to be lodged with the UK Government’s Department for Culture, Media and Sport in in September 2017 with a final decision expected in December.