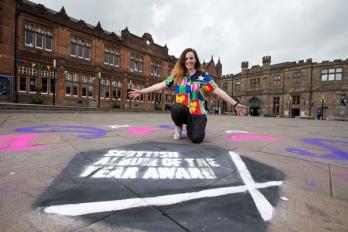 The ten Shortlisted albums for the Scottish Album of the Year (SAY) Award were revealed this evening at a special BBC Music Day programming of the BBC Radio Scotland Quay Sessions. The selected albums continue to confirm Scotland as a nation with incredible cultural importance, especially within music.

The SAY Award 2017 Shortlist is as follows (in alphabetical order):

Meursault I Will Kill Again

The public can listen to and learn more about each album on The SAY Award Shortlist by visiting www.sayaward.com

Beginning in March, the process has taken almost 300 public submissions, to 20 Longlisted records, chosen by a panel of 100 impartial nominators, to the Shortlist of 10 albums; one of which was chosen by the public through a 72-hour online vote and the other 9 chosen by an independent panel of judges. This year’s shortlisted artists have each won £1,000, provided by long-term award partner Creative Scotland.  In addition to this, each artist will be awarded with an exclusively designed trophy created by the winner of  The SAY Design Commission, Lisa Crockard.

The 72-hour voting window, which closed at midnight on Wednesday, saw Pictish Trail being voted on to the shortlist by the public.

Johnny Lynch, who goes under the guise of Pictish Trail said; “Wow.  Surprised, confused, humbled and mildly aroused to have won the popular vote for the Scottish Album Of The Year Shortlist.  Thank you to all those that voted for Future Echoes, and to all those who forgot to vote but who would have voted for a different album.  I couldn’t have done it without you. “

Composer and performer Anna Meredith also joined the show sharing news of her year since winning the coveted SAY Award for her album ‘Varmints’ in 2016.

The SAY Award winner will be announced on June 28th in the elegant surroundings of Paisley Town Hall in support of  Paisley’s bid to become UK City of Culture 2021. The winning artist will pick up a £20,000 cash prize also provided by Creative Scotland.

The SAY Award is produced by the Scottish Music Industry Association (SMIA), in partnership with Paisley for UK City of Culture 2021,Creative Scotland, Black Bottle, TicketWeb and PPL. The award, which was launched in 2012, celebrates, promotes and rewards the most outstanding Scottish albums released each year. Respected by artists and valued by the industry, The SAY Award is responsible for a surge in musical discovery and an explosion of impassioned debate on social media. Previous SAY Award winners are Anna Meredith (2016), Kathryn Joseph (2015), Young Fathers (2014), RM Hubbert (2013) and Bill Wells & Aidan Moffat (2012).

Andy Hannah, SAY Award Judge and Journalist for The Line Of Best Fit said: “It’s clear from previous winners that SAY award and the judges have chosen records which absolutely deserve all the plaudits which came their way before and after. It also brings vital, beautiful pieces of music to a wider audience – which can only be a good thing. As for this year, creating a shortlist isn’t any easy task when there are a number of records to get excited about. For me, it’s an honour to get to champion a handful of albums which have improved my life in the past 12 months.”

Robert Kilpatrick, Projects and Operations Manager, Scottish Music Industry Association (SMIA), said: “On behalf of the Scottish Music Industry Association, I’d like to say a huge congratulations to the 10 fantastic albums that have been Shortlisted for this year’s SAY Award. The Shortlist, without doubt highlights the strength and diversity of the recorded output of our country’s artists, and we look forward to celebrating all 10 titles at The SAY Award ceremony later this month, where this year’s winner will be revealed.”

Jean Cameron, project director of Paisley’s bid to be UK City of Culture 2021, said: “Once again, the SAY Award shortlist shows the diversity and quality of Scotland’s music scene and we can’t wait to welcome the acts on the shortlist to Paisley Town Hall later this month for the ceremony itself.

We are delighted to be the SAY Award hosts for another year – not only does it show off Paisley’s unique venues and ability to host, but to have attracted one of the most prestigious dates in Scotland’s musical calendar to the town is a real thumbs-up for Paisley’s growing reputation as one of Scotland’s key cultural destinations.”

Alan Morrison, Head of Music at Creative Scotland, said: “One of the best things about the SAY Award Shortlist is that, year after year, it encourages music fans to take their ears into another territory and listen to something they haven’t heard before. Other awards can only look on in envy as the SAY Award puts traditional harp and flamenco-hued guitar next to thunderous power-pop and soundscape electronica, in the full knowledge that every album here is absolutely worthy of your undivided attention. All of these acts either put their own distinctive stamp on their chosen genre or bend the rules out of shape to create music that’s thrillingly hard to define. Creative Scotland is proud to support a shortlist that’s as uniformly great as this.”

Emma Casey, Global Marketing Manager for Black Bottle, said: “We’re delighted to be an official partner of The SAY Award this year. We’re proud of our roots in Scotland and passionate about doing things differently, so it’s great to celebrate the work of these talented Scottish musicians who have all created their own unique sounds”

Jonathan West, Director of Marketing & Artist Services, TicketWeb, said: “I really didn’t know how the panel were going to get the shortlist down this year. It’s really cool that the public have nominated Pictish Trail. He’s become a real icon of Scottish music over the last decade so it’s beautiful to see there’s still a place in the hearts of music fans for him. Bring on the ceremony, we can’t wait to be back in Paisley!”

Peter Leathem, Chief Executive, PPL, said: “For decades, Scotland has been a thriving hotbed of musical talent, nurturing artists as diverse and varied as Orange Juice, Belle & Sebastian and Camera Obscura right through to Biffy Clyro, Chvrches and Young Fathers.  This is why, at PPL, we think it is vitally important to continue our partnership supporting the SAY Awards, an event that recognises and puts on a spotlight on some of the best music coming out of Scotland.”

“Remembered with a Smile”
Scroll to top