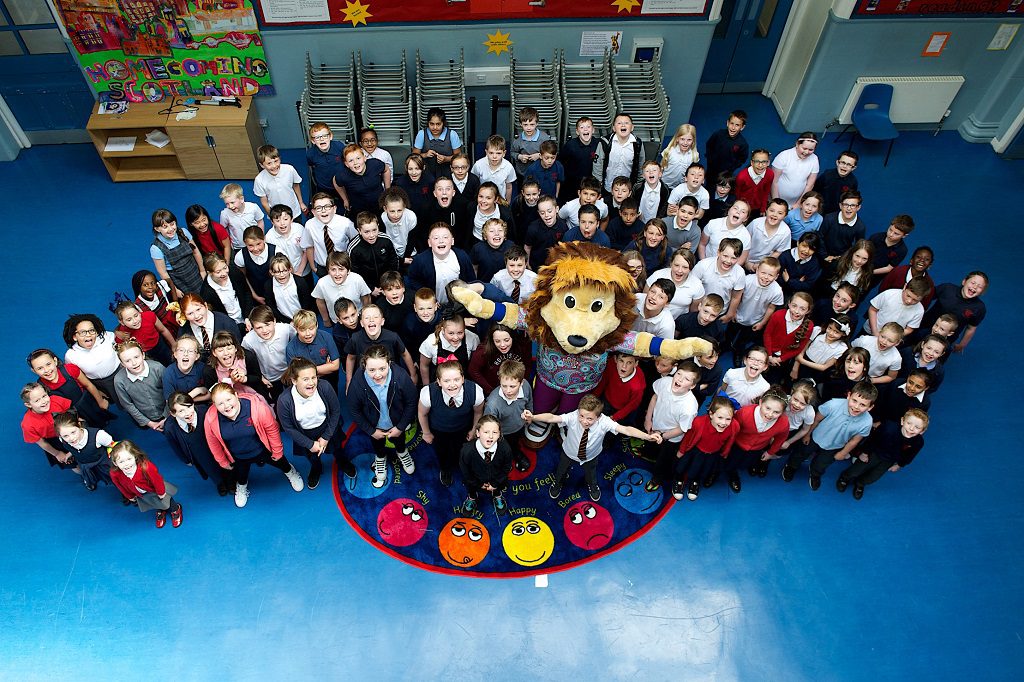 The new Paisley First Mascot has been revealed to the Paisley school boy who helped bring him to life.

Paisley First received hundreds of entries for the competition from school children all across Renfrewshire but Christopher impressed judges with his colourful creation which was picked from the final shortlist of ten entries.

But before then, he popped into Williamsburgh Primary School to say hello to Christopher and his classmates.

So what did Christopher think of his creation?

Christopher said: “He looks great, I can’t believe how much he looks like my drawing.”

“I can’t wait to be in Paisley town centre and be able to see him walking about, he looks fantastic!”

Head teacher Nova Scott said: “This is a wonderful achievement for Christopher and it’s great to see all his hard work has paid off.”

“We’re so proud of Christopher and thrilled that he has helped put Williamsburgh Primary School on the map.”

Paisley First Chairman Ian Henderson said:” It’s important to involve the children in all the positive projects we are working on to bring more people to the town centre.”

“Thanks to Christopher, we now have a fantastic new member of the Paisley First team.”

“We’re looking forward to seeing him at events throughout the town, starting with CarFest this Saturday and then our free programme of entertainment taking place in the town every Saturday during the school summer holidays.”

As well as being able to see his mascot design brought to life, Christopher received a £25.00 prize and as the winning school, Williamsburgh Primary School Parent Teacher Association also received a cheque for £200.00.

This is the fourth year of St. Vincent’s Hospice CarFest but its first visit to the town centre with all funds raised on the day supporting the Hospice in Howwood. There will be classic, vintage and specialist custom cars on show, as well as muscle cars, supercars and emergency vehicles, not to mention motorbikes and even a land train!

As well as treats for motor enthusiasts, there will be plenty of family-friendly fun with fairground rides, children’s entertainment, stalls, tombola and a prize raffle.

Organised by MaxSafe Solutions and sponsored by Paisley First, the cars will be on show at locations including County Square, The Cenotaph, High Street and Johnston Street from 10 am until 4 pm.