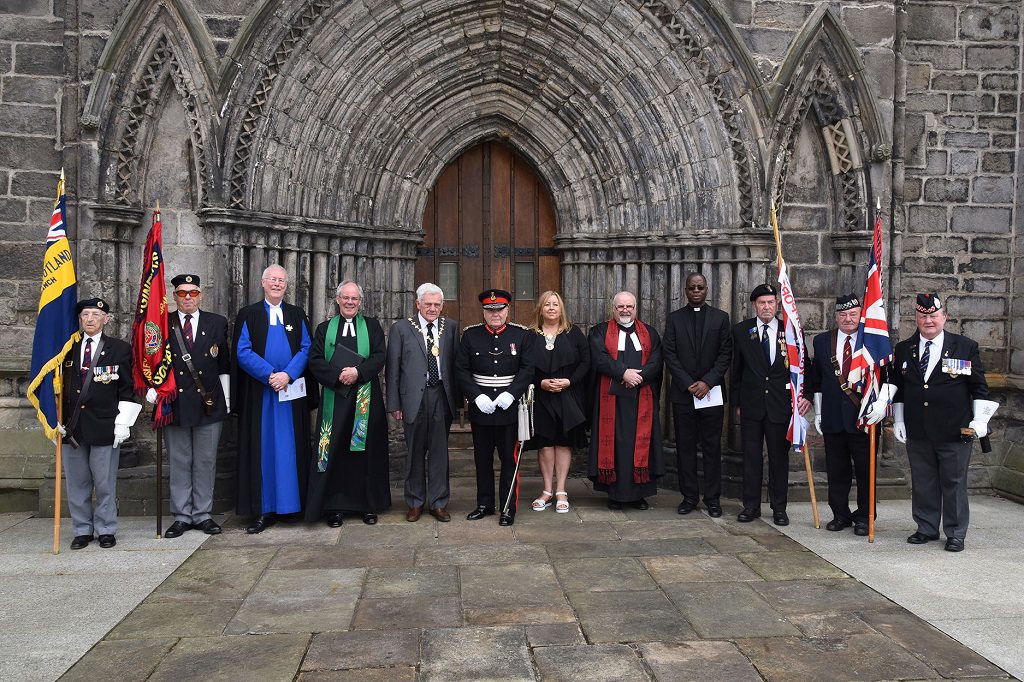 Renfrewshire and Inverclyde have come together to celebrate Armed Forces Day with a special service at Paisley Abbey.

The Renfrewshire Schools Brass Ensemble performed within the Abbey as members of the congregation arrived for the service- which was led by Reverend Alan Birss, Minister of Paisley Abbey, Reverend Robert Craig, Minister of Stow Brae Kirk and Canon Oliver Freney from the Diocese of Paisley.

Inverclyde Schools Choir perform at the service within Paisley Abbey.

The Royal British Legion- Paisley Comrades Branch displayed their standard in the Abbey cloisters as the congregation were piped in by a lone piper.

The Lord-Lieutenant of Renfrewshire, Guy Clark, completed the first reading of the service, and was followed by Renfrewshire’s Provost, Lorraine Cameron.

The Inverclyde Senior Choir then put on a poignant performance of Goodnight my Angel and Love Divine which was followed by a prayer of intercession, led by Provost Brennan.

Provost Cameron said: “It is extremely important that we recognise the sacrifices which our Armed Forces have made, and will make, to ensure the safety of our country.

“I was delighted to see such a large attendance of veterans, serving military personnel and members of the public there to pay tribute to the men and women who put their lives on the line for our benefit.”

The service took place in advance of the national Armed Forces Day- which is Saturday 24 June- in order to allow those in attendance the chance to pay tribute at both a local and national service.

Provost Brennan said: “The service was led with dignity and respect and the setting of Paisley Abbey was befitting of such a meaningful occasion.

“I hope the service can provide comfort to those in attendance as we come together to remember the servicemen and women lost in all conflicts.”

The service was preceded on Friday by a short ceremony outside Renfrewshire House which saw the Armed Forces Day flag raised by Royal Navy veteran Robert Pope, of the Royal British Legion- Paisley Comrades branch.

Inverclyde will host their flag raising service on Monday 19 June at 10:30am in Clyde Square in Greenock.