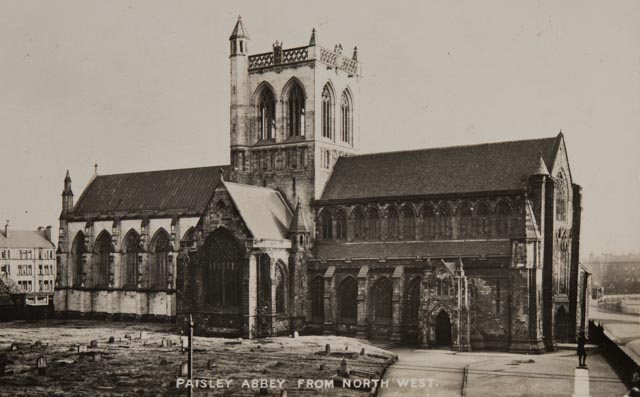 A mysterious site next to the grounds of Paisley Abbey will be unearthed after funding was secured for an archaeological dig.

The north west side of the building. Original source – black & white 3½” x 5½” photograph

Renfrewshire Council has been awarded £10,000 from the Heritage Lottery Fund’s (HLF) Stories, Stones and Bones programme as part of the Year of History, Heritage and Archaeology to conduct a ‘Wee Dig’ of part of the Abbey Drain site.

The 12th century Abbey is renowned not only for its outstanding architecture but also as the cradle of the Royal House of Stewart as a number of the Stewarts were buried within its walls. It is also believed that Robert II, the first Stewart king of Scotland and the grandson of Robert the Bruce, was born within the walls of Paisley’s Abbey. The Abbey also has a fascinating underground history – the magnificent medieval Abbey Drain.

The Paisley “Wee Dig 2017” will take place between 18 and 24 September 2017. This significant heritage-led regeneration project will see a previously unexplored part of the Abbey Drain site excavated to shed light on what lies beneath alongside a programme of events to allow people to get involved. This ties in with ambitions set out in the town’s bid for UK City of Culture 2021.

The “Wee Dig 2017” will expand what is already known about Paisley’s monastic past as well as inspiring some budding archaeologists of the future.

Councillor Iain Nicolson, Leader of Renfrewshire Council, said: “The ‘Wee Dig 2017’ is a very exciting project which celebrates our unique heritage – one of the main themes of our Paisley Town Centre Action Plan 2016 – 2026 which aims to regenerate the town centre and create jobs.

“This project demonstrates how we are delivering on these plans by making the most of our assets to attract more people and businesses into the town.”

Commenting, Lucy Casot, Head of HLF in Scotland, said: “The Heritage Lottery Fund is a key partner in the Year of History, Heritage and Archaeology and it’s our ambition that people of all ages will have the chance to discover something new about the heritage they care about.

“We’re delighted that, thanks to funding from the National Lottery, Paisley will be opening the door to fun, learning and everlasting memories for many people as we celebrate this special year.”

Over the course of the week a series of interactive workshops will be held with a number of local groups and members of the public. These sessions will involve experiencing the dig itself, learning about various archaeological techniques and looking at artefacts from previous digs.  A film on the Paisley Abbey Drain will be featured to allow visitors to see what is under the area of the dig site.

The dig and supporting activities will be led by archaeologist firm GUARD Archaeology Limited who will manage the project on the ground, lead the workshops and be on hand to answer questions about what is uncovered.

Iraia Arabaolaza from GUARD, said: “We are very excited to be part of the Wee Dig and work alongside volunteers and local people. This project will provide an opportunity to carry on with our long involvement with Paisley and the Abbey Drain, and introduce this part of local heritage to future generations.”

Reverend Alan Birss, Minister for Paisley Abbey said: “I am delighted to support the Wee Dig project.  It is always fascinating to discover more about the past. It is good that the dig will have a strong community focus as the history of Paisley is so closely interwoven with the Abbey’s history.

“The Wee Dig will give everyone the opportunity to become detectives investigating our shared past.”

The public is encouraged to come along, get involved and to share their experiences of this week-long event on Facebook and Twitter using the hashtag #WeeDig2017.

Further information about the programme of activities and guidance on how the public can get involved will be available later this summer.

£250,000 set to be invested to revitalise Renfrewshire’s local environme...
Scroll to top
Go to mobile version