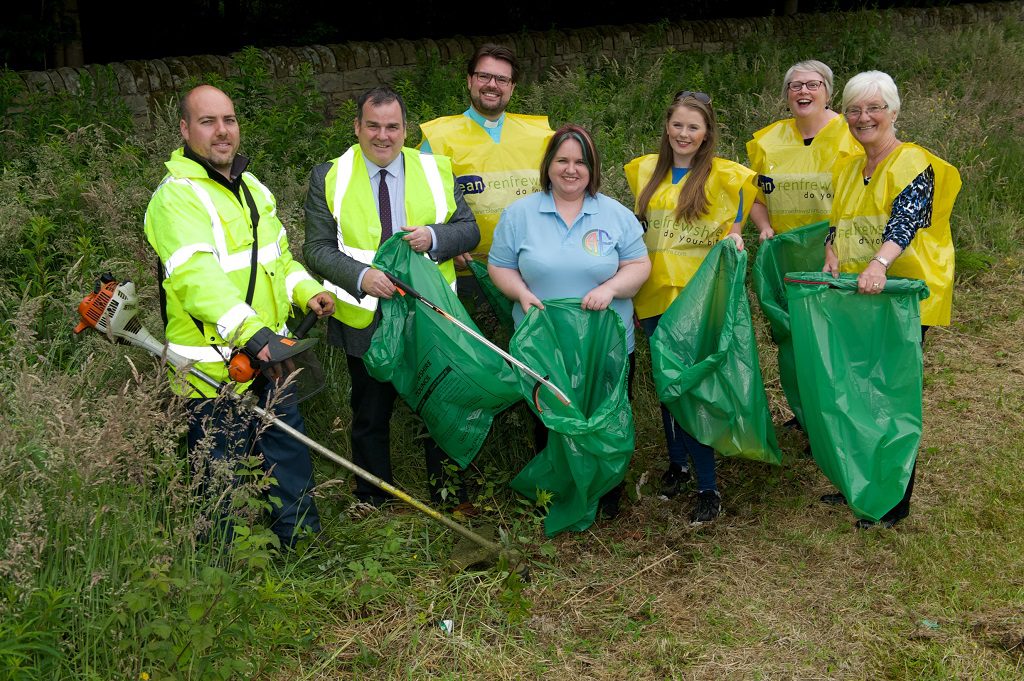 Councillors will consider plans for a £250,000 investment to deliver a programme of improvements to Renfrewshire’s local environment.

Renfrewshire Council Leader Iain Nicolson (second from left) and Councillor Cathy McEwan, Convener of the Infrastructure, Land and Environment Policy Board (furthest right), with members of Community Action for Erskine.

A report published for the Council meeting on Thursday (29 June) outlines plans to tackle the challenges faced in delivering improved environmental standards and a desire to support local communities in their contributions to improving Renfrewshire.

The proposed investment would deliver a programme of focused activities to clean up roadsides and tackle litter and dog fouling hot spots as part of an initial environmental clean-up. This would be followed by improvements to roads signage and infrastructure.

There would also be a marketing campaign designed to support and empower communities to help them address the local issues that matter to them most.

The programme would be launched in late summer 2017 and would focus on all key routes and include additional activities in town centres, neighbourhoods and villages, parks and open spaces.

The initiative would see a high-profile public engagement campaign take place to support, and work in partnership with local people and key partners.

A series of seasonal campaigns would be undertaken to raise awareness, encourage community participation and demonstrate the benefits for people to get involved in environmental improvements – particularly targeting local people, schools, businesses and communities.

Renfrewshire Council Leader Iain Nicolson, said: “We’ve listened to what the communities of Renfrewshire have told us and one of their highest priorities is the cleanliness of our streets.

“The proposals which are set to be considered will ensure that levels of litter, dog fouling and waste will be tackled and our roads infrastructure will be revitalised.

“The quality of the environment plays a huge part in civic pride and we want to encourage residents, groups and organisations to take ownership of the campaign and help make it their own.

“We want to make Renfrewshire a great place to live, work, visit and invest in, and by listening to what communities have told us and improving our local environment, we can provide a solid foundation to deliver these ambitions.”

The report will be considered at the Council meeting on Thursday 29 June.