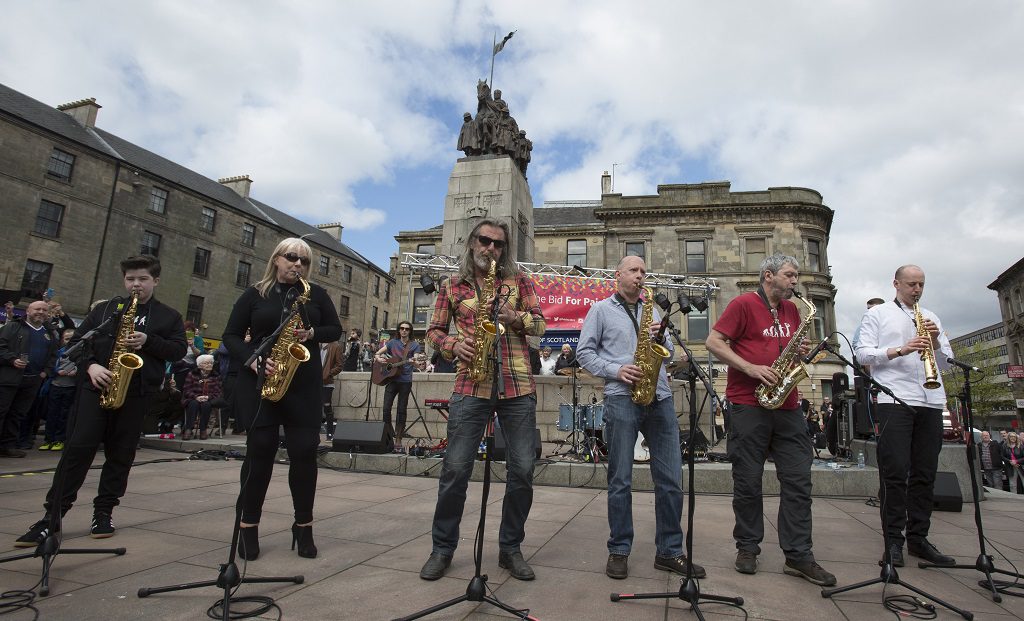 Paisley marked the town’s bid to be UK City of Culture 2021 in spectacular style today – with a mass outdoor rendition of Gerry Rafferty’s classic Baker Street. Around 25 saxophonists were joined a by a live band and a crowd of hundreds on the town’s High Street for a special performance of the Paisley-born singer’s iconic worldwide hit, in the week of what would have been his 70th birthday. The Baker Street performance was the brainchild of Tommy McGrory of local music charity Loud and Proud, and delivered in partnership with the Paisley 2021 bid team and backed by youth theatre group PACE.

The event was part of an action-packed weekend for the town – with Abbey Close hosting the third annual Paisley Food Festival, with thousands of visitors enjoying street food from some of the country’s finest traders.

The event also featured cooking demos from BBC Masterchef – The Professionals winner Gary Maclean, free workshops for kids, and live entertainment from acts including The Voice finalists Into the Ark and CBeebies star Katy Ashworth.

And Paisley Town Hall was hosting the final day of the 30th annual Paisley Beer Festival – the largest real-ale festival in Scotland.

Paisley’s bid to be UK City of Culture will be lodged with the UK Government’s Department of Culture, Media and Sport this week, ahead of Friday’s deadline.

Paisley 2021 bid director Jean Cameron said: “Paisley’s bid to be UK City of Culture 2021 has been a mass movement, with incredible buy-in from the local community.

“That was evident again today, with a wonderful turnout and a great atmosphere at both the Baker Street performance, and the food and beer festivals.

“One of the key things our bid will celebrate is the incredible wealth of talent produced by this town, and Gerry Rafferty is one of the best examples of that – so this was a fantastic way to mark the bid submission later this week.”

Gerry’s daughter Martha added: “My father was very proud of his Paisley roots and I am sure he would have been supportive of the town’s UK City of Culture bid.”

The UK Government is expected to announce a shortlist of bidding places over the summer, and the winner by the end of the year.

Glasgow News? Daily Updates part of our network
Rising Property Prices Indicate Homes Are Out-Earning Their Owners Over a Third...