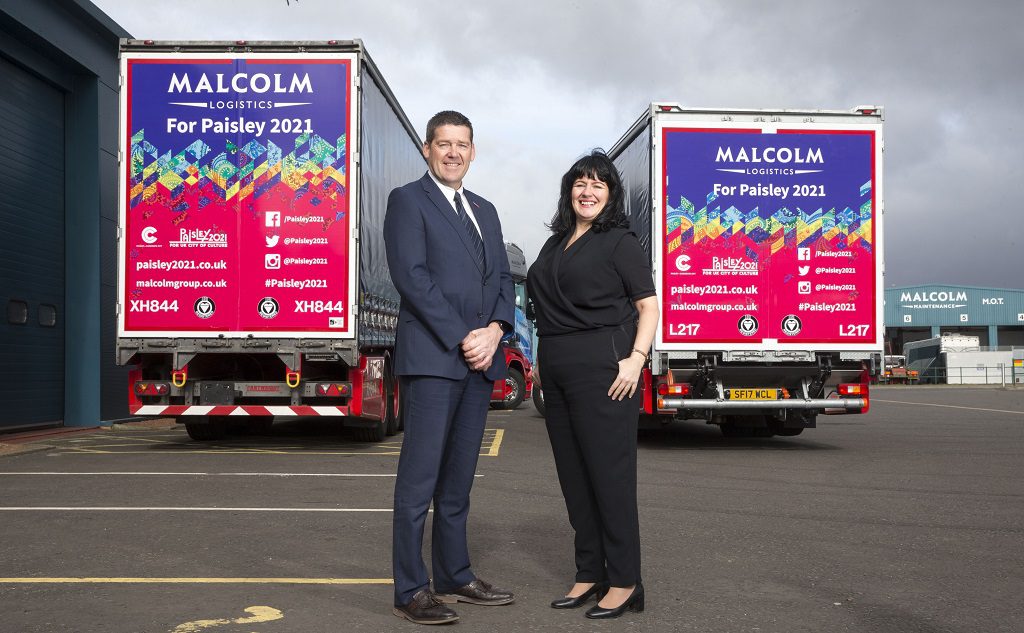 Paisley’s bid to be UK City of Culture 2021 is now being seen across the UK – thanks to one of the country’s top logistics and construction companies.

The Linwood-based Malcolm Group wrapped the back door of a trailer in Paisley 2021 branding – and are joining more than 150 Renfrewshire businesses backing the town’s bid.

The company – which will celebrate its centenary in 2021 – started life with a horse and cart delivering coal around Brookfield in Renfrewshire, and has since grown into a company with more than 2,000 employees.

The two Paisley 2021 trailers are part of the Malcolm Group’s fleet of more than 500 vehicles – and will soon be spreading the town’s name far and wide. Paisley’s bid to be UK City of Culture 2021 is part of a wider push to transform the town’s fortunes using its unique cultural and heritage story.

The competition is run by the UK Government, and Paisley’s bid is due to be lodged with the Department for Culture, Media and Sport at the end of April.

Andrew Malcolm said: “I was born and bred in Renfrewshire and the family business has been based here since 1921 – my father grew it from a base in Murray Street in Paisley, and a lot of our workers come from Paisley, Elderslie and Johnstone

“The Paisley 2021 bid will be great for Paisley and Renfrewshire – I hope it will help regenerate the area, encourage more people to visit, and help with job creation and stability.”

Jean added: “The Malcolm Group is a great homegrown success story with a long history in the area – to have companies of this calibre spreading the Paisley 2021 message is a real thumbs-up for the work done here over the past year.

“In doing so they are joining more than 150 Renfrewshire businesses to back Paisley’s bid – a list including other big names such as Glasgow Airport, Diageo, intu Braehead and the University of the West of Scotland.

“Paisley’s bid is part of a wider push to boost the local area by creating jobs, bringing in new visitors, and helping build a new town centre economy based around creative industry and Paisley’s unique heritage offering – and we are delighted local businesses recognise the value of that and are getting on board in such numbers.”