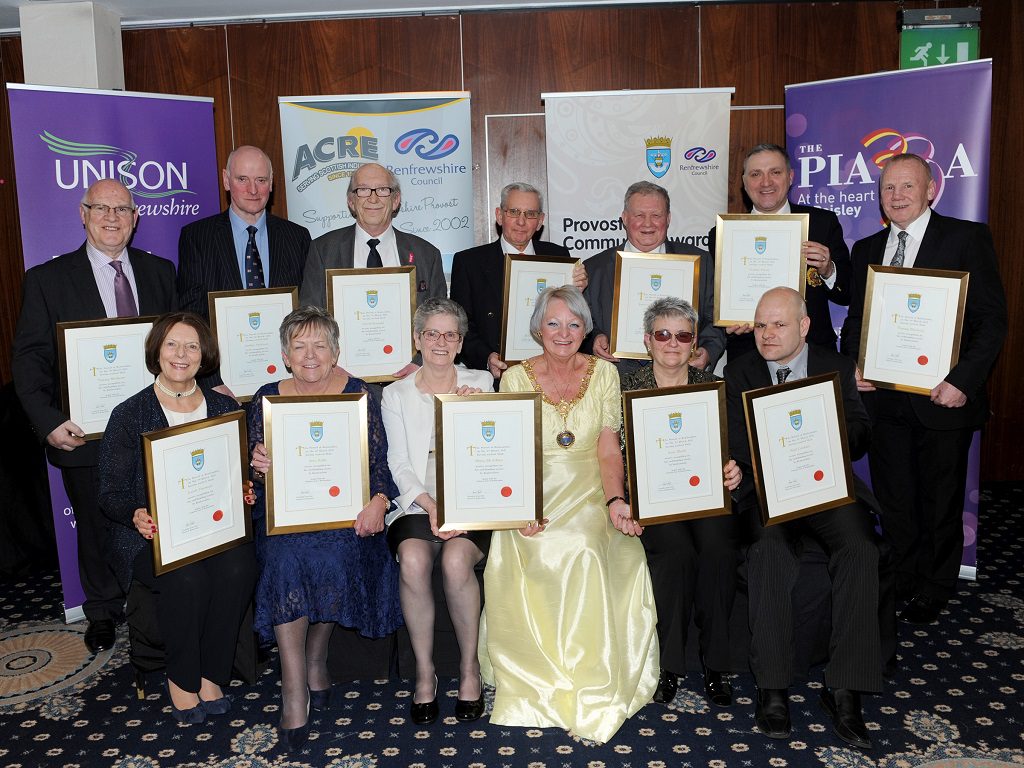 Inspiring members of the Renfrewshire community were honoured as the 20th Provost’s Community Awards took place.

Renfrewshire’s Provost Anne Hall was joined by compère Gina McKie to help celebrate the achievements of local community members who go above and beyond the call of duty to make Renfrewshire a better place.

Over 80 outstanding nominations were collected across five categories before a judging panel came together to choose the winners.

They, along with an invited guest and their nominator, were invited to a special ceremony held at the Normandy Hotel in Renfrew.

The prestigious Freedom of Renfrewshire was also awarded- for only the fifth time- to the 102 Field Squadron for their service to the area as they celebrate their 50th anniversary this year.

The Squadron are a support arm to the Armed Forces both at home and abroad and have been a valuable resource for the Renfrewshire community. They helped rescue residents from their homes during the extreme flooding in Paisley in 1994 while they have also provided reserves to operations abroad in Iraq, Afghanistan and Cyprus.

Other recipients of the award include Finding Your Feet founder Corinne Hutton, sculptor Sandy Stoddart, Charleston Drummer Tony Lawler and the Argyll and Sutherland Highlanders, 5th Battalion, The Royal Regiment of Scotland.

The awards ceremony also recognised the achievements of fourteen outstanding members of the community through the awarding of the Provost’s Distinction Certificates.

Provost Hall said: “This will be my final Community Awards and I feel privileged to have been able to recognise so many outstanding members of our community during this time.

“We are fortunate to have a community in Renfrewshire who are so willing to be selfless and work together to make this area a wonderful place to live.

“My congratulations go to all our award winners and they have deservedly been recognised for their work within the community.

“I must give a special mention to the 102 Field Squadron who have served Renfrewshire for over 50 years and fully merit receiving the highest possible civic honour.”

Scotland’s only direct link with South Korea returns to Glasgow with additional...
Scroll to top