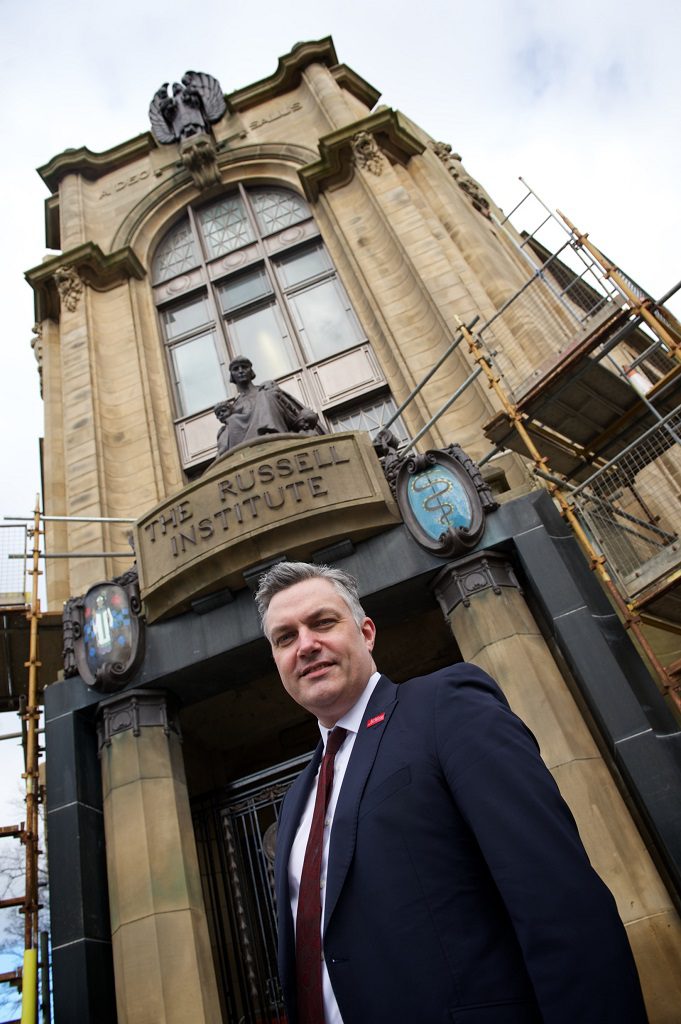 Restoration of the iconic Russell Institute building is nearing completion as part of major moves to revitalise Paisley Town Centre.

Renfrewshire Council Leader Mark Macmillan visited the Category A-listed building in the heart of Paisley which is being transformed through a £5 million investment into a Skills & Employability Hub.

The former health centre will re-open its doors this summer, home to Skills Development Scotland and the Council’s Invest in Renfrewshire employability team.

It is expected to house around 120 employees including careers and employability staff helping unemployed people across Renfrewshire and working closely with local businesses to create further jobs and grow the local economy.

Main contractors CBC Ltd have been charged with ensuring the distinctive features of the Institute are retained, from its ornate sculptures on the outside of the building, to its stunning staircase and balcony inside.

The Institute celebrates its 90th anniversary this month and a campaign will launch next week calling for the people of Renfrewshire to share their stories and photographs of this iconic local landmark.

Councillor Macmillan said: “It is fantastic to see first-hand the progress being made as the restoration of the iconic Russell Institute building nears completion.

“It is a stunning building and the revamp is being carried out to preserve its architectural features. I know that the building means much more to the people of Paisley than bricks and mortar and I am pleased future generations will be able to appreciate its splendour.

“It is remembered fondly as a health centre and in its new role as a Skills and Employability Hub, it will provide an excellent environment in a central location to help generate new jobs and opportunities for the people of Renfrewshire.”

The work at the Institute was sparked by the passion of local volunteers in the Paisley Development Trust and is funded by the Council, Scottish Government and Historic Environment Scotland.

It is a key part of a range of projects and initiatives to bolster business and drive people back to the town centre, including the town’s bid for UK City of Culture 2021.

Paisley is one of three Renfrewshire town centres benefiting from the installation of free public access Wi-Fi.

The former Arnotts department store is being converted into apartments and a restaurant whilst the second major shopfront improvement scheme has opened around High Street following its success on Causeyside Street.

Work is under way on a new publicly-accessible museum store in a previously-empty unit on Paisley High St and plans are advanced for a new £5m library and £49m revamp of Paisley Museum.

Visitors to the town centre will also have noticed the giant gable end mural on Johnston Street, the first of several pieces of artwork led by business group Paisley First, tapping into the creative potential of Renfrewshire and part-funded through the Council’s Culture, Heritage and Events Fund.

Councillor Macmillan added: “Changes in the way people shop have changed the role of the high street – but here in Paisley we are showing how investment in heritage, culture and events can be used to breathe new life into a town centre and bring in footfall which traders can benefit from.

“We have implemented a multi-million pound regeneration plan and made major investment to create a high quality environment which people are proud of, one which attracts visitors and drives economic growth.

“Paisley town centre is home to 122 listed buildings – the second highest concentration in Scotland. These outstanding architectural, heritage and cultural assets are key to driving regeneration and transforming the area’s future.”