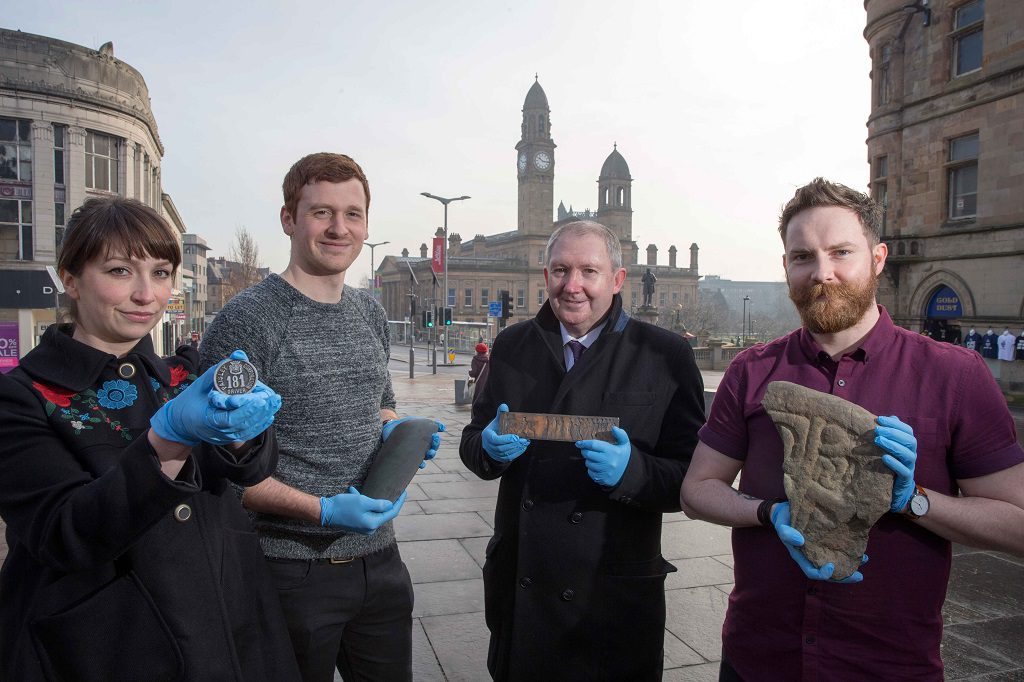 Paisley will soon be home to Scotland’s first high street museum store – as part of a wider plan to use culture and creativity to help breathe new life into the town centre.

Work is well advanced on the £2.7m facility, expected to open at the end of 2017, which will house tens of thousands of items from Paisley’s internationally-significant museum collection not on display in the main museum.

The store will occupy the basement of the unit at 7 High Street, currently being fitted out, and will be accessible to the public via a shopfront entrance.

Stella is holding the Egyptian Shabti

Currently, a team is preparing and packing the items at an existing storage facility elsewhere in the town, ahead of the mammoth decant to take place later in the year.

And some of the team gave a sneak peek of the quality and depth of the collection to be housed in the store, by showing off items including:
– a ceremonial 5,000-year-old hand axe dating back to the Neolithic era;
– a fragment of a 10th-century medieval cross found at Inchinnan;
– a copper mould for a frieze of the Parthenon created by renowned 19th century Paisley sculptor John Henning;
– a Paisley tram driver’s badge from the 1960s;

Also on show was an Egyptian Shabti – a small sculpture buried with a person and expected to serve them in the afterlife – dating back to the 26-27th dynasty.

The museum store is intended to complement plans for a £49m revamp of the main Paisley Museum, further up the High Street, due to be turned into an international-class destination based around the town’s unique heritage story by 2022.

The completed facility will be managed by Renfrewshire Leisure Ltd, and Councillor Jim Harte, chair of RL, joined the decant team to preview the items.

He said: “Other places in Scotland have publicly-accessible museum stores, but this is the first time such a facility has been built on a High Street, and will bring a previously-empty unit back into use.

“High streets everywhere – including Paisley’s – have suffered in recent years from changes in the way people shop.

“But we can’t turn the clock back – we need to be creative in finding new ways to repopulate units, and bring in new footfall which existing traders can benefit from.

“The museum store is part of a wider effort to use cultural attractions to do that, along with the UK City of Culture 2021 bid, the plans to revamp the main museum – which we expect to bring 125,000 visitors a year to the town centre – and the relocation of Paisley Central Library to a vacant unit on the high street.

“It was great to meet the team behind the decant and hear the stories behind some of the fascinating items they are uncovering every day.

“Once opened, the facility will give the people of Renfrewshire a chance to see the full extent of the town’s incredible and internationally-significant collection, while also being a top-class educational resource bringing history to life for our pupils.”