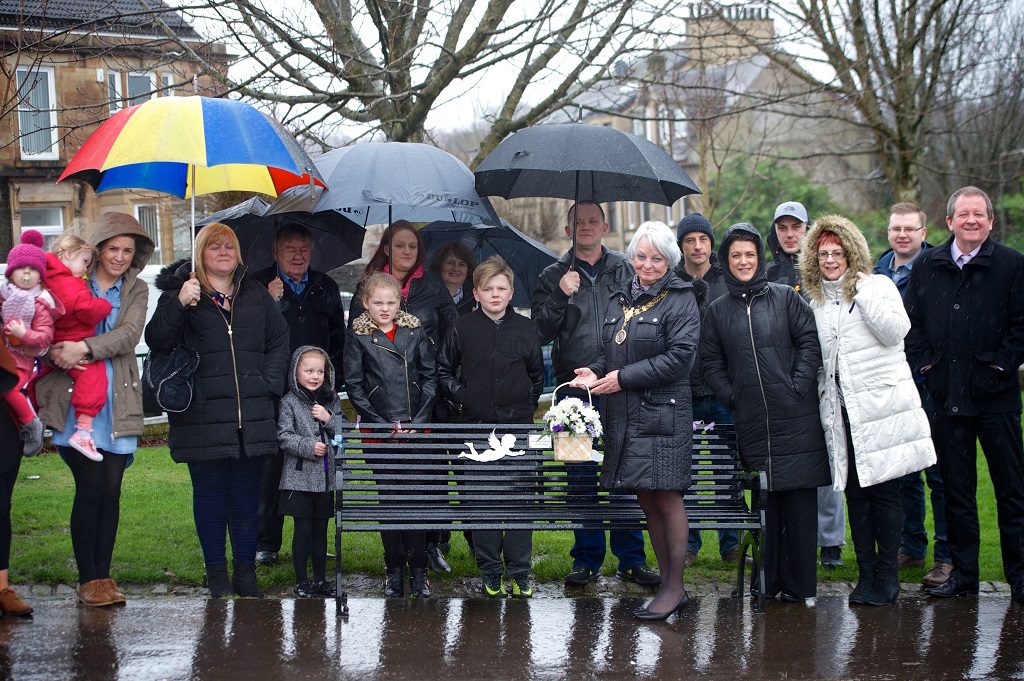 Two memorial benches are providing a place of remembrance for those lost to suicide in Renfrewshire.

Local residents Kate Sharkey and Stephen Torrance have ensured that those who have lost a loved one to suicide will have a place to remember them in both Johnstone and Elderslie.

Renfrewshire’s Provost Anne Hall attended a service at Johnstone Town Hall to mark the one year anniversary of the bench being unveiled in the town’s Ludovic Square.

Kate devoted herself to ensuring Johnstone had a permanent place for people to remember their loved ones after the loss of her son Sean.

Kate said: “I was determined to give those who have been affected by suicide in the area a place to visit where they can reflect on their loss.

“Losing a loved one is something that you won’t truly ever get over but you learn to live with it and having the bench as a place to remember Sean is a comfort in the times it is needed.”

Elderslie now has a similar place of remembrance after a memorial bench was erected directly across from Elderslie Golf Club.

After the loss of his brother Vinny, Stephen Torrance was determined that he would be remembered and, as well as the creation of the bench, the Vinny Torrance Invitational will take place once again this year.

Stephen Torrance on bench dedicated to his brother Vinny

Stephen said: “We will have over 100 men taking part in the golf tournament this year and it is fantastic to have Vinny remembered in this way.

“It is important that men feel able to discuss the issue of suicide and by putting it out into the open through this fun tournament, hopefully we can encourage anyone dealing with mental health issues to seek the support they need.

“My thanks go to Elderslie Golf Club for their support as well as to the local companies who have helped to sponsor the fundraising event, which raises money and awareness for Renfrewshire’s Survivors of Bereavement by Suicide (SOBS) support group.”

Three in every four suicides in Scotland are completed by men and it is important that communication channels are open for those at risk.

Renfrewshire’s Provost Anne Hall, who attended the service, said: “Suicide is an issue that has affected many people throughout Renfrewshire and it is important that we provide the appropriate support to those who need it.

“The memorial benches give the Johnstone and Elderslie communities the opportunity to remember those lost and I congratulate Kate, Stephen and the SOBS group for the work they have put in to achieve this.”

Renfrewshire SOBS support group provides an outlet for those who need support. The group aims to overcome the stigma that surrounds suicide and encourages people to talk to others facing a similar situation.

For more information on the Renfrewshire meetings of SOBS, call 0141 849 2200, or email elizabeth.aitken@renfrewshire.gov.uk.