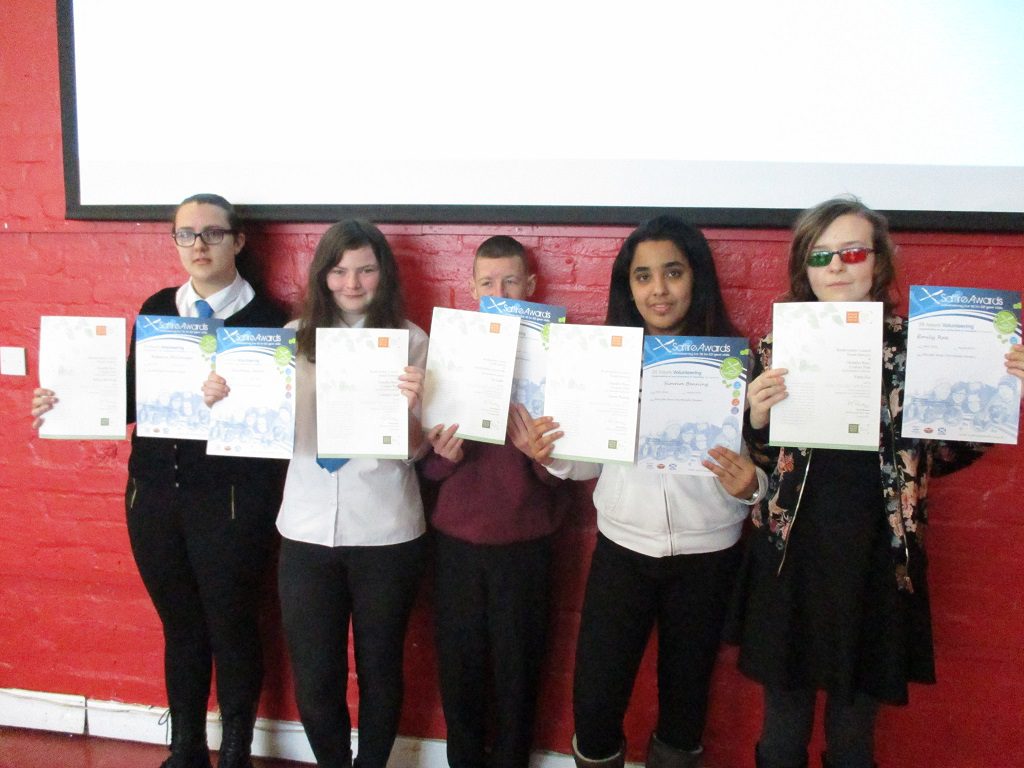 TEENAGE pupils from Mary Russell School in Paisley have been given double honours for their enthusiastic volunteering work at a popular Renfrewshire beauty spot. Seven pupils from the school – six girls and one boy – have been awarded Saltire Awards Approach Certificates and John Muir Discovery Awards for helping with  gardening and tidying tasks at Gleniffer Braes Country Park earlier this year.

The Approach Certificates recognise the young people’s achievement in donating 25 hours of their time to a variety of maintenance, landscaping and litter picking activities to keep the Park clean and tidy. The John Muir Discovery Awards mark their commitment to conserving the environment at Gleniffer Braes while carrying out their volunteer work.

Under the supervision of Streetscene staff working in the Park, the school group learned to use tools – including rakes, spades and a bow saw – to safely remove overgrown shrubbery from paths, cut up fallen tree branches, clear illegal fire sites, weed the car parking area and generally spruce up key spaces within the 480 hectares of wood and moorland space which attracts thousands of visitors a year.

The Mary Russell pupils’ performance impressed the Streetscene personnel, who found them energetic, cheerful, motivated and “a pleasure to work with”.

Catherine Gillen,of Streetscene, said: “Pushing a wheelbarrow up a steep incline with four to five fairly heavy rubbish bags plus tools is no easy task.

“But this young team from Mary Russell really put their backs into everything and they were a great help – we enjoyed having them.”

And the pupils felt the same.

Ian said:  “It was a good experience. I liked working outside.  I would tell other boys and girls to do it.”

Emily said:  “It really built my confidence.  It was hard but fun at the same time.”

“Our students gained a huge amount from participation in the activities.  Learning new skills and achieving success outside school and the classroom has built their self-belief and independence.

“These are fantastic achievements and our School is very proud of them.”

The initiative was part of a rolling programme of personal development activities for young people led by Renfrewshire Council Youth Services staff, who co-ordinated the programme with the school and the Park’s Streetscene team.

Winning the awards is a milestone on the journey for the girls who are working hard to complete their Duke of Edinburgh Bronze Awards.

Earlier this year they fulfilled their expedition assessment on moorland near the Greenock Cut walking route in Clyde Muirshiel Park. This involved walking and exploring the area and camping for one night under canvas with support from Youth Services and a member of the school’s teaching staff.

Councillor Jacqueline Henry, Convener of Renfrewshire Council’s Education and Children Policy Board, said: ”This is a wonderful achievement for the young people involved and shows their commitment and interest in developing themselves and helping the community.

“Their success also shows what can be done when various areas of the Council come together to help our young people reach their potential.”