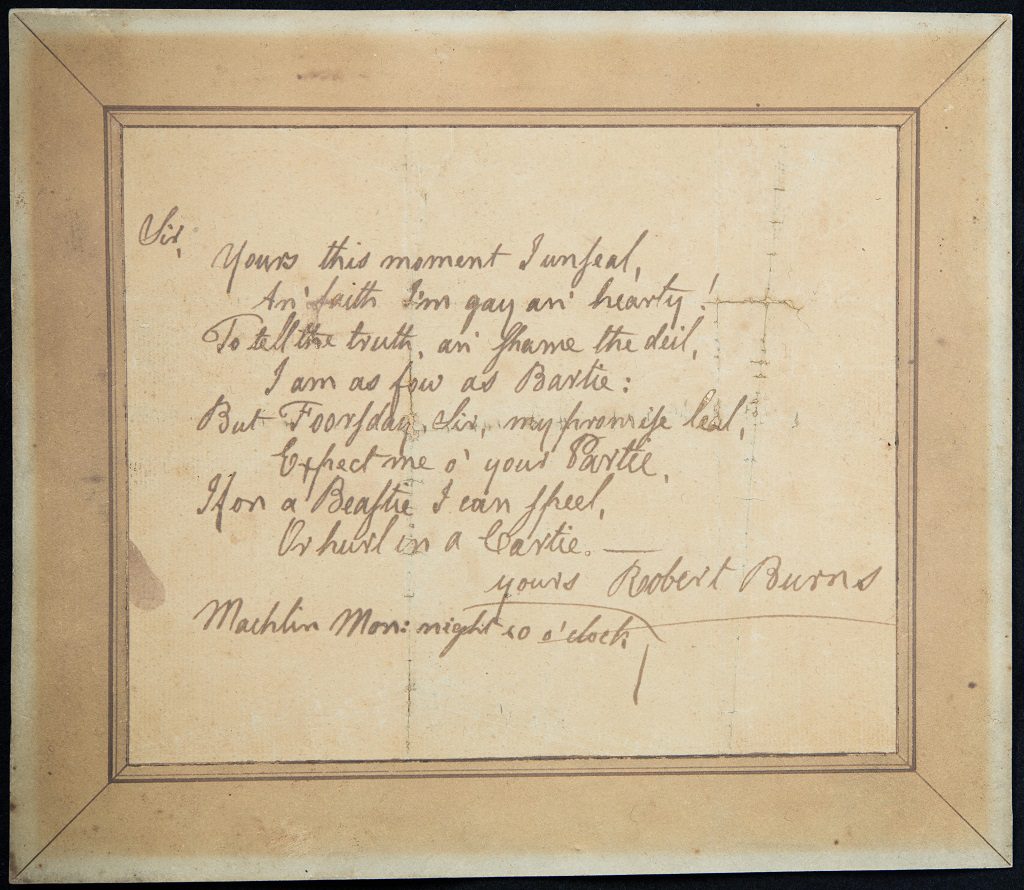 An original Burns manuscript that has been in Paisley Museum and Art Gallery’s collection for almost 100 years, but was only recently rediscovered and authenticated, is to go on display in the museum every January when light levels are low enough to protect the delicate ink on paper artifact, and to coincide with Burns Night. Announcing the month-long exhibit in 2017 (January 17 – February 19) for St. Andrew’s Day (November 30), Renfrewshire Leisure chair, Councillor Jim Harte, said, “I am absolutely delighted that the only existing manuscript of a lovely piece of Burns social verse will be on display in Paisley Museum in the New Year for a limited period and each subsequent January thereafter.

“We are proud to possess this charming piece and thrilled to share it with visitors during what is an extremely important time for Scotland’s largest town. We will be finalising Paisley’s bid for the title UK City of Culture 2021 during the early part of 2017 and this fantastic exhibit reveals yet another layer to our fascinating culture.”

The short verse, written in reply to a party invitation, is in typical Burns style  including wordplay – he combines the tradition for indicating the day of writing with something that suggests he is worse for wear, in “Foorsday”; highlights his joy at the invite, and pledges his attendance whether by horse, or by cart.

The artifact was verified in a letter to the Museum last year by Professor Gerard Carruthers of the Centre for Robert Burns Studies at the University of Glasgow. He said:

“The manuscript is clearly in the handwriting of Robert Burns. The ink and paper are a good match to other authentic Burns manuscript productions.

“The poem dates from 1785 – 1786. The first publication to give an indication of its origins, and how it came to be in the collection of Paisley Library is ‘The Works of Robert Burns Volumes 1 – 5’ edited by The Ettrick Shepherd and William Motherwell. Motherwell was Secretary of the Paisley Burns Club in 1819 and became President in 1821. This puts him at the centre of Paisley literary life when the poem first surfaces. Motherwell noted that, ‘We are informed it was presented to the library by the late Mr. John Clarkson, of McGavin and Clarkson, threadmakers, Paisley’.”

The manuscript will be displayed alongside a portrait of Burns by James Tannock (1784 – 1862) also in Paisley Museum’s collection. Born in Kilmarnock, Tannock was originally a house painter, but after lessons from Alexander Nasmyth – who was a friend of Burns – became a successful portrait painter.

Yours this moment I unseal,

And faith I’m gay and hearty!

To tell the truth and shame the deil,

I am as fou as Bartie:

But Foorsday, sir, my promise leal,

Expect me o’ your partie,

If on a beastie I can speel

Or hurl in a cartie.

The K9 Way
Scroll to top