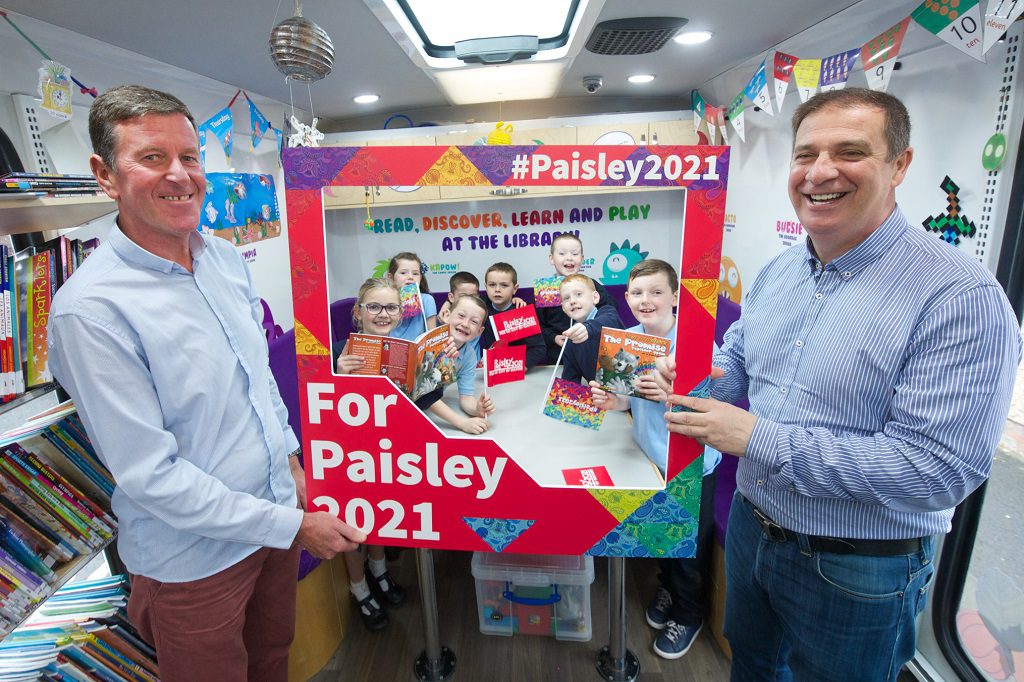 St Mirren FC boss –  and children’s author – Tony Fitzpatrick  was in for a storytelling treat along with a class of P3 pupils when he visited St Catherine’s Primary School in Paisley. The local football legend was in the Gallowhill school to join a storytelling session of his book Babakoochi Bear – The Promise: Together Again, published last year in memory of his late son Tony.

The session was the first time that the popular St Mirren Director and Chief Executive had heard a story teller narrate the loving tribute he penned to Tony jnr, who died in 1983 aged just six.

Tony sat with the 22 Primary 3 pupils who took it in turns to hear children and families mobile library worker Laurence Doherty tell the adventures of the magical bear – named after father Tony’s nickname for his wee boy.  And all the action took place in Renfrewshire Leisure’s award-winning Skoobmobile early years outreach bus on one of its regular visits to St Catherine’s.

While one half of the class was captivated by the storytelling, the other half took part in mini focus group sessions by the Council’s Paisley 2021 officials to hear what the children like about Paisley – and what they would like happen if Paisley is awarded the  coveted UK City of Culture title.

Tony spoke about his book and its characters to the youngsters and donated copies to St Catherine’s school and the Skoobmobile.

His visit was a welcome return to St Catherine’s Primary School as his twins – Steven and James, now aged 27 – attended the primary school for a while as nippers.

Tony said: “It was a terrific experience to hear Babakoochi read by a storyteller – it really came over well and was a great moment for me.

“I loved the experience – the kids really took Babakoochi and the other characters to heart. They started to speak about their own losses. One wee girl said she had lost her dog and her gran – it was wonderful to hear them talking about the themes in the book.”

Originally Tony had hoped to bring along his second Babakoochi Bear story: “The Dream: You Can Do This” – due out in a few weeks with the plot based around Babakoochi’s ambition to become a footballer.

This time, says Tony, the theme will be about the importance of self-belief and determination in reaching goals in life.

Babakoochi is told he’s too small to become a footballer and has to work hard to prove everyone wrong – a theme from Tony’s own young life before he went on to have a glittering football playing career which included captaining St Mirren to the Scottish Cup Final in 1987.

Despite his new book not quite ready to show to the pupils, Tony relished the chance to be with the youngsters.

“It was also really nice to be back in St Catherine’s. I used to pick the boys up from school there.  It was a great day.”

Teresa Brown, Head Teacher of St Catherine’s, said: “Tony’s visit and the Skoobmobile sessions were wonderful opportunities and a great way to inspire the children.

“To welcome an author who has written such a marvellous book and to hear reading brought to the life by the narrator was a fantastic experience for all the children.

“We’ve already begun reading the book which Tony so kindly gave to the school – and the children are loving it!

“We’re also delighted to have the chance to contribute to the 2021 bid to become UK City of Culture.  St Catherine’s has 14 Active Citizenship groups and one of them is for Paisley 2021 – they’re very involved in doing what we can to promote and support Paisley’s goal of getting the UK title.”