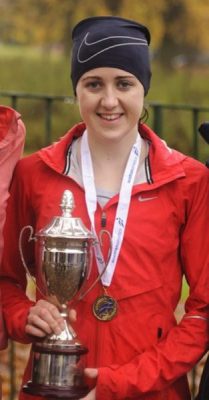 RENFREW plays host to a major national athletics event for the first time on Saturday. (November 5) And already the event is being declared a success with more than 1200 athletes on the entry lists – a record for these particular cross-country championships.

Adding to the excitement is the news that Laura Muir will defend the 4K title she won a year ago at Bellahouston Glasgow at Renfrew on Saturday – with the Commonwealth Record holder at 1500m and Olympian having been named Scottish Athlete of the Year last Saturday night.

The Short Course Championships are the second event in the Lindsays Cross Country season following a National Relays at Cumbernauld.

“Laura has regularly competed at cross country at this time of the season as part of her training and racing programme,’ said Muir’s coach, Andy Young.

“We feel doing that at this stage gives an endurance athlete a great base of fitness for the track season the following year. The conditions were extremely wet and muddy last year in Glasgow but she still won the race well and I understand the course at Renfrew is very flat, which should lead to good times over 4K.’”

The U15 girls and boys race first, over 2K, followed by U17 girls and boys over 3k. The Senior Women’s race, which has attracted almost 300 entries, goes off at 12.10pm and then the Senior Men’s race is at 12.35pm. Jake Wightman, the Scottish athlete who reached the European Championship final in the 1500m for GB in Holland in the summer, is among 493 names for that race.

“Renfrewshire Leisure have been extremely supportive about the whole idea and we are looking forward to Saturday. The Short Course is one of our fastest-growing events in terms of cross country and we need a large venue.

“The entry numbers have jumped from 700 only three or four years ago to just over 1200 this time, but with the support of Renfrewshire Leisure, help from our volunteers and officials and a common sense and patient approach by athletes and clubs, I’m sure it will be a successful day.

“Scottish National Championship medals are at stake for teams and individuals and it is also a big factor in Scotland selections for cross country for a forthcoming British event in Liverpool, so that certainly adds to the competitive element.”

Chief executive of Renfrewshire Leisure, Joyce McKellar said: “We have some of the best sports facilities in the country for both outdoor and indoor events.

“It’s testimony to these high standards that the course at KGV has been chosen to host such a prestigious race in the athletics calendar.

“We’re looking forward to a fantastic day of racing, particularly as there is such a high calibre of athletes competing.”
Muir and Andy Butchart won the 4K titles last November at Bellahouston but Butchart, who was also at the Olympics in Rio, misses Saturday’s race at Renfrew because of altitude training in the Pyrenees.

Nearby club Kilbarchan AAC are always strong in the younger age groups and, at U20 (who run within the Senior races), look to have medal contenders in Euan Gillham, Jemma Reekie and Laura Stark.